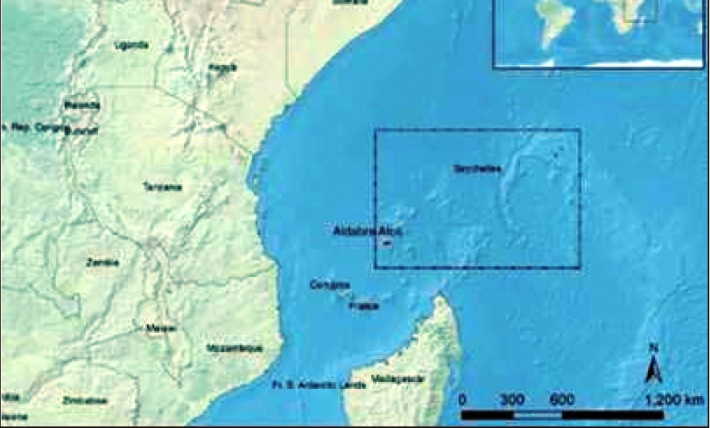 The Aldabra Atoll Special Reserve of the Seychelles has been recognised as an outstanding marine protected area (MPA) with a Blue Park designation.

This was announced by the Marine Conservation Institute and its international science council yesterday during their Our Ocean Conference in Oslo, Norway.

Aldabra was awarded the Platinum Level Blue Park status which is the highest level award. A total of 16 MPAs now hold the prestigious Blue Park Award indicating that they meet the highest science-based standards for marine life protection and management.

This Blue Park Award recognises outstanding efforts by the government of Seychelles, the Seychelles Islands Foundation, and MPA managers and staff who effectively protect this spectacular marine ecosystem now and into the future. This is Aldabra’s fifth international designation which recognises its unique and special ecosystems. Public recognition and an elevated status gives incentives to decision makers and nations to create additional well protected and managed MPAs.

Dr Frauke Fleischer-Dogley, chief executive of the Seychelles Islands Foundation (SIF), said, “We are thrilled to receive this prestigious award for the unique and spectacular treasure that is Aldabra Atoll. My personal mission over the last 30 years has been to ensure that nature conservation and protected area management is firmly based on science. This award recognises these efforts and shows the world that science-based management is possible in a region which has very limited resources for science and research. Commitment and strong collaborations by stakeholders at local, national and international level makes this possible. I hope that more protected area practitioners will follow this lead and that governments internationally will assist with resources so that we can achieve effective protection for all the special places on our planet.”

“Our goal is to recognise those MPAs like the Aldabra Atoll Special Reserve that deliver real results for marine life conservation and inspire others around the world to strongly protect at least 30% of the ocean’s most important places by 2030,” said Dr Lance Morgan, President of Marine Conservation Institute.

“We hope that Blue Park recognition of the Aldabra Atoll Special Reserve provides a shining example of regional marine conservation efforts and inspires others to follow the same path to protect our oceans for generations to come.”

Several different types of marine habitat exist at Aldabra Atoll Special Reserve: coral reefs, seagrass beds, rocky shoreline, sand bars and mangroves. Because of the varied habitats, this Blue Park is home to an abundance of many species found only in the Seychelles. It has highly diverse marine life, from green and hawksbill sea turtles, to manta rays, and  tiger sharks. Over 300 species of fish including 14 species of shark and 14 species of marine mammal have been observed at Aldabra and top marine predators exist in large, healthy populations. Aldabra hosts the largest breeding population of frigatebirds – a black, goose-sized seabird – in the Indian Ocean, alongside the endangered Napoleon wrasse – a massive coral reef fish that can grow over 6 feet long. Dugongs, marine mammals related to manatees, are occasionally seen in Aldabra’s waters. The Aldabra Atoll Special Reserve is difficult for humans to access because it is so remote. As a result, the ecosystem remains relatively intact, meaning the waters house healthy populations of many coral species and represent a natural Seychelles marine ecosystem no longer found around inhabited islands of the Seychelles. Scientists think Aldabra’s lack of human impacts also may make it more resilient to coral bleaching.

The other newly awarded MPAs include:

“Blue Parks like the Aldabra Atoll Special Reserve are the antidotes to the barrage of threats to life in our oceans,” said Dr Sarah Hameed, senior scientist of Marine Conservation Institute. “We may not be able to stop climate change impacts immediately, but we can create or maintain strongly protected areas in the right places today which will enable ecosystems to be resilient in the future.”

“This is a time of great peril for ocean life as it faces off against increasing marine industrialisation and climate change,” said Professor Douglas McCauley of UC Santa Barbara, director of the Benioff Ocean Initiative and a member of the international science council for Blue Parks.

A growing number of countries and conservation organisations are encouraging the creation of hundreds of new protected areas to reach the world’s Sustainable Development Goal (SDG 14) of 10% of our oceans by 2020 and the proposed goal of at least 30% ocean protection by 2030. Marine Conservation Institute is working to ensure as many MPAs as possible meet the high conservation standards of Blue Parks.

“Many of today’s marine protected areas do not offer effective protection and don’t protect the best places,” continued Dr Hameed. “They’re often ‘paper parks’ appearing to meet national commitments but lacking substance. But Aldabra Atoll Special Reserve meets science-based standards we know will protect the oceans for generations to come. If we elevate and bring recognition to Blue Parks like Aldabra, we believe it will encourage more countries and leaders to satisfy this critical standard going forward.”

Marine Conservation Institute works with existing and new MPAs to ensure they are well-designed, effectively managed, protect our oceans and deliver on their commitment to protect marine biodiversity for generations to come. MPAs that meet these standards can achieve a Blue Park designation, the highest award of conservation excellence.

Blue Park Awards were established by the Marine Conservation Institute to encourage governments to safeguard marine wildlife, secure critical habitats, promote resistance to climate change, and ensure the beauty of our oceans for future generations. The effort aims to assemble an effective network that protects and sustains marine life and habitats globally. Today there are 16 marine protected areas that have been awarded Blue Park status. In addition to awarding six new Blue Parks today, Marine Conservation Institute has launched collaborations with groups planning new marine protected areas in Argentina, Chile and Mozambique to ensure their efforts result in future Blue Parks.

Marine Conservation Institute, founded in 1996, works in the U.S. and globally to seek strong protection for at least 30% of the ocean by 2030—for us and future generations. Our focus on protecting the ocean’s most important places follows several lines of work: identifying and advocating for strong marine protected areas; improving laws and other tools to better conserve marine biodiversity; catalyzing effective conservation by recognizing and elevating the best marine protected areas as Blue Parks; and accurately reporting on conservation efforts with our Atlas of Marine Protection (MPAtlas.org).