Ex-Bel Eau and Plaisance A are the girls’ and boys’ winners of the youth hockey tournament held at Plaisance secondary school playing field on Wednesday.

The competition organised by the Seychelles Hockey Federation (SHF) was an initiative of past students of the Plaisance secondary school.

Matches in the girl’s league ran for 16 minutes (eight minutes each half) and Ex-Bel Eau beat Anse Boileau 3-2 in the first match before winning against Plaisance on a 2-1 score in the second encounter. Anse Boileau beat Plaisance 2-1 to finish in second position.

The trophies and medals for the winners and runners-up were presented by the school’s head teacher Raymonde Lavigne in the presence of the Seychelles Hockey Federation chairperson George Sicobo. She also presented certificates of participation to all players.

During the presentation of prizes for the youth competition, the Seychelles Hockey Federation took the opportunity to reward its best youth athletes for the year 2019. Thirteen-year-old Danisha Jules of Plaisance was voted the best hockey player in the girls’ category, while Dylan Tambara, 14 of Anse Boileau, was awarded as the best hockey player for the boys’ category.

Both Dylan and Danisha said that they expected to win the titles as they have been really showing a lot of commitments in the sport by attending all matches and training courses organised by the SHF.

Dylan and Danisha both started playing hockey at the age of eight years old.

A competition for primary schools will be held on November 9 at the Astroturf pitch, Roche Caïman. 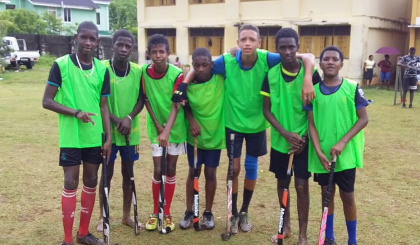 The Plaisance A boys’ team