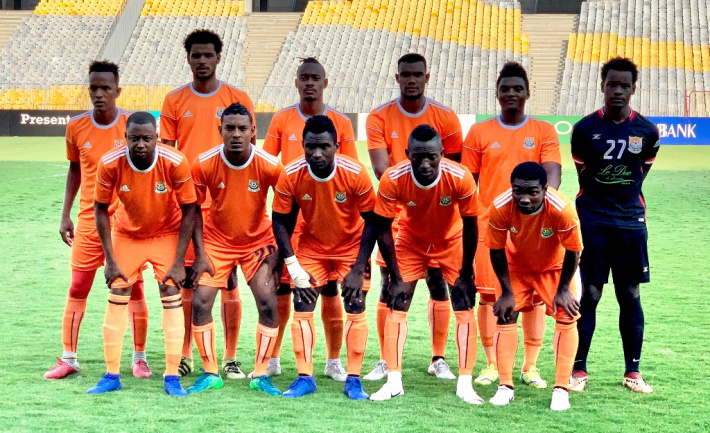 2018 Seychelles league champions Côte d’Or FC put up a very strong performance against Al Masry SC from Egypt in the away leg match of the preliminary round of this year’s TOTAL Confederations Cup on Sunday in Egypt. Despite all their efforts, the Seychelles champions lost the match 0-2.

Coach James Barra made three changes to the starting line-up who lost the first leg match 0-4 the previous week at Stad Linite. He gave young and talented goalkeeper Curtis Jean-Baptiste (nicknamed Dida by teammates) the nod ahead of experienced and first choice keeper Jean-Paul Lesperance. The other two changes were forced upon him as defenders Hervais Cesar replaced Jones Joubert who could not travel to the North African country because of work commitments, while Marcus Rose replaced Benoit Marie who was rested.

The rest of the team remained unchanged with Cliff Cesar, Sergio Barra and Oliver Bonte completing the back five. In midfield, was captain-of-the-day Colin Esther alongside Nigerian Peter Adesinah and Malagasies Kassah and Jonah, while Perry Monnaie spearheaded the Côte d’Or FC attack.

The game started at a high tempo with the Egyptians putting pressure on their opponents right from the kick-off. Côte d’Or very composed in defence and were able to hold back their opponents’ attack. In the 12thminute, goalkeeper ‘Dida’ made a wonderful save to deny Mahmoud Wadi’s goal-bound header from going in. The home side dominated possession but rarely threatened Côte d’Or’s backline.

It took them until the 21st minute to open the score after Fareed Shawky was given too much space to send a powerful cross in the Côte d’Or penalty area for Ahmed Gomaa to score with a powerful header.

The Egypt international almost doubled their tally a few minutes before half-time when his low shot hit the post after Hervais Cesar’s wonderful last minute tackle denied him a clear goalscoring chance with his initial shot. The teams went in the dressing rooms at half-time with the home side leading 1-0.

Gomaa finally made sure of victory for the home side in the 78th minute following a tap-in as the ball fell to his feet after ‘Dida’ saved Omar Kamal’s shot.

Despite Tony Kizito’s entry on the field to replace the injured Perry Monnaie, Côte d’Or FC couldn’t reduce the score as Al Masry SC, who currently lie fourth in the Egyptian Premier League, won the match 2-0 at full time.

This match concluded Côte d’Or FC’s adventure in this year’s African club competitions. After eliminating Fomboni FC from the Comoros islands in the first round (3-3 on aggregate, 2-2 away and 1-1 at home) of the Caf Champions League, Côte d’Or were knocked out by Mamelodi Sundowns in the second round (1-16 on aggregate, 0-5 at home and 1-11 away).

After Sunday’s match Côte d’Or FC’s manager Andre Bedier had this to say: “We are very proud of our players and coaching staff for the journey in this year’s African club competition. Sunday’s performance proves that we can play against big teams from the continent. We have gained a lot of experience from this journey which we are convinced will help us in the local competitions. We would like to thank the Seychelles Football Federation and the National Sports Council for financing our trips to the continent. Thanks also go to all our fans both in Seychelles and abroad who have always supported us.” 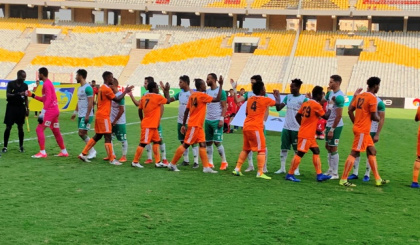