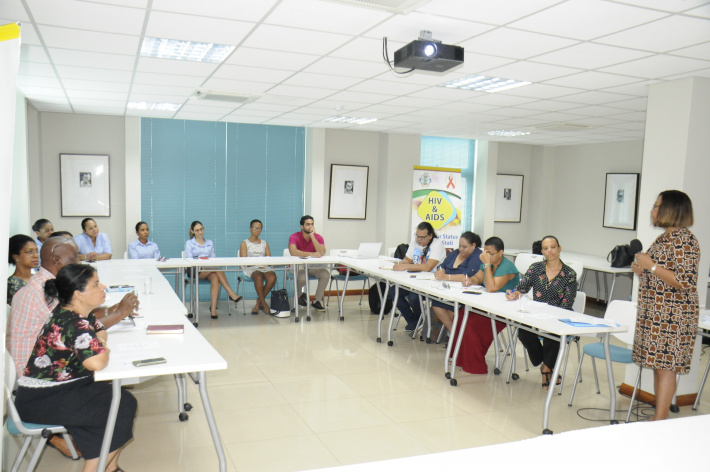 Media practitioners are being reminded of their role in educating the public, through correct reporting, on the HIV/Aids epidemic thus helping in eliminating stigmatisation against people living with the disease.

The call was made by the chairperson of the National Aids Council (NAC), Peggy Vidot, during a half-day HIV and Aids sensitising workshop for media practitioners. The workshop organised by NAC and its partners was held yesterday at the Seypec training room, New Port.

The aim of the workshop was to update the journalists on new developments in regards to the HIV/Aids epidemic so that, through their reporting, they better stimulate open and vibrant public debate about issues that underpin the HIV/Aids pandemic, such as unequal gender relations, social inequalities, stigma and discrimination and cultural norms among others.

The reference call was specifically focused towards the language and terms used by journalists to describe HIV and Aids as well as people living with HIV matter which provokes stigmatisation, despite tremendous advances in HIV treatment and prevention.

Mrs Vidot said that HIV/Aids is not just a health issue as it also affects the economic and social fabric of our society.

She noted that NAC and partners were happy to have the media onboard in the fight against HIV/Aids as the mass media has a considerable role in creating awareness about the epidemic thus not only a powerful medium of communication and awareness generation, but also a key behaviour change medium that can influence people’s opinion.

“Our hope is that as journalists you will report on HIV with accuracy and sensitivity to avoid stigmatising people living with HIV and to clarify common misunderstanding about the disease,” Mrs Vidot said, urging them to get the right and appropriate messages to the different groups within the society to bring about the necessary behaviour change.

In her presentation, Patricai Bacquero noted that certain words used by journalists can help foster positive attitudes about people living with HIV while other words and phrases chosen can fuel stereotypes, stigmatisation and discrimination.

Mrs Vidot said that Seychelles having assented to the United Nations declaration on eradicating Aids by 2030 through the 90-90-90 treatment targets, is through the national strategic plan for HIV and Aids counting on all partners including the media to achieve this fate.

Also attending the workshop among the journalists was a group of Seypec workers.

Text and photo by Patrick Joubert

Students repatriated from China, quarantined in France are back on Seychelles soil | 18.02.2020