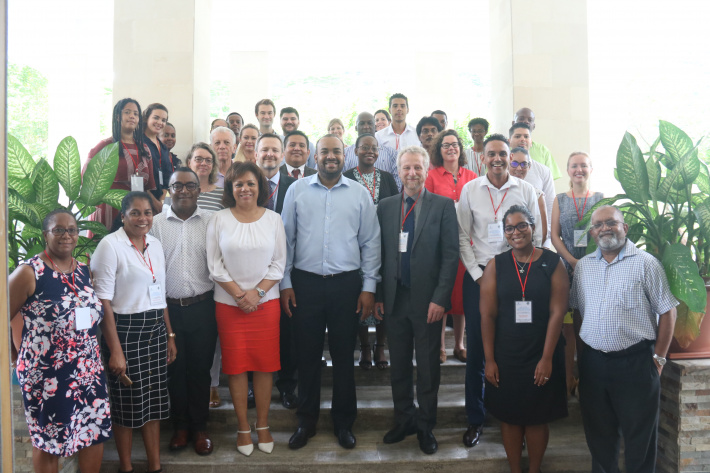 The first meeting of the marine protected area action group set up under the Commonwealth Blue Charter is being held in Seychelles at the Savoy Resort & Spa from November 5-7.

Seychelles is one of 12 countries that stepped forward to lead one of the nine action groups under the Blue Charter, more specifically the marine protected area action group.

“Seychelles is proud and incredibly excited to champion the action group on marine protected areas,” the Minister for Environment, Energy and Climate Change Wallace Cosgrow stated in his opening speech.

Minister Cosgrow added that the country has always attached a lot of importance to marine protected areas and the contribution these bring both to conservation goals and various sectors such as tourism and fisheries.

The country’s first great milestone in regards to MPAs was in 1969 when it enacted the National Parks and Nature Conservancy Act, and in 1973 Seychelles designated Ste Anne as its first marine protected area, which was also the first in Eastern Africa.

Up to 1997, five other marine protected areas were also established at Baie Ternay, Curieuse, Port Launay, Silhouette and Ile Coco.

More recently in 2012, former President James Michel committed 30% of the Seychelles waters for marine protection during the Rio Convention.

This is being made possible through the national Marine Spatial Plan (MSP) exercise wherein around 26% of our exclusive economic zone (EEZ) has already been designated as marine protected areas, of which 13.1% are high protection areas and 12.8% medium protection and sustainable use areas.

Another 4% is being evaluated and considered for protection before the end of 2019.

Prior to 2012, less than 1% of our waters were deemed protected areas.

Minister Cosgrow noted that Seychelles therefore feels it can share its experience and knowledge with other Commonwealth countries in this domain as well as to learn from other countries’ experiences.

On his part, the principal secretary for environment Alain De Commarmond observed that it is very important for countries in different parts of the world to come together to discuss and exchange ideas on such an important issue.

“The Commonwealth is well-spread out, from Australia to Canada and in between you have a number of islands, Africa and other countries. Through the action group, we are hoping that the action group can bring all of these countries from various regions closer together to talk and depending on how the discussions go, we can agree on certain mechanisms on how to communicate and share information,” PS De Commarmond added.

The action plan agreed on during the meeting will be presented by Seychelles at the Commonwealth’s Blue Charter Champions meeting next year.