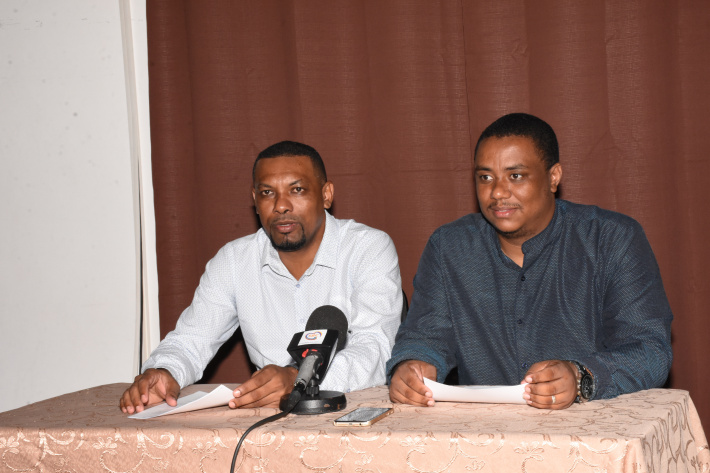 Although the Citizens Engagement Platform (Ceps) – a platform which represents the civil society in Seychelles – has categorised the 2020 budget as “generally good”, it has raised certain points of concern.

Ceps’ chairman, Jude Fred, and chief executive Michel Pierre yesterday provided the organisation’s response to the budget which was presented by the Minister for Finance, Trade, Investment and Economic Planning, Ambassador Maurice Loustau-Lalanne, on October 31.

The platform consulted with its members and listed the concerns of various citizens before establishing its stance on the budget.

Mr Fred explained that Ceps has engaged significantly with the government throughout the year but nonetheless it was not consulted on many elements in the budget – even those in which the civil society is directly included – and that the suggestions made by the civil society during the year was not considered for implementation.

“Every year Ceps make budget increase requests for us to ensure that we are up to date with the realities in our society and for recruitments, but our budget remains the same throughout the years,” he stated.

“We have also observed that the allocation of national grants which is given out to the civil society has also decreased. We want to know why this happened because we feel like these organisations are doing a lot of work in the community.”

He further acknowledged that Ceps is also concerned about the 9% increase in the 2020 budget compared to the 2019 budget, because this makes them wonder whether the government is spending too much and unnecessarily burdening the tax payers.

One main point of concern was the seemingly lack of measures in the budget to properly tackle substance abuse in the country.

“We did not hear much about how the country will tackle substance abuse. In fact, it was worrying for us when the minister spoke of the large revenue collected from the tobacco and alcohol manufacturing sector. As a sector which engages directly with citizens, we are concerned and want braver decisions to be taken to address substance abuse in our country,” Mr Fred stressed.

He expressed Ceps’ further disappointment in the reduction of allocation for both Apdar and the maritime security sector since this gives the impression that government is not strengthening the national bodies mandated to combat drug trafficking and addiction.

“If we want to combat drugs in our country, we have to put more resources towards ensuring that drugs do not enter the country. We are not privy to the details of why the reduction was made but we hope the National Assembly will help in providing clarity on this subject during their upcoming deliberations.”

Ceps also noted that the 10% increase on sale of alcohol will not help in reducing consumption but rather affect a family’s budget and requested that a national consultation be organised in regards to the fight on drugs and alcohol.

Another major point of concern for Ceps is the continuous subsidisation of Air Seychelles which Ceps is clearly not in favour of.

“From our understanding, Air Seychelles’ debt was written off by the government when it entered into a partnership with Etihad but we want to know what that amount was and how did Air Seychelles end up in debt again.”

Mr Fred explained that they have been seeking out this information for quite some while but have been unable to access the relevant files.

Ceps has also suggested that local Seychellois owned businesses should be offered the option to purchase shares in the national airline, so that it can be wholly-owned by Seychellois.

The quite recent purchase of the Cable & Wireless by Seychellois investors is proof that this is possible, Mr Fred indicated.

“We need to put mechanisms in place that would eliminate these debts. And as the platform representing the civil society, we are requesting for more transparency and for the information to be made available in public domain since it is the country’s money that is being used to pay Air Seychelles’ debts.”

Meanwhile, Mr Pierre called attention to the increases in government salaries, which it felt should be done in a consistent and systematic way since, for the very first time, wages and salaries will be higher than the allocation for goods and services.

“It is not Ceps’ intention to downgrade the value of public servants; we are happy when they receive a salary increase which helps their families to live a better life. But we feel that salary increases should be done systematically and in a way so that every Seychellois worker benefits, not only a certain group.”

As for the long service allowance scheme, Ceps again asked the government to be more consistent and firm with its decisions and policies since it initially exempted some categories of public servants from receiving the allowance and then changed its decision.

“One minute the government says one thing, and then a minute later it says something else. It has to be serious when making pronouncements especially those that touch a citizen’s life and emotions,” Mr Pierre clarified.

He also questioned why the government is selective on the schemes of service it decides to revise and asked for further clarification on the criteria used for scheme revisions.

He noted that members of the Nurses Association are still not satisfied with their scheme of service as their actual salary itself was not revised but rather they were only given a retention allowance of R3000, which was done to correct the injustice in the fact that expatriate nurses were already receiving this allowance.

Ceps believes that this would not be any different in 2020 as the government is struggling with many priorities, lack of capacity and bad planning.

As for the R1.49 billion allocated to the Agency for Social Protection for its various social welfare programmes, Mr Pierre said that this significant amount of money should be evaluated and new policies adopted to make sure that the country does not turn into a dependency state.

Mr Pierre also strongly spoke out against the construction of an Apdar rehabilitation centre at Cap Ternay, between Baie Ternay and Morne Seychellois national park.

Ceps had previously drawn up a more sustainable plan for this area which they have presented to the government at different intervals.

“We are of mind that the rehabilitation centre is a good idea but it is not the appropriate project for this area,” Mr Pierre highlighted.

Ceps urged the government to uphold its environmental principles and policies, and to further listen to the voice of the civil society on this matter.