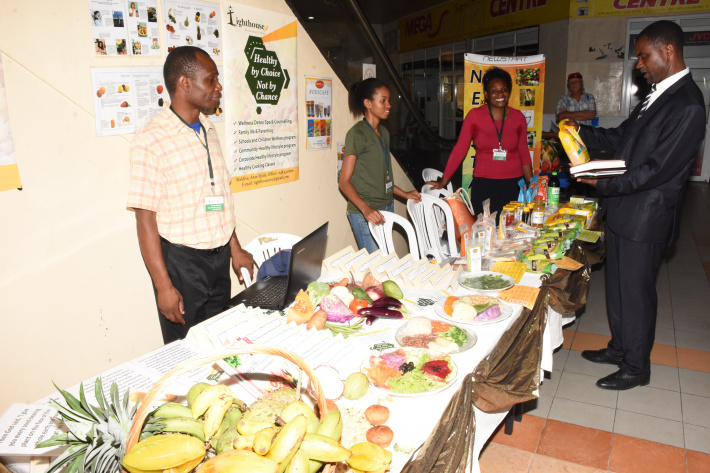 To commemorate the 30th anniversary of civil society in Seychelles, the Citizens Engagement Platform Seychelles (Ceps) yesterday organised a half-day exhibition to display the contributions and achievements of the civil society over the decades.

Civil society organisations play a fundamental role in encouraging public engagement in democracy and the society so as to bring about positive social change.

In Seychelles, the civil society became active thirty years ago through the establishment of the Liaison Unit of Non-Governmental Organisations of Seychelles (Lungos) in 1989 which became defunct on November 8, 2014 and replaced by Ceps.

Lungos had been in existence for 25 years before it was dissolved while Ceps is marking its fifth year.

In his welcoming speech, Mr Fred noted the important space which the civil society occupies in society since “it provides opportunities to bring communities together for collective action and voice out citizens concerns”.

He noted the groundwork that was done by Lungos to pave the way for a now very active civil society.

Back then, Lungos’ main objective was to have a singular voice for non-governmental organisation (NGOs) – a voice which lobbied, advocated and mobilised resources for grassroots interventions.

According to Mr Fred, it took over 19 years for Lungos to be officially recognised as the focal point for NGOs in Seychelles and this was when it signed a memorandum of understanding (MoU) in 2008.

This major milestone set the scene for greater achievements and the creation of Ceps in 2014.

“During the past 30 years, we have acted to protect, preserve, pursue and progress the common good of society. We have the capacity and ability for civil society organisations to participate in national and international development. We have actively promoted civil society as a strong pillar for development,” Mr Fred stated.

Vice-President Meriton further acknowledged these contributions in his address, adding that the result of the work that has been done by the civil society sector is visible for all to see.

He highlighted the MoU which was signed between Ceps and the government in 2017 formalising the framework of cooperation and partnership in development between the two.

“Since this day, we have established a joint working group which is very dynamic and meets every three months. It is co-presided by PS Rebecca Loustau-Lalanne and Ceps chairman Jude Fred,” VP Meriton stated.

“We have also set up a calendar of meeting between Ceps and my office and we meet twice a year. In these meetings we analyse progress made and evaluate the remaining challenges that should be addressed.”

Most recently, VP Meriton continued, Ceps and the government have ventured into a new initiative of open government partnership which is an innovative international initiative to improve governance and foster greater transparency and accountability.

Following the official opening of the ceremony, guests were invited to browse around the exhibition.

United for a Purpose (UP) was selling pillows, cushions and other items manufactured by the recovering addicts it assists.

UP is a youth-based NGO that was created in 2014 to mentor families and persons affected by drugs and support addicts through life skills training.

“This work has not been easy; it has been put together with the help of Apdar which gave us a place at North East Point where we are based, the sewing machines were given by the US embassy and the district administrators are working very closely with us to do monitoring after the training,” UP’s project manager, John Odhiambo, stated.

Mr Odhiambo explained that Ceps has facilitated funding for their various projects adding that “being a member of Ceps is very important because without Ceps we cannot do much”.

Also present was the Seychelles Bible Society, association of the Christian churches of Seychelles, who have initiated various projects over the years such as translating the Bible and an assortment of biblical stories and scriptures in Creole.

Margaret Maillet said that Ceps has assisted the society with various courses, workshops and short trainings, and hopes that Ceps would also facilitate their access to grants in the future.

The accompanying photos by our photographer Joena Meme show guests and visitors viewing the exhibition after the official launch ceremony. 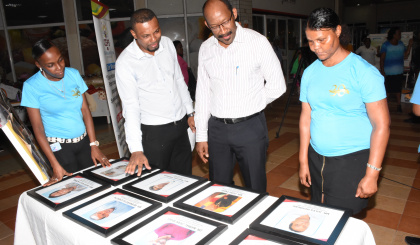 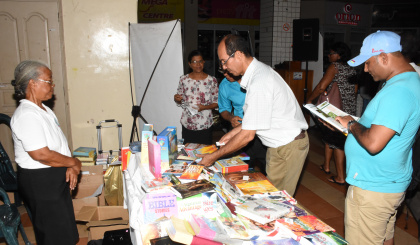