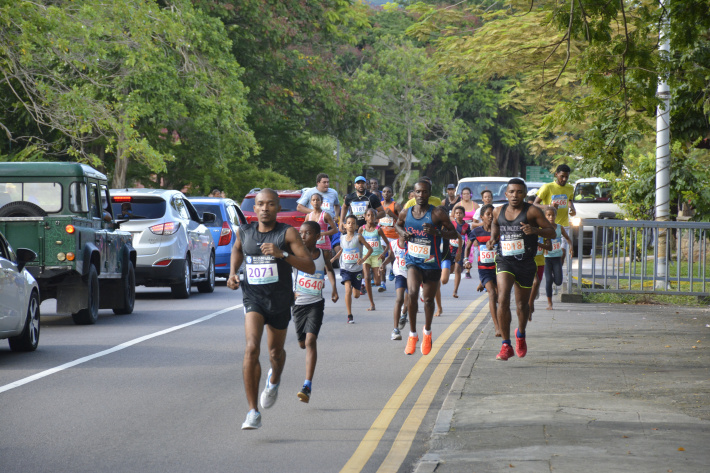 The organisers have confirmed that this year’s MEJ-sponsored Eco-friendly run will take place on Sunday November 24 and so far, 32 runners have registered for the half-marathon.

Sponsored by the MEJ Electrical, this years’ event will feature three races, precisely the 5km, 10Km and half marathon, with all three starting at Stad Popiler.

For the 5km race, the athletes will run 100 metres inside the stadium, before exiting through the gate facing the 5th June Avenue.

They will then turn right and run past the Jardin des Enfants park, over the roundabout and into Bois de Rose Avenue.

They will continue on Bois de Rose Avenue, pass the fuel station on the left and continue to the Linité roundabout beside the Stad Linite, before crossing the roundabout into Providence Highway and continue past the stadium grounds to the small gate at the end where there will be a sign saying “Turning Point 5 km”.

Once at the turning point, the runners will return via the same route to Stad Popiler through the entrance facing the 5th June Avenue.

Once inside the stadium, they will turn right and run the 300 metres around the north-end to the finish line.

As for the 10km race, the athletes will follow the same route as for the 5 km to the 5km turning point just past the Stad Linite, where they will continue towards the airport, past the Eden Island roundabout, the Airtel and Intelvision headquarters, until the Honda showroom where there will be the “Turning Point 10km” sign.

From there they will run back via the same route to the Stad Popiler and once again, upon entering the stadium, they will turn right and run the 300 metres around the north-end to the finish line.

For the half-marathon which will begin at 7am, the athletes will have to do one complete lap of the stadium, before exiting through the south-end gate onto the 5th June Avenue.

They will then turn left towards the roundabout at Independence House, before turning right again, along Flamboyant Avenue past Oceangate House and the Cat Coco Ferry terminal towards Perseverance.

They will continue on the 5th June Avenue, all the way to the Bois de Rose Avenue, where they will take the same route as the 10km runners up to the airport.

The athletes will then turn left into Francis Rachel Street and continue up to the Clock Tower.

They will then run down the Independence Avenue, before turning right to enter the stadium via the 5th June Avenue.

Once inside the stadium, they will turn right and run the 300metres around the north-end to the finish line.

Deadline for registration is Wednesday November 20. Registration forms can be obtained from the Eco-Friendly Marathon’s office at Annex Ocean Gate House.