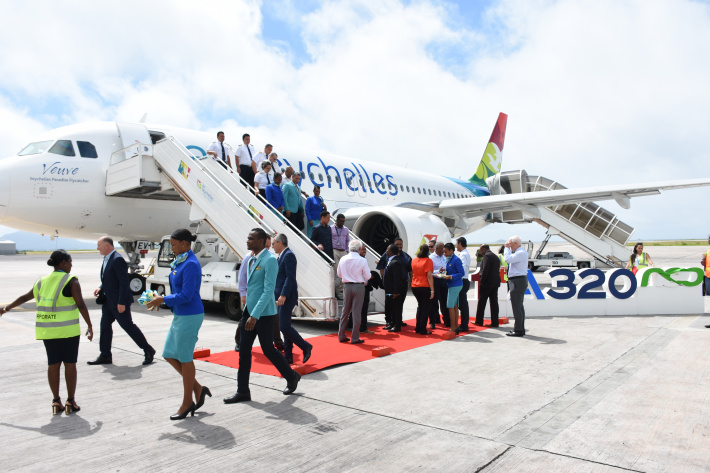 The soon to be signed agreement will give Air Seychelles the exclusive rights to provide ground-handling at the Seychelles International Airport (Photo: Joena Meme)

Agreement to be signed to secure Air Seychelles’ ground-handling operations

A tri-partite agreement between Air Seychelles, the Seychelles Civil Aviation Authority (SCAA) and the government is soon to be signed to provide the airline with the exclusive rights to provide ground-handling at the Seychelles airport.

Finance minister, Ambassador Maurice Loustau-Lalanne, revealed this yesterday during his response to the MNAs’ budget replies over the course of last week.

Minister Loustau-Lalanne noted that the exclusivity agreement will ensure that Air Seychelles remains the only company that will have the right to provide ground-handling services and this is to be signed before the end of this year.

An additional agreement will also be signed between Air Seychelles and SCAA which would act as a framework wherein both parties will be made aware of each others’ expectations and roles in regards to ground-handling services.

“I would also like to make known that ground-handling will not be used as guarantee for any future negotiations,” he pointed out.

“Air Seychelles remains the insurance policy which is necessary to safeguard the country’s tourism industry as the pillar of our economy. Today, this insurance comes with a price and we are all contributing to ensure that Air Seychelles has the capability to operate international flights,” Minister Loustau-Lalanne stressed yesterday.

Also in relations to Air Seychelles, Minister Loustau-Lalanne reiterated that the government is seeking to secure a bank guarantee of US $30 million for preferential shares due to the debt Air Seychelles has accumulated over recent years.

Negotiations that are ongoing with two banks in that regards are expected to be finalised by the end of November this year, the minister explained.

The bank with which the government finalises negotiations with, will provide Etihad with the necessary guarantee and in turn the government will give the bank a sovereign guarantee.

The government had to undergo this process due to the fact that Etihad refused to accept a direct sovereign guarantee.

A sovereign guarantee is a promise made by a government that all obligations will be satisfied when and if the primary party, in this case Air Seychelles, goes into default.

“The greatest risk which Air Seychelles faces in the medium term is its ability to repay this Projects Box Bond which will come to maturity, valued at US $21.7 million, on September 28, 2020 and US $50 million on June 1, 2021,” Minister Loustau-Lalanne said.

“Etihad has already guaranteed this bond. But we would have to find another solution to refinance this box in the medium term stretch,” he added.

The minister also addressed the renovation works at SCAA, which some MNAs had touched upon during their interventions.

He clarified that SCAA is working towards renovating the international terminal at the airport to elevate its standards, similarly to the domestic terminal.

The minister noted that it has been found more feasible to renovate the international terminal instead of constructing a brand new one which could cost up to US $200 million.

“The reason why SCAA is building a new head office first is so that it can remove its staff from its present head office. This will allow the company to have more room for the extension of the arrival lounge and installation of a second conveyor belt,” he explained.

There would also be construction to make more room to accommodate the immigration area, followed by the extension of the check-in area and, later, the departure lounge.

“It is primordial that the projects follow each other in this order so as not to disrupt the airport’s operations.”

The minister also clarified the aviation navigation fees for local operators (Air Seychelles, Island Development Company (IDC) and Zil Air) which are exempted from paying the fee for flights that are less than 200 nautical miles from Praslin.

“These fees are only applicable to flights from islands like Alphonse, Farquhar, Astove and Assomption. Operations from inner islands such as Praslin, La Digue, Fregate, Bird Island, Denis Island, Silhouette, Desroches, Coetivy, Remire and Poivre does not have to pay for the navigation charge. Only landing fees are applied,” he clarified.

In order to gain additional revenue from the many flights that are below 200 nautical miles, SCAA is in the process of amending the law which would remove this exemption and ensure that all operators pay the navigation fee no matter the nautical miles.

Another public enterprise which Minister Loustau-Lalanne mentioned yesterday was the Seychelles Public Transport Corporation (SPTC) which completed its series of negotiations with its insurance firm over the warehouse fire which occurred in August last year.

“They have agreed on a sum of R23 million, of which the first payment of R10 million has already been effected and they have worked on a schedule to repay this balance. SPTC will use this money for its capital projects in 2020,” Minister Loustau-Lalanne explained.

Minister Loustau-Lalanne touched on the subject of Cable and Wireless which was recently wholly purchased from Liberty Global by a group of Seychellois entrepreneurs.

He noted that Liberty Global, which acquired Cable and Wireless in 2016, owed the government a total of US $16.5 million which was lowered to US $14 million after the government agreed to buy two parcels of land owned by the telecom company, parcels V5326 and C3003, for the sum of US $2.5 million.

The US $14 million that was owed to the government was acquired by the group of Seychellois entrepreneurs, CWS Investment, during the buyout and CWSI have until the end of this year to pay the government this amount in full.

Further, CWSI and Liberty Global will have to pay a 5% stamp duty on the consideration value of the transaction.

The minister pointed out that the fact that Seychellois entrepreneurs have decided to buy a company that had been owned by international companies for over 125 years shows that the country holds a number of investments opportunities.

Additionally, after listening to the views of the MNAs and general public – who were staunchly against the decrease in postage and courier tax free personal allowance from R3000 to R1500 in January 2020 – Minister Loustau-Lalanne stated that the allowance will now remain at R3000.

Nonetheless, the government has decided to increase the customs processing fees announced in the 2020 budget from R50 to R100 which will take effect as from January 2020.

“This shows that this government is one which listens to its people,” he underlined.

The government has also acquiesced to a policy change which would allow a foreign employee who has been employed in Seychelles for over 10 years, to leave the country for one year and then come back to work for the same employee.

This would make it so that they would not have to pay for the new category of GOP for expatriates who are in the country for more than 10 years and which expects to increase from R500 to R5000 per month.