At the end, all three were subsequently promoted by the continental director for Africa, Shihan Phillip Moustache 7th dan who conducted the grading with the help of local branch chief Shihan Phillip Verghese 5th dan as the grading officer.

Ten other students going for lower grades also took part in the grading which started at 2pm and ended at 6.30pm.

During the grading session, the karatekas were required to demonstrate all the basic and advanced techniques of Kyokushin Ryu Karate which include Ido Kihon (standing basics), Ido Geiko (moving basics), Renraku (combinations) and kata (forms). They were also required to perform numerous strength and endurance exercises as well as katas up to the grade they were attempting.

Kumite (fighting) was undoubtedly the hardest part of the test with the number of opponents varying according to the grade being attempted with the fights being conducted under Kyokushin’s full contact rules. Their opponents were all black belt holders including the three Shihans. For his 3rd dan grading, Luigi Adrienne had to fight against 40 opponents. Luciano Mavunga fought 30 opponents for his 2nd dan while Richel Rabera fought 22 opponents for her 1st dan. A large crowd of their colleagues, parents and friends who had turned up to witness the event cheered them on throughout all the fights. All the karatekas demonstrated a strong spirit throughout the event and were all still standing by the last fight.

Congratulations to all the newly promoted black belts. 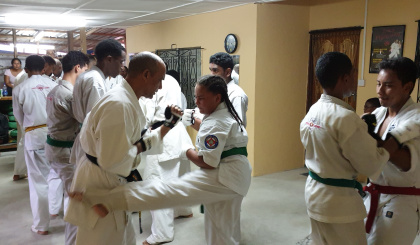 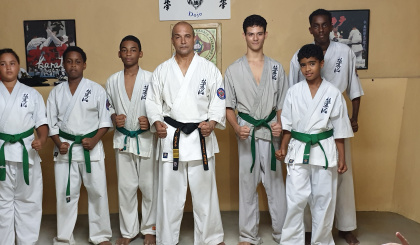