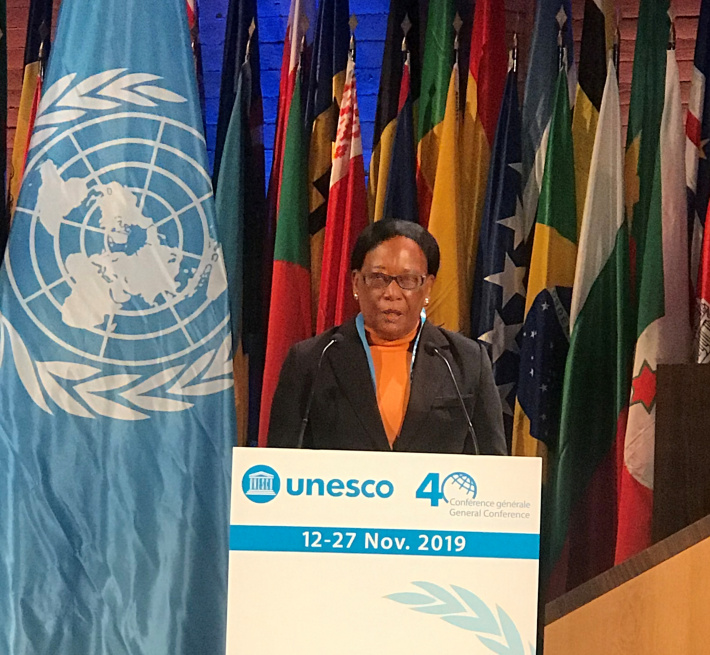 Minister Simeon delivering her statement at the general conference of the Unesco (Photo source: Ministry of Education and Human Resource Development)

Taking the floor during the general policy debate segment of the 40th session of the general conference, Minister Simeon highlighted the various areas in which Seychelles has benefitted from Unesco’s assistance.

These range from protection of the country’s tangible and intangible heritage to TVET (Technical and Vocational Education Training) through STEM (Science, Technology, Engineering and Mathematics).

She availed of the opportunity to urge member states of Unesco to support Seychelles’ application to have moutya inscribed on the Representative List of Intangible Cultural Heritage of Humanity as well as its initiative to have the Institute of Early Childhood Development (IECD) recognised as a Category II Centre under the auspices of Unesco.

Minister Simeon, who is heading a five-member delegation to Unesco, also took part in the Ministerial Panel in the context of the 7th SDG 2030 Steering Committee meeting.

Yesterday she addressed the general conference again, ahead of a vote on the IECD.

The general conference is the highest decision-making organ of Unesco and this 40th session is being attended by most of the 193 members of this specialised agency of the United Nations. The conference, which kicked off on November 12, will last until November 27.

Press release from the Ministry of Education and Human Resource Development