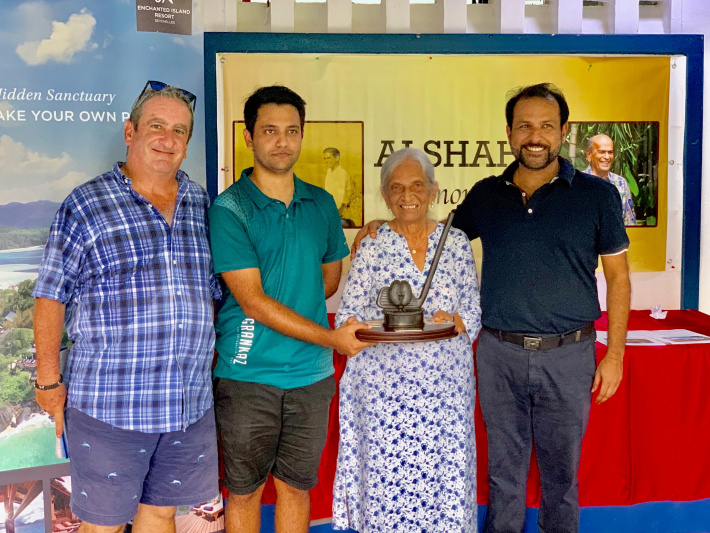 Young Gibran Rizvi is the winner of this year’s AJ Shah Memorial played at the Seychelles Golf Club on Saturday November 9 and which once again attracted a large field of golfers.

AJ Shah was a longstanding supporter of golf in Seychelles, having sponsored the annual AJ Shah & Associates Golf Challenge for 10 years since 1998, making it one of the highly-anticipated events in the local golfing calendar. Following the passing of AJ Shah in 2015, his son Sunil, decided to reinstate the event in memory of his father.

The tournament was held in the Stableford format and the course conditions were challenging and humid with a fewlight passing showers.

Early leads at the end of the front nine were established by Robin Johnstone with 21 points, Adrian Andrade, Gibran Rizvi and Joe Elisa with 20 points apiece. With pretty similar scores, the back nine was all to play for.

Young Gibran Rizvi had a brilliant back nine with 22 points to finish with 42 points as the outright winner and lift the beautiful trophy designed by well-known local sculptor Tom Bowers, with a miniature coco-de-mer representing a golf ball. His winning also included a complimentary one-night stay for two at JA Enchanted Island Resort.

Adrian Andrade, playing off a 2-handicap, also had a fantastic round playing one-under gross and came second with 39 points beating Joe Elisa on the countback. The prizes included a three-course meal for two, with a bottle of wine at JA Enchanted Island Resort.

Margaret Pragassen won the best lady prize with 33 points and William Weidner, with a superb six-under gross, won the best pro prize. The best front nine and best back nine positions were won by Robin Johnstone and Ron Barbe. Veteran golfer Alix Esparon won the closest to the pin and marathoner Tom Leach won the longest drive. The bogey prize for most golf was won by Paolo Chionni.

The prizes were distributed by Sunil and his mother, Jayshree. As has been a tradition, a toast was held in memory of AJ Shah after which an emotional Sunil thanked the members for their enthusiastic participation and reiterated that the AJ Shah Memorial Golf Tournament is here to stay.

Club captain Michael Lavigne thanked the sponsors for their longstanding support to golf in Seychelles and the club.

Contributed by the Seychelles Golf Club