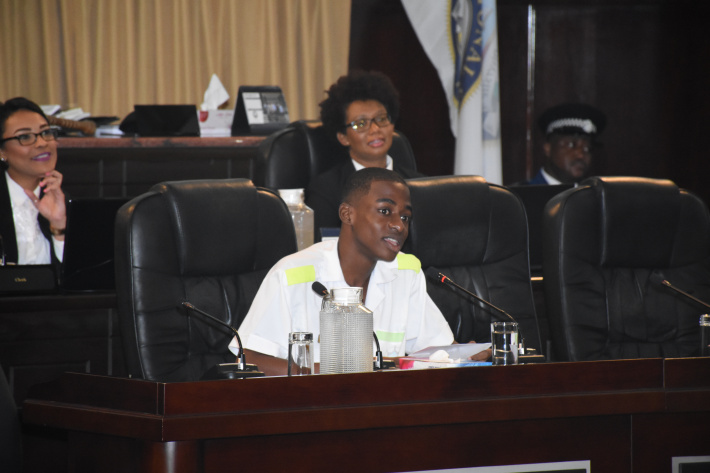 Misael Bristol won the hearts of all TV viewers and people who listened to him on the radio yesterday as he addressed the National Assembly with so much conviction.

The young boy delivered his message so convincingly that both leaders in the National Assembly had only words of praise for him. Even on social media he became an instant star.

For the second time in the history of the National Assembly in Seychelles, a child addressed the House yesterday morning to amplify the voices of all children in Seychelles in commemoration of World Children’s Day 2019.

Misael Bristol, a secondary student from Mont Fleuri school, supported by the National Council for Children, addressed the House, urging the leaders of the legislature and the country as a whole to reflect on issues affecting children and to take concrete actions.

Misael voiced his concerns and views on behalf of all children, on pertinent and current matters affecting their rights such as corporal punishment, need for educational reforms, exposure to social media, drug abuse and mental health issues.

He reminded all Seychellois adults that children’s behaviour are clear reflections of the society’s moral principles and he made an appeal to all adults to lead by example.

He called on members of the National Assembly to make a difference in the lives of children by stating “our parents have elected you in these posts, please take our interests at heart. Make the most of your mandate to make a difference in our lives. If only you could make the necessary changes, changes in laws and policies and bring forward motions that will guarantee the protection of children”.

With the whole nation and members of the National Assembly listening, Misael made a plea for more investment in extra-curricular and communal activities for children and urged everyone to implement positive solutions.

He also noted that there is still a lot of work to do to offer children the opportunities to take part in decision-making and express their opinions.

The young student was praised by the leader of the opposition, Wavel Ramkalawan, for his ability to give his speech with such conviction and seriousness.

“You need to aim high and aim at becoming the President of Seychelles,” Mr Ramkalawan told Misael.

Giving his reaction to Mr Ramkalawan’s words, Misael said: “Yes, we all have to aim high and now this is my aim – to be the President of Seychelles.”

The address came as a special request from the media, youth and culture committee who recognises that children represent the future and that their voices need to be heard on a number of current and vital issues that affect their lives as citizens. This special occasion has been organised in collaboration with the National Council for Children with the aim of providing young people with the opportunity to express themselves in important decision-making forums.

Views of the leader of government business, Charles Decommarmond and leader of the opposition, Wavel Ramkalawan:

Leader of government business, Charles Decommarmond: “Misael has asked the National Assembly to vote on laws to protect the rights of children. Immediately I feel that we need to move faster in some areas such as freedom of speech on social media which will help protect the children. The second thing that we need to focus on is pregnancy among young school children. We keep talking about this issue as there is an established age to take contraceptive and an age to have sex which is contradictory. The National Assembly is waiting for the law to come in to have a harmonised regulation. There are also many other social issues that need to be addressed in order to protect the children such as responsibility of men in taking care of their children. We have to seriously look into this issue and make the men, who do not make contributions for their children, work instead of just sending them to prison.”

Leader of the opposition, Wavel Ramkalawan: “I really admire Misael for his message he brought today to the National Assembly. The message is clear, whatever comes out of the mouth of children is the truth. We are here as representatives of the masses which include the mothers and fathers of the children. We have to be conscious in the way we are doing our jobs and make sure that all bad things are eradicated. Mainly now when we are reviewing the budget, we have to make sure that money is being used appropriately so that the society can develop. We are trying to create the future of our children, and as a National Assembly we have the duty to do the right thing. Misael has set out a few pertinent things which unfortunately the society is not reacting to for the moment. The government needs to move fast on the necessary laws to protect the children and the youth and as National Assembly we will do the necessary. He also talked about teenage pregnancy and the responsibility of parents.” 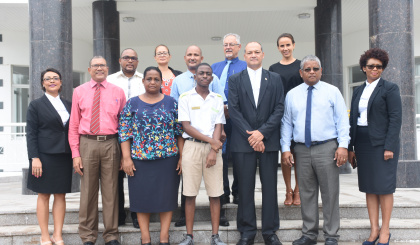 Misael in a souvenir photograph with representatives of the National Assembly, NCC and Ministry of Education (Photo: Thomas Meriton)