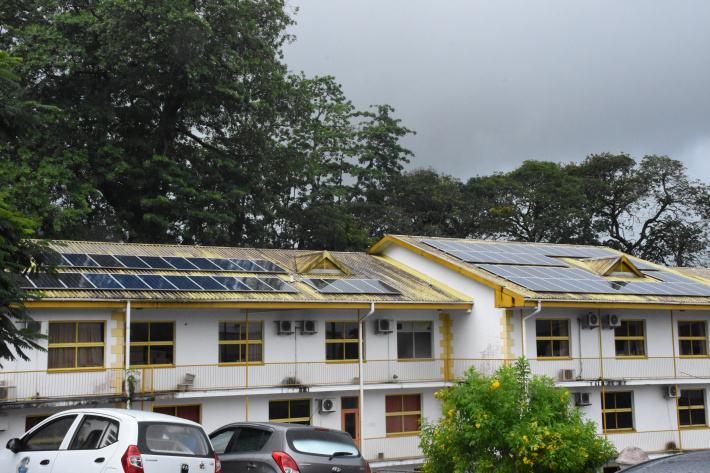 The Ministry of Health has benefitted with the installation of a total of 390 kilowatts (kW) of rooftop solar panels, funded by the Indian government, which have been placed on the Yellow Roof, Blue Roof and Green Roof buildings at the Seychelles Hospital as well as on the roofs of different health centres across the country.

The ceremony to inaugurate the installation of these new solar panels was held yesterday at the Seychelles Hospital and follows similar inaugurations at the National Assembly and the Barabarons transit homes.

It was the Minister for Environment, Energy and Climate Change Wallace Cosgrow and Indian high commissioner (HC) to the Seychelles General Dalbir Singh Suhag, in the presence of the Minister for Health Jean-Paul Adam, who officially unveiled the commemorative plaque in honour of the donation.

This project is one component of a much larger project to install 2 megawatts (MW) of solar panels on selected government buildings and over 500 homes under a grant of US $3.44 million from the Indian government.

This also includes a solar farm of 1 MW on Ile de Romainville.

According to the Ministry of Health, the newly installed solar panels will help save around R2 million per year in electricity costs – savings which Minister Adam stressed can be re-invested to provide patients with better and quality health care.

In his address, HC Suhag stated that the government of India has pioneered various initiatives to tackle climate change and encourage sustainability such as through the International Solar Alliance (ISA).

As one of the founding members of the ISA, Seychelles will also be provided with US $8.7 million under a development partnership arrangement directly from the people of India, HC Suhag revealed yesterday.

“This would cover rooftop solar installations on various government buildings, housing units and even solar lights in various locations on Mahé, Praslin and La Digue. This is the level of commitment and importance that the world’s largest democracy shares with its friend Seychelles,” the high commissioner stated.

On his side, Minister Cosgrow related that Seychelles remains committed to its ambitious climate action plans and to meet its target to generate 100% of the country’s electricity from renewable sources by 2050.

He concluded by extending the country’s gratitude to the government of India for their role in helping Seychelles achieve its goals and to mitigate climate change.