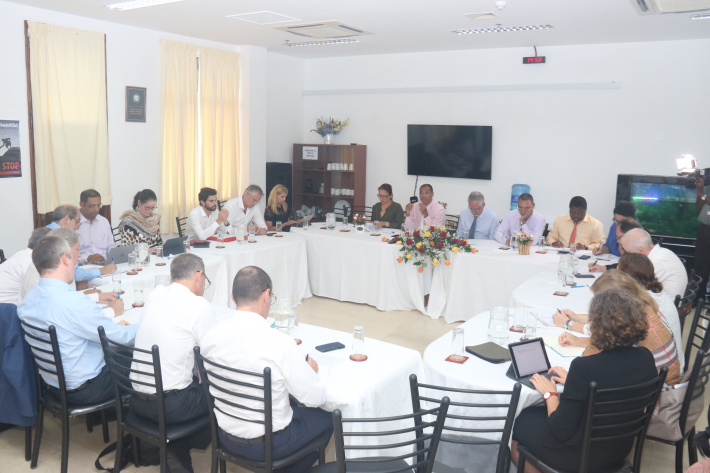 The meeting between IAC and the EU delegation (Photo: Thomas Meriton)

The International Affairs Committee of the National Assembly met with a high- level delegation representing the European Union yesterday afternoon, as part of the 7th EU-Seychelles political dialogue.

The delegation, comprising ambassador of the European Union (EU) to Seychelles Vincent Degert, ambassadors and representatives from 11 EU member states discussed with the International Affairs Committee (IAC), headed by Honourable Jean-François Ferrari, avenues for strengthening relations between Seychelles and the EU as well as areas for further cooperation in trade and maritime security, among others.

Head of the committee, Mr Ferrari asserted the importance of involving the parliament in negotiations between the government of Seychelles and international partners on account that members of the assembly can make valid contributions to the discussions and negotiations.

“It was important for us as a parliament to meet with the ambassadors of the European Union. There are many agreements that are up for renegotiations, and we feel that we can bring extra value to the negotiations by being part of the discussions. For the moment, it has not happened but we keep pushing the government, through the department of foreign affairs, to involve us from the onset when we start negotiating, as opposed to the end when we need to ratify and sign those agreements,” said Mr Ferrari.

“These agreements will be the fisheries partnership agreement which comes to its end towards the end of January next year, the security patrol unit under EU NAVFOR Somalia Operation Atalanta which will end next year in September or October 2020, there are certain changes that we need to be doing on the laws applying to anti-money laundering and financing of terrorism, agreements that are of an international dimensions and we need to be a part of it,” he said.

Following the meeting, the delegation met the leader of government business in the National Assembly Charles de Comarmond and members of the United Seychelles (US) party.