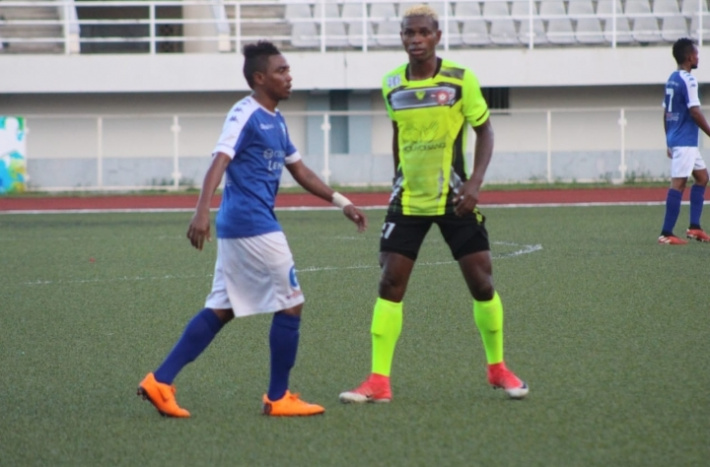 St Michel went top of the SeyPearl Premier League as they had to come from behind to edge bottom club Au Cap 2-1 at Stad Linite while on Praslin, LightStars swept aside Revengers 3-0 and on Friday, Anse Reunion mauled Victoria City 5-0 at Stad Linite.

St Michel edged Au Cap 2-1 thanks to a brace from substitute, Malagasy Francis on Saturday afternoon at Stad Linite to steer them to the top of the league standings.

However, St Michel must breathe a big sigh of relief to collect all three points as they seemed to have taken their opponents for granted and were almost humiliated if not for a late salvo by Francis and may be the Au Cap coach Roger Labonté was slow to make the substitutions.

St Michel had made a couple of changes but had the first real chance in the 9th minute from a good run by Malagasy Oliver Livakely before trying to bend the ball past goalkeeper Terence Mondon who pushed the ball out as far as St Michel skipper Malagasy Hassan Aly but he drove the loose ball over the crossbar.

Au Cap responded in the 21st minute when Ghanaian Jonas Baffoe skipped past a couple of tackles to slip a beautiful ball to Oliver Camille who had sneaked behind St Michel’s defence but with only goalkeeper Jalyl Servina to beat, he amazingly shot wide.

St Michel also fluffed a clear chance in the 28th minute at the other end from Aly’s superb threaded pass to Jean-Claude Berlouis who unselfishly squared to Livakely who looked odds to score but his low shot was brilliantly blocked by goalkeeper Mondon.

Au Cap then punished St Michel’s sloppy defending in the 39th minute from Gavin Domingue’s defence splitting pass to Thierry Camille who face to face with goalkeeper Servina, stabbed the ball home to give his team a 1-0 lead to set the cat among the pigeons.

St Michel almost drew level three minutes later from Malagasy Evariste’s rasping free kick which was met by Norris Bibi’s glancing header which came off the crossbar before goalkeeper Mondon was able to clear the danger and enable his team to go in for half-time in the lead.

St Michel came back for the second period with all guns blazing and in the opening minute, Evariste forced a top drawer save out of goalkeeper Mondon after defender Dean Balette had handled just outside the penalty area.

In the 52nd minute, St Michel were denied a penalty by referee Darrio Landry when Au Cap defender Jemmy Anacoura brought down Evariste in the penalty area but the official awarded the infringement but placed the ball on the edge of the penalty area much to the anger of the St Michel supporters.

Evariste thumped the resulting free kick on target but Ghanaian Baffoe, who was playing in defence on Saturday, cleared the goal bound ball to safety with his head on the goal-line.

In the 54th minute, referee Landry though could not endure continued insults from Au Cap substitute goalkeeper Christopher Legaie and he issued a straight red card to the player who had to leave the bench.

Au Cap were under the cosh as St Michel sent wave after wave of attack and they finally got a breakthrough in the 81st minute when goalscorer Camille allowed Livakely to glide past him and the St Michel midfielder who had weaved his way from his own half produced an inch-perfect cross in the box where Francis met it with a spectacular diving header which found refuge in the net to make it 1-1 as the St Michel camp celebrated.

Two minutes later, Livakely flashed another cross across the Au Cap goalmouth and Francis got the slightest touch to help the ball into the net for a 2-1 score to complete a remarkable recovery by St Michel.

The Anse Aux Pins-based team also got lucky in the 91st minute when Norris Bibi kicked out at substitute Justin Riaze who had stopped him in his stride illegally but referee Landry booked Riaze and allowed Bibi to get away scot free while the players of coach Nigel Moustache collected all three points which propels them to the top of the league standings but manager Andrew Jean-Louis was far from pleased with his team’s display.

“We did not play to the expected level and it was a poor performance as the players took things for granted due to our opponents’ lowly position and it almost backfired and this is not acceptable but we are just grateful to win all the three points,” St Michel manager Jean-Louis said.

For his part, Au Cap club president Nichol Dogley, whose team were minutes away from a giant-killing act, was generally happy with his team’s improved performance.

“It was a much improved performance from my team and we had a good first half but we had to defend for long periods in the second half and the players ran out of steam and conceded two late goals but overall it was an encouraging showing,” Au Cap club president Dogley told Sports NATION.

LightStars brought Revengers down to earth with an emphatic 3-0 victory at Stad Amitié on Saturday afternoon.

Ian Vel opened the scoring for the Airtel Cup holders and Malagasy Mario Ravo made it 2-0 at half-time.

Bertrand Lablache sealed the win for the players of coach Ted Esther who ended a three-game losing streak while Revengers came back to earth after claiming the scalp of reigning league champions Côte d’Or the previous weekend.

La Digue side La Passe’s home fixture against unbeaten Foresters scheduled for Saturday was called off due to the prevailing bad weather on La Digue.

Anse Reunion broke the deadlock in the 25th minute as Malagasy Iavo fired past goalkeeper Ritchie Dubel to make it 1-0 and a minute later the same Iavo added a second for a 2-0 score.

Malagasy Christophe also got on the score sheet with a strike on the half hour mark and he bagged his brace in the 38th minute with a delicate lob over goalkeeper Dubel to make it 4-0 at half-time.

The players of coach Basil Hoareau made it 5-0 in the 64th minute when captain Warren Bibi’s cross-cum-shot sailed over goalkeeper Dubel to make 5-0.

Anse Reunion though suffered a setback when their coach Hoareau was controversially sent to the stands by referee Nelson Emile in the 66th minute for just stating his feeling about a yellow card issued to Malagasy Christophe but in the end it did not matter as City were soundly beaten and their manager Chanel Monthy was not happy with the players’ poor performance.

“We are going through a difficult period where the players are irregular at training and they are not putting enough effort to improve our results, so we will need to contemplate bringing in new players to the squad soon,” explained City manager Monthy.

As for Anse Reunion coach, Basil Hoareau, he was quite pleased with the result in this away fixture.

This is a good result for my team as we did what was required to win comfortably though we still need to play better, but this win will definitely bolster morale for our next match against St Louis,” Anse Reunion coach Hoareau related to Sports NATION.