Zil Air, the premium provider of aerial limo services in the Seychelles, has added a new aircraft to its fleet.

The latest acquisition, ADAM, touched down at the Seychelles International Airport on Friday November 29 after a 4,500 nautical mile journey from the Tecnam factory in Italy where it was built.

ADAM departed the Tecnam base in Italy on November 23, 2019 under the command of captains Gerhard Geyer, John Rachel and Anthony Hoareau.

Commenting on this new acquisition, Zil Air’s executive director, Francis Savy, said: “The brand new Traveller has been in design and development for a number of years. Good things take time and final result is an aircraft answering all Zil Air’s operational requirements and it was purposefully tailored for Seychelles operations.”

“Cutting edge avionics by Garmin offers pilots all the information they require for day and night operations, making night operations to equipped airfields another key factor in the choice of aircraft.

“Tecnam embraced Zil Air as a partner from day one, and our team worked alongside Tecnam to customise this brand new aircraft to meet our exact requirements. As of date, this makes Zil Air the second world-wide Operator, and the only one outside the USA, to offer the Traveller in Commercial Operations

“We are proud of our team and their tireless efforts to ensure the aircraft landed in Seychelles ready to commence operations in December 2019. S7-ADM was added to Zil Air’s AOC (Air Operators Certificate) last week by the SCAA, another milestone entirely driven by our in-house team.

“Team Zil Air extends its appreciation and thanks to all stakeholders, the government and people of Seychelles, the SCAA, Team Tecnam, Mauritius Commercial Bank, Zil Air staff members and last, but not least, our business partners and customers who have been at the centre of our growth and development since we opened for business.

“The induction of a modern aircraft into our fleet re-enforces Zil Air’s commitment to safety and to continuing safe operations serving our customers and employees alike. We remain committed to providing the highest aviation operational and safety standards. We continue to offer ‘more than just a flight’ from all at Team Zil Air.’

Zil Air commenced commercial operations on April 1, 2009 and operates 7 days a week supported by a young and dedicated team of 85 personnel. 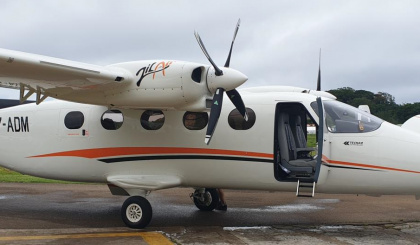