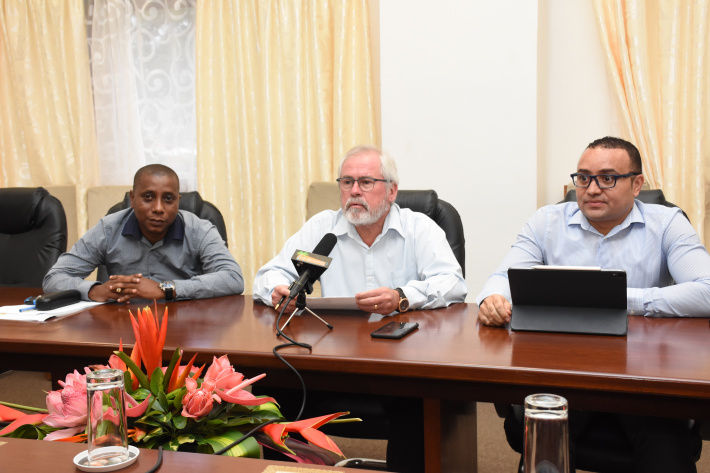 Seychelles is sending a protest letter to the French Prime Minister Édouard Philippe to express its disappointment a day after it was publicly blacklisted by the French authorities which cited insufficient cooperation on issues of financial transparency.

Yesterday, a day after the French authorities through the minister responsible for public action and accounts Gérald Darmanin announced publicly that the French authorities were adding Seychelles together with Anguilla, Virgin Islands and the Bahamas on its blacklist of countries, citing insufficient cooperation on issues of financial transparency, the local authorities have expressed their disappointment. The news has been picked up by many international press.

In a hasty meeting with the press late yesterday afternoon, the Minister for Finance, Trade, Investment and Economic Planning Maurice Loustau-Lalanne, the secretary of state for finance, trade and investment Patrick Payet as well as Dr Steve Fanny, chief executive of the Financial Services Authority (FSA), explained the government’s position faced with the situation and expressed its frustration and disappointment.

Minister Loustau-Lalanne explained that what has happened is something that the government and other concerned authorities always want to avoid because its impact on our country’s economy can be devastating. And it can also directly affect our banking relations with the French banks.

Minister Loustau-Lalanne said the government had received a communication from the French government through its Ministry of Foreign Affairs on November 24 and immediately engaged in talks with the French resident ambassador here to explain our position and stress that more time is required to explain Seychelles’ position and what it has been doing since 2015 to improve its situation in relation to exchanging information with other countries, making it clear that the authorities would soon explain the country’s position by way of a letter.

The minister also said that in this case in particular it relates to exchanging information with the French authorities on French companies working in the offshore sector here, but which are avoiding to pay taxes in their country.

“We have to provide the information when we are requested to and the French authorities stated that since 2015 they have been requesting certain information on some 76 companies but to date information on only 55 companies have been forthcoming representing around 70% and still they are not satisfied,” Minister Loustau-Lalanne pointed out.

Dr Fanny said among the challenges the authorities here face are that information the French authorities seek relate to offshore companies which have dissolved or those that are no longer operating in Seychelles like Mossack Fonseka for instance which has closed all its branches worldwide including Seychelles.

“All the corporate service providers (CSP) under Mossack Fonseka have closed down and there are no provisions in the laws which state that information on companies that have closed down should be guarded,” said Dr Fanny.

Minister Loustau-Lalanne said it is unfortunate and regrettable that there has been no interaction between the French and Seychelles authorities since the communication it received on November 24.

“This is why I am disappointed because I had an agreement with the French ambassador that Seychelles’ position would be explained through a letter to be sent to the office of the French Prime Minister. The letter of explanation was sent to the ambassador yesterday afternoon,” Minister Loustau-Lalanne explained. But he said the decision to add Seychelles to the blacklist was taken on Sunday.

He said the only thing now is for Seychelles to work to amend, with the shortest delay possible, all its related laws to make them compliant in order to be removed as soon as possible from the blacklist.

He stated February or March next year as the earliest that Seychelles can be removed from the blacklist.

He went on to stress that Seychelles is abiding by the Organisation for Economic Co-operation and Development (OECD) standards and according to its last report the country was largely compliant and has strived to remain so in its next report expected to be released in February next year.

SS Payet pointed out that the main problem was with the definition of accounting information which is not clear enough. He said they will work more closely with the French authorities to better understand and know exactly the type of information they want so that both parties better understand each other and the French authorities are better aware of the work underway to address the situation and the challenges that Seychelles faces.

He admits that a lot of work lies ahead to clear Seychelles’ image and reduce the impact on our economy.