The theme of the end of year was ‘Protecting the bees’. All the small children were beautifully dressed as bumble bees and bees and others were dressed as small angels. Sitting for more than 30 minutes was a struggle for the young children, but they managed to deliver a wonderful show.

The hall was packed with parents admiring their little angels.

The manager of the school, Nadine Andre, noted that “the first year was fruitful and we started with 17 children and we ended the year with 48 children. Interhearts Montessori pre-primary school has seven teaching staff and we are proud to see the children performing today. The good news is that as from next year, we are introducing the Kindergarten Two. Our mission is through education help inculcate high moral values that will contribute towards the betterment of society”.

The school also celebrated the Bicentenary of the Bab and Christmas by interpreting some prayers – O God Guide me and O God educate these children and some Christmas carols and songs such as ‘Happy Xmas’, ‘Joy to the World’, ‘I think you are wonderful’, ‘Jingle Bells’, ‘Petit Papa Noel’ and a special song by Florette Botsoie interpreted by the teachers.

Despite the fact that the school was victim of a break-in the day before the show, still the management of the school together with the parents were able to put up the show. The parents contributed for the snacks and towards a gift for their child.

The show ended with a party for the children and parents.

Text and photos by Vidya Gappy 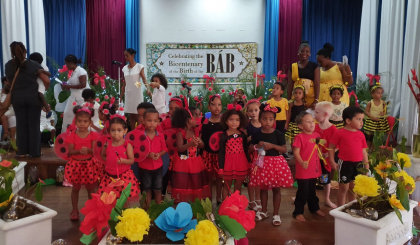 The small children impressed their parents 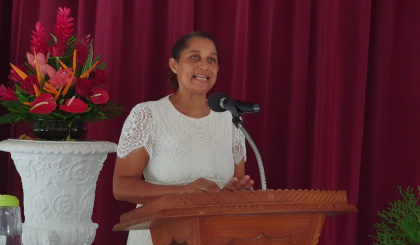