Rajamana opened the floodgates just past the half hour mark from a quickly taken free kick by Gambian defender Modou Jallow allowing the diminutive striker to head smartly past Au Cap goalkeeper Terence Mondon to make it 1-0.

Au Cap had yet recovered when a minute later, Rajamana latched onto countryman Patrick Rasaminana’s pass to outspeed the Au Cap defence and slot the ball home for his brace for a 2-0 score at half-time.

Au Cap had a great chance to cut the arrears in the first minute of the second half when Northern Dynamo’s Aldo Dufresne pulled back Au Cap skipper, Ghanaian Emmanuel Armah and referee Emile Fred pointed to the penalty spot. But Ghanaian Jonas Baffoe stepped up and tried to be too clever with his spot kick which he wasted as the ball bounced back off the crossbar.

Rajamana then bagged his hat-trick in the 48th minute as he raced onto Lucas Panayi’s well-weighted through ball to rifle past goalkeeper Mondon to make it 3-0.

Northern Dynamo gave away a second penalty on the hour mark as Francis Moumou held back Wallus Mondon and referee Fred awarded the undisputed penalty which captain Armah planted into the net to beat goalkeeper Mario Banane for a 1-3 score.

Northern Dynamo and Rajamana then went on the rampage as they tore apart the Au Cap defence with Rajamana scoring his fourth personal goal in the 69th minute for a 4-1 lead and five minutes later, Rajamana made it 5-1 as he finished off substitute Daniel Maillet’s cross.

In the 80th minute, Maillet combined with Rajamana who set him up to make it 6-1 and three minutes later, Panayi slipped a beautiful through ball to the overlapping Dufrene who rounded goalkeeper Mondon to score and make it 7-1.

Northern Dynamo added an eighth goal in the 86th minute from Rajamana’s threaded pass to substitute Harim Evenor who blasted the ball from close range into the roof of the net for a 8-1 score before Rajamana completed his one-man show to grab his sixth personal goal on the stroke of fulltime after Panayi had eluded several defenders to lay the ball on a plate for him to round off their biggest win in the league at 9-1 and add to the misery of Au Cap.

The Northern Dynamo goal scoring hero Rajamana told Sports NATION that he was very happy with his goal haul after a difficult start to the season because of injury.

“This is only my third start in the league and I’m happy with my performance today though it was quite difficult but it’s nice to score so many goals for the first time,” said the Malagasy striker who has eight goals to his tally for the season.

Northern Dynamo manager Nigel Michaud-Payet was also ecstatic for this incredible scoreline and he felt they could have scored more goals.

“We took time to get going but after the break, we played well and could even have reached double figures but overall it is a very good result,” manager Michaud-Payet told Sports NATION.

As for the Au Cap club president Nichol Dogley, he was very disappointed with his team’s showing especially after giving St Michel a run for their money in their previous outing but falling apart against Northern Dynamo in catastrophic manner.

“It is a very bad loss and it is very disappointing especially after doing so well against St Michel, but today we were very poor and we definitely need to bolster our squad,” Dogley said. 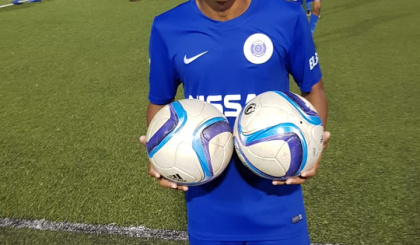