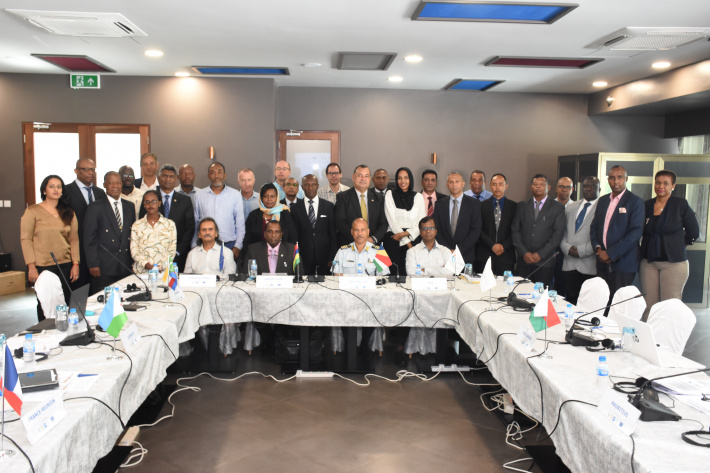 A souvenir photograph after the official opening of the meeting (Photo: Jude Morel)

The Regional Coordination of Operations Centre, one of the two centres that form part of a maritime security architecture for the Western Indian Ocean, under the Maritime Security in Eastern & Southern Africa & Indian Ocean programme, is on course to be fully operational by the end of the year.

The announcement was made yesterday during the 4th Maritime Security in Eastern & Southern Africa & Indian Ocean (Mase) steering committee meeting, organised jointly by the department of home affairs and the Indian Ocean Commission (IOC) in which members of the committee analysed the progress made so far on the programme, the current situation in terms of maritime security and maritime threats in the region as well as the way forward.

In his opening address, Chief of Staff of the Seychelles People’s Defence Forces (SPDF) Michael Rosette noted how ill-prepared the world was against the menace of piracy off the coast of Somalia and the great strides that have been made towards combating the scourge.

“Today, we are proud that the arduous task undertaken by all our countries have culminated into a shared vision and mutual drive to tackle all forms of maritime threats, so as to keep our oceans safe and secure. It is with great pride that Seychelles recognises the achievements of the Mase programme in that regard. The assistance extended (by the European Union) has served to strengthen that capacity of the region and empowered our state to adopt a consolidated approach to maritime security and safety,” Colonel Rosette stated.

Colonel Rosette further noted the need for member countries to work and collaborate together to further combat prevalent maritime threats, including drug trafficking and illegal, unreported and unlicensed (IUU) fishing among other illicit maritime activities.

The Mase programme is funded by the European Union and led by the IOC and based on the notion that cooperation and coordination is the safest and most effective way to improve maritime control and surveillance. Through two regional agreements, it establishes two regional centres, namely, the Regional Maritime Information Fusion Centre (RMIFC) to deepen maritime domain awareness by parties and facilitate the exchange and sharing of maritime information, while the RCOC is dedicated to coordinating operations at sea.

EU representative for Mauritius Arunsingh Ramdenis reiterated the instrumental role of the IOC as a facilitator for the signing of the two agreements and the establishment of the two regional centres. He, on behalf of the EU thanked all partner countries and all involved, for their efforts towards the regionally-owned maritime security architecture.

“The recent Cutlass 19.2 exercise shows that the main international actors are now aware of the potential and capacities of your centres. I would like to commend the countries of the region, for acknowledging the need to share information at a regional level, and undertake joint actions at sea in order to combat piracy,” Mr Ramdenis stated.

Director of the RCOC, Colonel Georges Adeline, affirmed that the RCOC centre will be fully operational by the stated timeframe, having been equipped with the necessary equipment already.

Highlighting the benefits of the centre to Seychelles, Colonel Adeline noted that all member countries are regarded as equal in the maritime security architecture and Seychelles will benefit as much as other countries.

“In the region there are lots of international communities that are already functioning, namely the EU Navfor which has led the combat against piracy, combined joint taskforce (CMS) who are currently combatting illegal drug trafficking, and us RCOC, we are a regional group. When the scourge of piracy emerged, the foreign forces cooperated and worked together to fight the scourge and have managed to control it, but there was not in the region any countries that grouped together to combat illegal maritime activities,” said Colonel Adeline.

“It is good for these countries to group together in the event that forces that are not permanent in the region decide to leave, they can complement the work carried out by the international forces,” Colonel Adeline concluded.