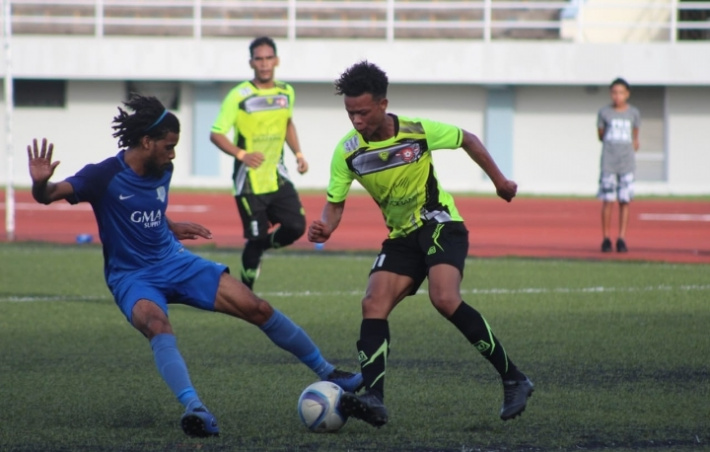 Livakely, the league’s top scorer, bagged a hat-trick against City

SeyPearl Premier League leaders St Michel humiliated struggling Victoria City 11-0 at Stad Linite on Thursday afternoon for the biggest victory in the league as they completed their first round matches at the summit of the standings.

St Michel began in top gear and almost went ahead in the 6th minute when Malagasy Oliver Livakely and Norris Bibi exchanged passes before Bibi’s shot on the turn clipped the City crossbar.

City though should have been awarded a penalty in the 15th minute as Yannick Manou appeared to handle Nelleri Maillet’s corner but referee Nelson Emile turned a blind eye.

Livakely though wasted a clear chance in the 18th minute from Malagasy Hassan Aly’s threaded pass to him and in a one-on-one situation with City goalkeeper Randolph Bijoux, he was denied by a good block by the City custodian to keep St Michel at bay.

The Anse Aux Pins-based team opened the floodgates in the 21st minute somewhat controversially as Maillet was fouled but the official did not blow his whistle and this permitted St Michel to break quickly as Aly slipped a pass to Malagasy Francis who lobbed goalkeeper Bijoux who had rushed off his line for a 1-0 lead.

Two minutes later, City had a great chance to level the score when Eddy Bistoé wriggled his way past some strong tackles to filter a superb pass to Heidy Labrosse who was clean through but the City striker dithered on the ball and was quickly closed down by goalkeeper Jalyl Servina.

The league leaders added a second goal in the 32nd minute from Aly’s spread out pass to Jimmy Bijoux whose near post cross to Francis was blocked by goalkeeper Bijoux but Francis collected the loose ball to roll it to Aly who stabbed the ball into the net to make it 2-0.

Five minutes later, St Michel made it 3-0 after Livakely’s corner fell to Manou who floated the ball to the back post to his skipper Alex Nibourette who chest trapped the ball before rifling a right footer past goalkeeper Bijoux for a 3-0 score at half-time.

St Michel were rampant in the second half and stretched their lead in the 50th minute after Francis won a duel with Dareem Esparon to set up Bibi who eluded a defender to shoot low into the bottom corner for a 4-0 score.

St Michel’s star player Livakely then took centre-stage as he latched onto a long ball in the 55th minute to flash a cross across the City goalmouth which was diverted into his own net by defender James David to make it 5-0.

In the 57th minute, Aly fired a rasping free kick past a static goalkeeper Bijoux into the net to make it 6-0 after David gave away the foul as he brought down Bibi on the edge of the penalty area.

Two minutes later, Livakely showed his class as he dazzled past a couple of defenders to thump the ball into the net from a tight angle for a 7-0 score and another two minutes later (61), the same Livakely pounced on Aly’s through ball to smash it into the bottom corner to make it 8-0. Livakely amazingly bagged his hat-trick in four minutes when he volleyed Aly’s cross for a brilliant goal for a 9-0 advantage in the 63rd minute.

St Michel put the icing on the cake in the 88th minute when they won a penalty after Bistoé was penalised for handling Aly’s stinging shot and Evariste took responsibility of the spot kick and sent goalkeeper Bijoux the wrong way for a crushing 11-0 scoreline which maintains St Michel’s lead at the top of the league where they have opened up a five-point gap over second placed La Passe.

“It was a very easy triumph and it was vital to score as many goals because of the disappointment of last week. Therefore we are very happy with the team for scoring some beautiful goals as well and the result speaks for itself as we were superior to our opponents throughout the match,” St Michel manager Jean-Louis told Sports NATION.

As for City coach Joel Decommarmond, he bemoaned the attitude of his players which resulted in such a demoralising battering.

“My players lack the determination and hunger but are rather not interested and focused as they are irregular at training and it is proving to be a mission impossible to turn our fortune unless the players take things more seriously,” City coach Decommarmond revealed to Sports NATION.