Busy Signal, Kenyatta Hill invite you to get busy this Sunday! | 07 December 2019 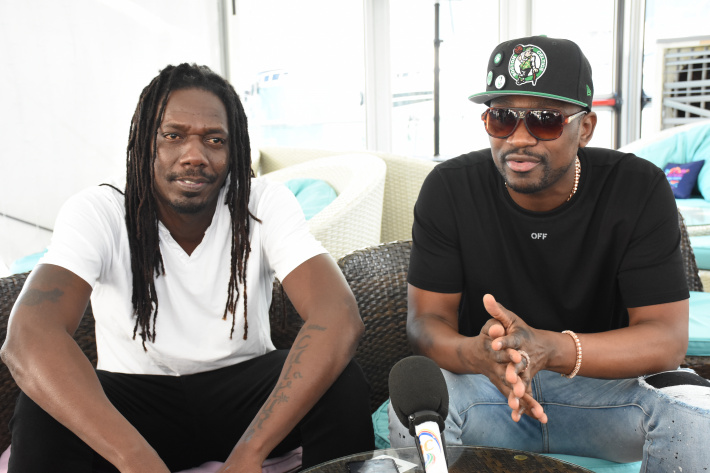 Two famous reggae artists, Busy Signal and Kenyatta Hill, are back on our shores. They will be giving a concert tomorrow at the Mini Stadium as from 8pm.

The two artists met with the press yesterday at the Boardwalk Bar and Grill, Eden Island for a casual chat.

Kenyatta Hill is on his third visit to Seychelles whereas this is Busy Signal’s second visit.

“Just being called back here to perform is a sign of great love and acceptance. We are loving it here and we do feel at home. It is worth coming all the way and we do love the local food here,” said the reggae artists.

What can the fans expect this time? “A mixture of everything! We will play some old but some new songs also. We just want to come and enjoy. Music has no language and with reggae music we try to bring out some messages to the world. Real reggae music is to stand for something real and it brings you to a state of mind where you get to see people and this is powerful,” added Kenyatta Hills and Busy Signal. Before the press conference ended, they both sang two lines of their favourite songs.

The previous times these two artists came to our shores, the fans were not disappointed.

Tickets for tomorrow’s concert at the Mini Stadium cost R250 and are on sale at Kot Do and will also be on sale at the venue at R300.

Kenyatta Hill’s career began the day his father’s ended. Joseph Hill, singer and songwriter for the legendary Jamaican vocal trio Culture, collapsed and died while on a 2006 tour of Europe. To the amazement of promoters, fans and critics alike, Kenyatta stepped on stage and delivered electrifying performances time and again – 19 shows in all – until the tour was complete. This was unheard of in any genre of music at any time.

Kenyatta gave of himself so totally – as his father had for so many years – that the two seemed to become one, the eerily similar voices and the vibes igniting the critics and yielding a new reggae mantra “magic, not tragic!”

Reanno Devon Gordon, better known by his stage name Busy Signal, is a Jamaican dancehall reggae artist. Known as one of the artists leading the contemporary dancehall movement, Busy Signal has been a large part of the scene since 2003. His first hit single ‘Step Out’ was one of the most popular dancehall songs in 2005.

He was nicknamed Busy Signal by his friends because of the fact that he is constantly busy. His hit tracks for 2007/2008 were ‘Nah Go A Jail Again’, ‘Smoke Some High Grade’, ‘Tic Toc’ and the track entitled ‘Unknown Number’ has made tremendous airplay and dancehall reviews especially in the Caribbean and the US.