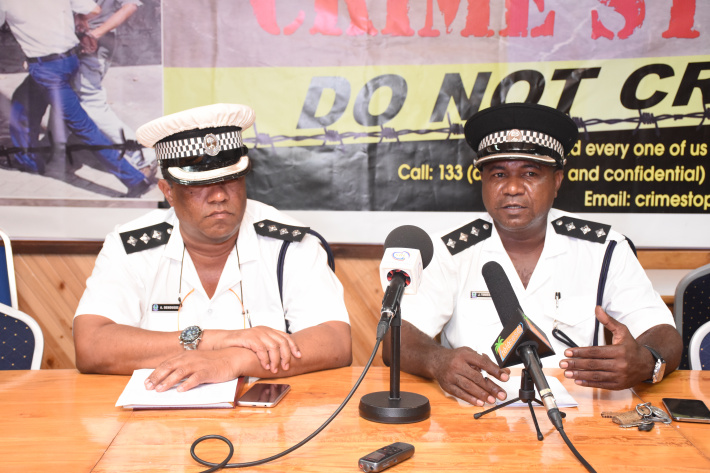 To enhance the level of security across the country during the festive season in relation to public disorder and traffic offences, the Seychelles Police has once again, like in recent years, launched its end-of-year festive operational plan.

This is due to the number of activities being held during the holiday seasons when many people attend functions, thus an increase in consumption of alcohol which could lead to a rise in road and other types of accidents, domestic violence and other crimes in general.

The combined special operational plan for Mahé, Praslin and La Digue which started yesterday and which include the regular police, the traffic police, the Anti-Narcotics Bureau (ANB) among other police units, is expected to create a safe and secure environment, reduce reactive crime, prevent and combat alcohol and drugs crimes, tourism-related crimes, as well as crimes related to noise pollution among others.

Giving details of the special operational plan, police spokesperson, Assistant Superintendent (ASP) Jean Toussaint said during a press conference yesterday morning that the police will be doing their upmost to safeguard law and order through constant patrols, spot checks and search vehicles or others in different locations across the country.

“We want the police presence to be more visible during that period and this will act as a deterrent against offences and crimes to be committed. The police want to ensure a safe and secure festive season for all our citizens and visitors during this period,” ASP Toussaint said.

He urged the public to be more vigilant of their surroundings in regards to protecting their properties and personal belongings while also respecting the police and themselves in public and to be aware of opportunist crime.

As regards to traffic offences, ASP Antoine Denousse said that the police will take tough actions against people involved in traffic offences especially in relation to drink driving. He said the police will set up road blocks for spot checks and searches of vehicles for alcohol or other substances including offensive weapons which could lead to arrest.

ASP Denousse also said that the police would take action against people consuming alcohol in vehicles or public places and also to those committing disorderly conduct in public.

He noted that eight fatal accidents have happened so far this year and urged drivers and pedestrians to use the roads wisely and to respect the road regulations to avoid such fatality.

As a word of advice, ASP Denousse called on party goers to have an alcohol free designated driver to drive them home after their gathering, thus to avoid being caught up in an accident or getting into trouble with the police.

On a final note, ASP Toussaint called on the public to collaborate and work with the police for a safe, calm and accident free festive celebration.