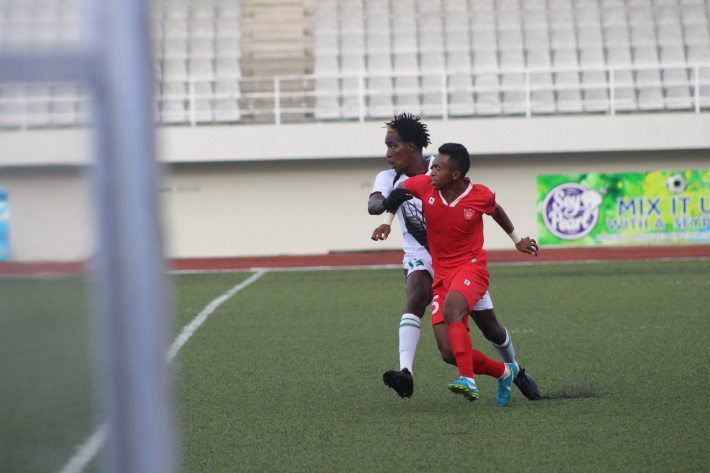 Red Star Defence Forces defeated Revengers 3-1 at Stad Linite on Saturday while on La Digue, Côte d’Or returned to winning ways with a 1-0 victory over La Passe and on Praslin, Foresters maintained their unbeaten run with a 3-2 win against LightStars.

Red Star Defence Forces’ Malagasy striker Tojo netted a hat-trick to inspire his team to a 3-1 triumph over Revengers at Stad Linite on Saturday afternoon in the SeyPearl Premier League.

After a goalless first half, Tojo opened the scoring on the hour mark to make it 1-0 and he scored his brace from the penalty spot in the 87th minute before completing his hat-trick on the stroke of fulltime with a lob over goalkeeper Gino Melanie for a 3-0 lead.

Revengers scored a consolation goal in added time through their Malagasy striker Marthelin for a final 3-1 scoreline as Tojo has now scored 14 goals in the league to lead the goal scoring chart.

Côte d’Or back to winning ways

Malagasy Kassah netted the only goal of the match in the 28th minute to make it 1-0 the final score as La Passe lose ground on league leaders St Michel who now sit at the top of the league standings with 27 points with La Passe second five points adrift.

Mont Fleuri-based Foresters maintained their unbeaten run in the league with a hard fought 3-2 win against LightStars at Stad Amitié on Saturday afternoon.

Foresters’ defender Warren Mellie opened the score for his team for a 1-0 lead but Malagasy Mario Ravo levelled matters for a 1-1 score at half-time.

Leroy Corallie scored in the second half to make it 2-1 and Martin Williams added a third for a 3-1 advantage though Renick Esther cut the deficit with well struck free kick for a 3-2 final scoreline as Foresters moved into third position with 21 points though they still have two games in hand over league leaders St Michel.

St Louis dropped more points as they could only manage to draw 0-0 against Anse Reunion at Stad Linite on Friday evening.