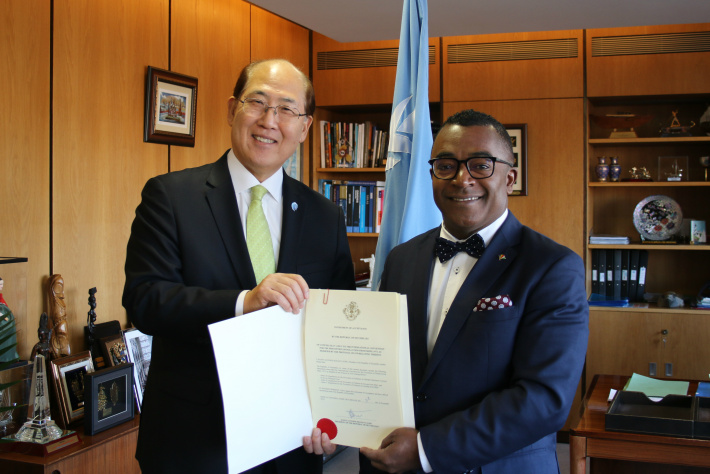 Seychelles has acceded to four Annexes of the International Convention for the Prevention of Pollution from Ships, 1973 as modified by the Protocol of 1978 (MARPOL 73/78).

MARPOL 73/78 is a key Convention of the International Maritime Organisation (IMO) and one of most important instruments for the prevention of marine pollution by ships.

"Accession" is an act where a state seeks to become a party to a treaty already negotiated and signed by other states, usually after it has entered into force. Accession has the same legal effect as ratification. The commonplace procedure is for the state to deposit an ‘Instrument of Accession’ with the designated depositary, which for IMO Conventions, is the secretary general.

Alan Renaud, principal secretary for civil aviation, ports and marine, who headed the Seychelles delegation at the 31st IMO assembly, presented the instruments to IMO secretary general Kitack Lim, at the IMO headquarters in London on November 29, 2019. Present at the ceremony was Terry Romain, principal counsellor and alternate permanent representative to the IMO at the Seychelles High Commission to the Court of St. James’s in London.

MARPOL 73/78, short for marine pollution 1973/78, was developed by the IMO with the objective to preserve the marine environment by completely eliminating pollution by oil and other harmful substances, including air pollutants, and minimising accidental discharges of the same. MARPOL 73/78 has been amended many times over the years, and contains six technical Annexes.

Seychelles originally acceded to MARPOL 73/78, and its mandatory Annexes I and II, on November 28, 1990.

The four Annexes to which Seychelles is now newly acceding are:

● Annex III – Prevention of Pollution by Harmful Substances Carried by Sea in Packaged Form, which determines the requirements for the packing, marking, labelling, documentation, stowage, quantity, exceptions, and notifications of marine pollutants listed in the International Maritime Dangerous Goods Code (IMDG Code) or which meet the criteria established in the Annex;

● Annex IV – Prevention of Pollution by Sewage from Ships, which sets conditions for the discharge of sewage into the sea;

● Annex V – Prevention of Pollution by Garbage from Ships, which specifies the distances from land and manner in which different types of garbage may be disposed; it also imposes a complete ban on disposing all forms of plastics into the sea.

Mr Renaud said: “Like a quilt of diamonds, our archipelago unfurls over a vast stretch of the Indian Ocean with an economy defined by the bounty and natural beauty of the waters it encloses.

“Shipping will always be an indispensable part of our economy, but so too is our natural capital, and we hold it fair and just that shipping operations in our waters be carried out in a manner that keeps them clean and safe.

“The volume of shipping traffic we experience is far heavier than is warranted by trade alone to our region, because our islands sprinkle along the great shipping lanes that connect Africa to the rest of the world.

“If we are ineffectual at implementing globally agreed standards to prevent marine pollution, we risk making our seas a haven for sub-standard shipping. And without the necessary legislation, we cannot even enforce the standards, which is why our next action will be to domesticate the Annexes into Seychelles law, to give power to our new Maritime Safety Authority to deal with bad actors, few we hope they may be.”

Seychelles’ Minister for Tourism, Civil Aviation, Ports & Marine Didier Dogley, added: “Seychelles’ accession to these Annexes proves our commitment, as a responsible flag nation, to reduce pollution from ships – protecting not only our own marine environments, but everyone else’s too. Ocean waters have no passports.

“The beaches of our precious jewel, Aldabra – a Unesco world heritage site – are festooned with the flip flops, fishing gear, and also the plastic bottles of seafarers and shippers plying their trades thousands of miles away; the ocean litter prevents turtles to nest and entangles seabirds.

“Aldabra’s corals are similarly becoming laden with micro plastics, and although the amount which is ingested by marine organisms and crustaceans is unknown, this much we do know: the battle to keep our sparkling islands clean is not one we can win by ourselves alone, instead only in concert and shared community with the world.”

In accordance with IMO regulations, the instruments will become effective for Seychelles on February 29, 2020.