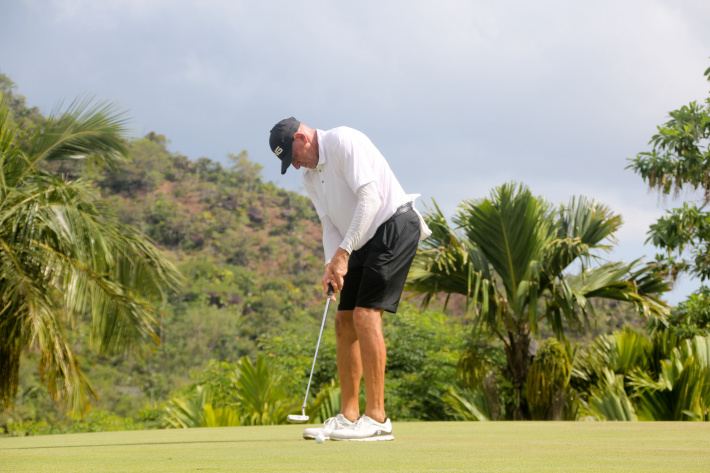 Fowler in his element

Australian Peter Fowler is this year’s winner of the MCB Tour Championship – Seychelles which was held over three days last week at the Constance Lemuria on Praslin after recording a final round of 67. This was the 60-year-old’s seventh Staysure Tour title.

The land of the Coco-de-Mer featured as the second leg of a three-destination competition for the destination’s second participation at the prestigious regional golf competition. The Constance Lemuria boasts a par -70, 18-hole golf course that spans over an area of 5,580 metres.

Fowler started the third day and final round four shots behind the leader, South African James Kingston, he birdied holes 1, 2, 6 and 16 to beat Kingston by one stroke even though he boogied hole 7.

The golfers were blessed with very good weather over all three days unlike the first time the competition took place here last year. However, some golfers struggled with the heat and high humidity; but winner Fowler remained calm throughout the last day of the championship. Fowler was caddied by local golfing talent Jean-Marc Esther who looks to have been enjoying the whole tournament alongside the champion. He won a prize of R10,000 from MCB.

After receiving the wonderful trophy, Fowler had this to say;

“It’s been a fantastic three days of golf. I made lots of birdies this week. I was fortunate to only have one bogey on my card today and that paid off. I played quite conservatively on the par fives towards the end but managed to get the job done. I opened with two birdies and then birdied the sixth and that really settled me down. I played quite well and had a lot of birdie chances but didn’t make them until I got to the 16th, but I kept a lot of bogeys off the card and that was important. The golf ball doesn’t know how old you are. Since I’ve turned 60, I’ve said that I still need to work hard. If you look at Bernhard Langer and the other senior guys who are doing well around the world they continue to work hard on their fitness, which is important for us because our fitness is dropping, but I’m trying to keep mine up there. I’ve proved over the last ten years that your fitness is key to success.”

Kingston signed for a final round of 72, two over par, to claim his third runner-up finish of the year and move into second place on the Staysure Tour Order of Merit. Welshman Phillip Price, who tops the Order of Merit, extended his advantage following his third place finish in this tournament after his one under par round of 69.

The organisers of this year’s tournament were all happy with its outcome. Special mention went to the golf manager of Lemuria Gary Pouponneau and his team, the Seychelles Tourism Board, the sponsors and all the volunteers.

Tourism, Civil Aviation, Ports & Marine Minister Didier Dogley pointed out that such tournament reminds the world that Praslin should not only be known for its Vallée de Mai and nice beaches but also as a golfing destination.

The second leg of a three-destination competition also comprised a ProAm competition won by the ISPC team consisting of professional golfer Philip Golding and amateur Jonathan Paul.The runners-up were team STB (Seychelles Tourism Board) made up of pro Tim Thelen and amateur Eddie Micock. Clark Dennis and Guy Adam completed the medals podium.

The ProAm round (net) played yesterday consisted of 48 teams, each comprising a pro golfer and one Seychelles resident amateur including junior players and female golfers. 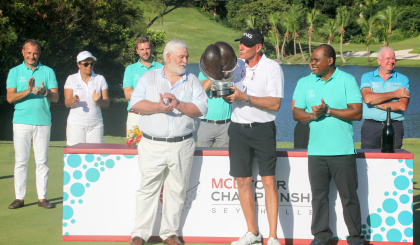