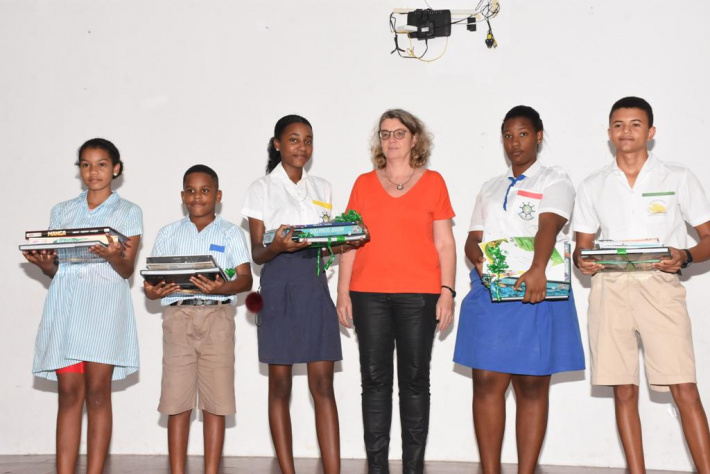 Some of the winners in a souvenir photograph with CEO Dogley (Photo: Louis Toussaint)

The yellow crazy ants, commonly known as YCA, has been a major concern for Seychelles Islands Foundation (SIF) which is why it launched a poster competition earlier this year.

The theme of the competition was ‘Yellow crazy ants; a major threat to Vallée de Mai - Problems and solutions’.

A ceremony was organised on Tuesday at the Roche Caiman community centre to reward the schools and the students who took part in the competition.

She said she hopes that the students who participated in the competition share what they have learned with their community and educate the masses about the destructive impact of invasive species.

“If an invasive species like the yellow crazy ants reaches Aldabra, it will have a big impact on the wildlife there and will cost over 4 billion rupees to eradicate it,” said the CEO.

She ended by thanking everyone who participated in the competition.

In total, fourteen schools took part and they were all rewarded with a certificate during the ceremony.

Adel Allisop, also from Independent School, came out third with Ella Moustache in second position and Anil Lozaique first. Both Ella and Anil are from Beau Vallon secondary school and they were excited about receiving their prizes.

In the secondary category Charmaine Soffola from Plaisance secondary received a special mention, followed by Staelle Rigodon and Shakira Tirant, from Mont Fleuri secondary who came out third and second respectively.

Brandon Lucas from Plaisance secondary was the lucky winner in the secondary category.

The ceremony ended with a performance about the dangers of the yellow crazy ants.