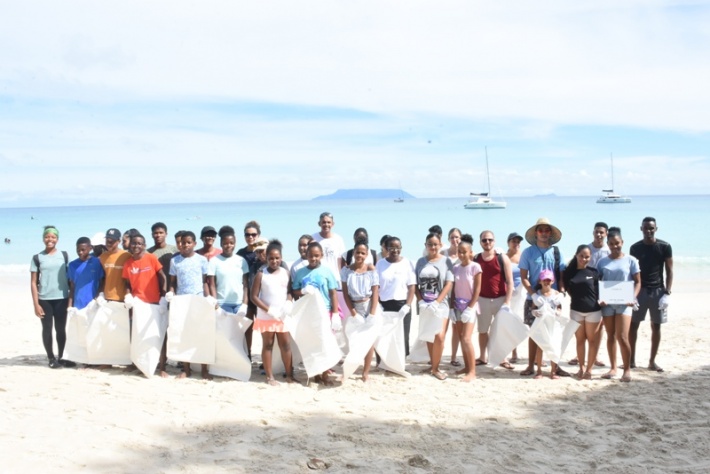 A souvenir photograph of the occasion

Staff from the Ministry of Environment, Energy and Climate Change joined members of the ‘Parley for the Oceans’ group on Saturday morning to clean the Beau Vallon beach, one of the most visited and popular beaches on Mahé.

The clean-up of the beach of litter and marine debris was part or activities to celebrate this year’s World Ocean Day, June 8.

The World Ocean day provides an opportunity for people to celebrate, honour, help protect and conserve the ocean which connects us all.

As the saying goes, a healthy world ocean is critical for our survival. It was in this context that the clean-up of the beach was organised.

Present for the clean-up exercise were the Minister for Environment, Energy and Climate Change, Wallace Cosgrow; the principal secretary for Environment, Alain De Commarmond; the coordinator for ‘Parley for the Oceans’, Alvania Lawen; and other representatives from the Parley, Ocean Project, Eco-Warriors, Ministry of Environment and students from Beau Vallon secondary school.

The activity took place in the area between La Plage restaurant and the rocky boulders towards Mare Anglaise where the participants picked up plastic items and other forms of litter such as bottle caps and pieces of glass.

Ms Lawen said that such clean-up exercise was also happening in other places in the world where by Parley also launched its new AIR (Avoid Intercept Reduce) campaign for the protection of the oceans against plastic and other forms or rubbish.

At the AIR launch at Beau Vallon, the participants wrote their respective messages for the oceans on the AIR campaign White board which will be sent to Parley for worldwide propagation along with those from other countries.

This year’s theme is ‘Gender and the Ocean’ an opportunity to explore the gender dimension of humankind’s relationship with the ocean.

After the clean-up exercise, Ms Lawen said she was very satisfied with the way it was undertaken and she described the Beau Vallon beach as a very clean beach at the moment due to the mall amount of rubbish collected.

She said that cigarette butts and small clear plastic bags catering for small items were the most collected especially in areas further down towards Mare Anglaise where it is less frequented by tourists and the public.

Parley for the Ocean’s group is the space where creators, thinkers and leaders come together to raise awareness for the beauty and fragility of our oceans and collaborate on projects that can end their destruction. It also addresses major threats towards our ocean, the most important ecosystem of our planet. Parley for the Ocean was founded on the belief in the power of creative collaboration to influence change. Its founder, German Cyril Gutsch, based in the United States of America, knew that by tapping into the imagination, he could get people to care about what is happening to our oceans. Alvania Lawen has been appointed as the Parley coordinator since May this year and the Beau Vallon beach clean-up was the first activity organised.

Parley for the Oceans is a non-profitable body which started in 2012 to fight water pollution and eradicate plastic. It founder Mr Gutsch has taken the fashion industry by storm, collaborating with brands like Adidas and Stella McCartney to produce sneakers, fitness apparel, and accessories made from Parley Ocean Plastic, a new fiber derived from plastic fishing nets and other debris recovered from oceans and waterways across the globe.

But it’s not just clothing – Parley has partnered with American Express (to produce the first credit card made with Ocean Plastic) and Anheuser Busch (to reduce plastic use at music festivals it sponsors).

Mr Gutsch’s goal is to expand into other business sectors and begin cleaning up debris in every country with a coastline by 2024.

This year, Gutsch will launch the Parley Institute for Material Science, based in Boston and New York, where researchers can analyse the effects of today’s toxic materials, and search for alternatives. 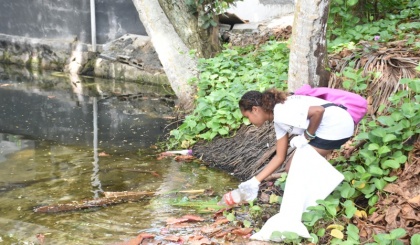 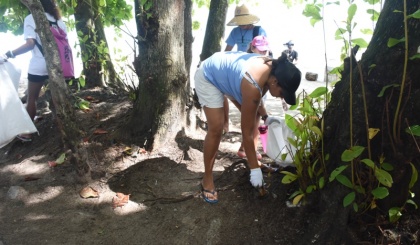