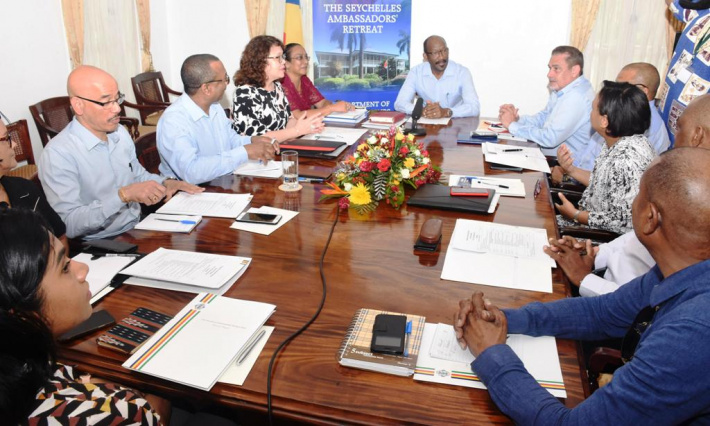 Vice-President Meriton addressing the diplomats at the launch of their meeting yesterday (Photo: Louis Toussaint)

Seychelles ambassadors and high commissioners, representing the country overseas, met yesterday morning at the headquarters of the department of foreign affairs for their annual retreat to review Seychelles’ diplomatic policy strategy for 2019 and also to discuss the best way forward for 2020.

Thus, the objective of the 2019 retreat is to get the ambassadors and high commissioners to engage in discussion on their functions, achievements, challenges, future plans as well as networking with relevant stakeholders during the course of their stay while also taking the opportunity to define priorities and strategic objectives to further enhance Seychelles’ foreign policy.

Among issues to discuss is the way to reap benefit for Seychelles in the coming years as faced with the fact that we have been considered a high income country, thus does not qualify by donor countries to receive financial aid among others.

Seychelles has 11 embassies functioning across countries in different parts of the world.

In his address, Vice-President Meriton thanked the ambassadors and high commissioners for their hard work and devotion in strengthening Seychelles’ diplomatic relationship abroad.

He expressed his gratitude for their roles played, at times in difficult circumstances, to advocate and to defend our national interest, especially in regards to challenges on sustainable development, while keeping the people to people diplomacy at the very centre of our foreign policy working strategy.

“We are aware that continued progress is achieved through strategic coordination, partnership and collaboration. We are committed to working as a team, with your good selves and relevant stakeholders to ensure that the necessary actions and attention are accorded to our country’s priorities,” Vice-President Meriton said.

“Together you’ve spearheaded the international campaign for the blue economy, leading to the recognition of Seychelles as an innovator in ocean governance by introducing the debt for nature swap and a special marine initiative,” Vice-President Meriton said, noting that all the efforts put by Seychelles on the international arena has led us to become one of the leading countries in the field of counter-piracy in the Indian Ocean while also a reliable partner to international actors and a significant voice on marine safety and security.

In regards to Seychelles being placed as a high income country by the World Bank while also being placed high on the human development index by UNDP, which reduces our ability to get financial aid, Vice-President Meriton urged the ambassadors and the high commissioners, while those results are well appreciated, to continue to support Seychelles’ effort to get the world to formulate and develop a multi-dimension wellbeing index that will fairly and equitably reflect the successes that we have achieved while recognising the challenges we face as a small island nation.

In support, the dean of the Seychelles ambassadors, Ambassador Radegonde, said that they will work to find a strategic narrative that will allow Seychelles to continue to receive aid from the international community, thus to convince them “not to penalise us for the success we have made”.

On a lighter note, Ambassador Radegonde said that Seychelles through its diplomatic engagement is still in discussion with the French government on the possibility of French President Emmanuel Macron visiting Seychelles next year during the 250th anniversary of the arrival of the first settlers in Seychelles.