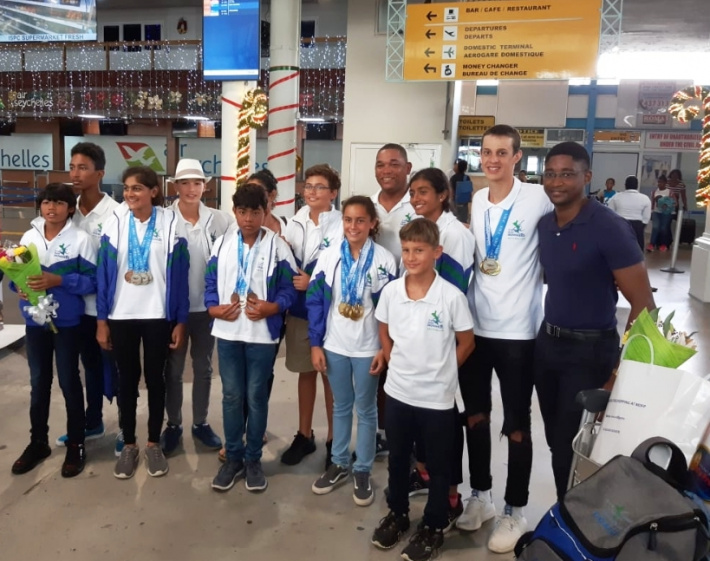 The Mahé Skimmers swimmers upon their return home yesterday

Thirty medals is the total count of the Mahé Skimmers Sports Club at the recently held Mauritius Summer National Championships which took place from December 12-15 at the Pavilion Swimming Pool in Quatre Bornes.

Mahé Skimmers were being represented by 10 swimmers who were competing under the guidance of experienced coach Barnsley Albert.

The superstar of the team at the tournament was Alexander Payet who won eight gold and two silver medals.

Her two silver medals were in 50m butterfly and 50m breaststroke.

In the 200m breaststroke, Mason’s time of 2 minutes 58.90 seconds (2:58.90) is believed to be a new national record, but the time remains to be homologated by the Seychelles Swimming Association (SSA).

Seychelles was also being represented at the championship by 20 swimmers of the Aquafins Swimming Club but we could not get hold of their results by the time of going to press.

Coach Barnsley Albert’s reaction: “Firstly, the competition was a very high level and our swimmers have really fought to overcome the Mauritians as the level of swimming in Mauritius is really high. In general, I am very happy with my swimmers’ performances as I got 100 percent personal best times. My vision and strategy is to try and overcome Mauritius by the next Indian Ocean Island Games in 2023.”