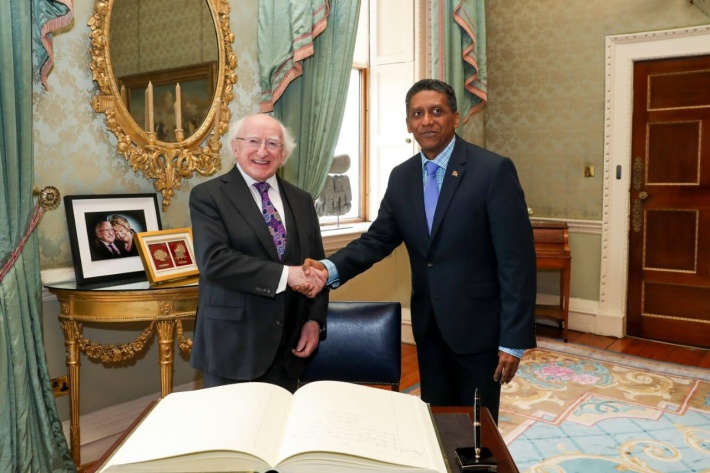 President Faure among the discussion panel

is a collective world effort’

Ocean and marine protection is a collective world effort and everyone has their role to play, President Danny Faure has reminded delegates at the Our Ocean Wealth Summit and SeaFest, Ireland’s largest maritime festival, in Cork, Ireland.

"Safeguarding the oceans and marine life from climate change, acidification, overfishing, deep-sea mining, plastic pollution and other threats is a global responsibility. Much of the world’s food and half of the oxygen we breathe come from ocean waters. The ocean is also the largest active carbon sink on earth, absorbing more than 25% of the carbon dioxide in the atmosphere. Allowing their continued abuse is unacceptable," said President Faure.

In Ireland at the invitation of the Irish government to SeaFest, President Faure delivered his keynote address on Saturday at the Wild Atlantic theatre, located at the Cork city quay. Delegates consisted of representatives from other small island states like the Pacific, the Caribbean and Africa, Irish ministers and locals.

The SeaFest coincided with World Oceans Day and government representatives and ambassadors from 31 countries from the Pacific, Caribbean and African coasts who are facing significant challenges from climate change gathered in Cork at the weekend.

President Faure relayed to the audience actions being taken by Seychelles such as delivering the Blue Economy roadmap, and having committed 30% of Seychelles' waters to marine protection by the end of next year. However, he alerted that more is required.

"With the right support and partners, we can do more to sustainably harness the vast ocean resources that surround us to grow our economies, and secure and improve the welfare of our people,” continued President Faure.

This point was supported through presentations and a discussion panel organised in line with marine and ocean protection. President Faure and the Irish Deputy Prime Minister and Minister for Foreign Affairs, Tánaiste Simon Coveney, were panel members.

Tánaiste Coveney spoke of the need to better engage with oceans which make up 70% of the planet and getting better at core activities such as dumping waste, managing fish stock and protecting natural resources. President Faure responded to questions such as how Seychelles managed to successfully develop the 'blue bond' model and what level of education is needed to obtain public buy in on ocean and marine protection.

The SeaFest was attended by a number of major international figures, including former US Secretary of State John Kerry and former president Mary Robinson.

Prior to the panel discussions President Faure and his delegation were given a tour of Cork city quay by the Irish Minister for Agriculture, Food and the Marine, Michael Creed. This included visits on several ships including one which is part of the Irish naval force. Several projects denoting innovative ways Ireland is trying to harness the ocean’s wealth were also on show.

Earlier in the day, President Faure also attended a working lunch hosted by the Irish Deputy Prime Minister and Minister for Foreign Affairs, Tánaiste Simon Coveney, where opportunities for greater collaboration were discussed alongside exchanges of best practices in maritime management and tackling climate change. 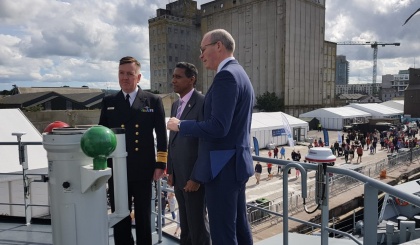