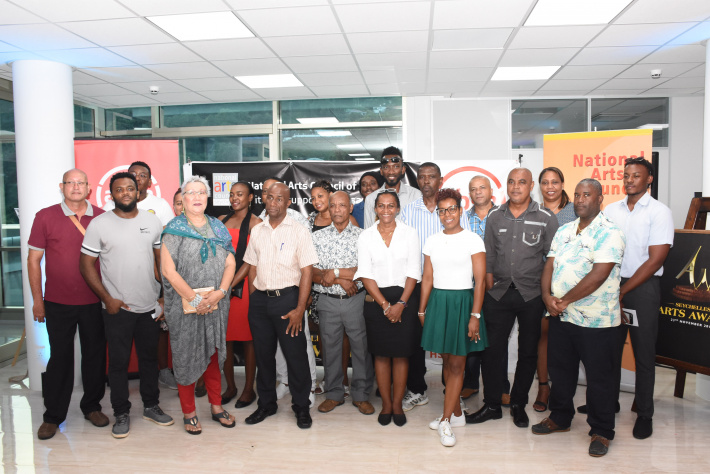 Some of the nominees from the second Seychelles Arts Awards

2019 was a fruitful year for the arts and culture as some of our local artists managed to take part in various international assignments, gaining much needed exposure in the process.

After having submitted their work to the exhibition organisers, the two celebrated artists were selected for the exhibition, as well as the 2nd Overseas International Imported Commodity Expo and Qingtian International Exhibitions, held from November 14-20, 2019 in Qingtian, China.

The pair’s participation was sponsored by the National Arts Culture Fund (NACF), within the department of culture.

Considering that 2019 is the second consecutive year in which Seychellois artists have been selected to showcase their art which is representative of the Seychellois culture and nation, culture principal secretary Cecile Kalebi noted that their participation in this prestigious event is a step in the right direction for the art sector and having the support of the culture department is vital to maintaining the relationship with the organisers.

Seychellois artist George Camille is the first Seychellois to have exhibited his art at the Beijing International Art Biennale (BIAB) in China.

This year’s exhibition, the eighth since its inception, was staged in the impressive National Art Museum of China and ran from August 30 to September 20, 2019 and saw the involvement of 113 countries, 595 artists and 640 pieces of artwork – 446 overseas works and 194 domestic ones.

Mr Camille showcased artwork entitled ‘Searching’ depicting the journey in life that mankind all embark on from birth to death through the use of recycled copper wire, shapes and forms bent and attached to canvas as well as embossed on copper sheets.

Numerous artists who have performed outstandingly well in their respective art forms and who have gone to great lengths to advance the development and uphold the Seychellois cultural values and traditions were duly recognised and rewarded during the second Seychelles Art Awards, held at the International Conference Centre (ICCS) on November 23.

Comprising 19 categories covering different art forms practiced by local artists, the awards were divided into 3 main sections, 12 of which were open competitive awards as per criteria set for judging, five lifetime achievement Jury Awards and a second jury decided section honouring individuals who are not necessarily artists but who have contributed significantly in art and culture development.

The 34th edition of Festival Kreol, a multi-day event celebrating the Seychellois culture, tradition and rich heritage saw numerous changes, including changes in venue for the much-frequented Sunday family-fiesta known as Dimans Kreol Borlanmer and the route for the cultural parade, Laserenad, which this time made its way to Roche Caiman from Stad Popiler.

While many of the events drew in large crowds, the Vilaz Kreol set up at Roche Caiman, also the location for the much-loved Dimans Kreol Borlanmer this time, failed to attract the large volume of people anticipated by organising entity the Creative Industries and National Events Agency (CINEA).

The opportunity stemmed from the first edition of the Seychelles Fashion Week 2018, coordinated by founder of Telly’s modelling agency Terry Carolla and for the first time, Seychelles participated and showcased the work of Seychellois fashion designer Johanna Didon as well as craftworks of other local entrepreneurs.

Asides from showcasing a collection designed and assembled by Ms Didon, the models walked the runway for other African designers. The event was also an opportunity to market local craftworks at the boutiques within the African Souk, one of the new activities added to the fashion extravaganza.

Their participation was sponsored through the National Arts and Culture Fund (NACF) under the department of culture.

With the participation of 26 designers from across the globe – 15 more than in the first edition held last year – and a whopping 50 Seychellois models walking the catwalk with 10 international models, the second Seychelles Fashion Week has been described by its chief executive, Terry Carolla, as “a huge success”.

The second Seychelles Fashion Week kicked off on November 25 with various workshops, boot-camps and a business forum, and culminated with two fashion shows held on November 29 and 30 at the Eden Bleu Hotel.

Additionally, the fashion shows were filmed and will be broadcast by international media outlets, World Fashion TV and Fashion TV Africa.

Byenal Sesel 2020, an art exhibition under the theme ‘Lost and Found’, was officially launched by the chairman of the National Arts Council (NAC) Gabriel Essack in August.

The biennale, to be held mostly at the Eden Arts Space, Eden Plaza on April 25, 2020 will feature the works and creations of local artists in any medium and will be judged by a panel of international judges chaired by winner of the last edition George Camille.

For the first time, some of the biennial exhibits will also be put on show in other locations on Mahé, Praslin and La Digue with the aim of entertaining, enlightening, annoying, bemusing and astonishing the audience. Martin Kennedy is the curator for the biennale.

In July, Seychelles hosted the week-long 18th Pan African Society for Musical Arts Education (PASMAE), grouping together key players in music education from top universities across the African continent and other countries to plan and map out new paradigms that will chart a new course in music and art practices.

Some 80 delegates attended the conference/workshop where presenters illustrated practices as well as new developments in music and art education that will benefit music educators, performers and many others.

Seychellois artists brought up to speed with intellectual property workshops

Seychellois artists who stand to benefit from intellectual property (IP) rights and laws were brought up to speed on the latest developments through various workshops and initiatives coordinated by the Ministry of Finance, Trade, Investment and Economic Planning.

The aim was to raise awareness on IP, share Wipo and Aripo mandates on IP, share Wipo’s technical cooperation tools for development, present findings of the 2017 review of the Implementation of Intellectual Property Development Plan, consult with various IP stakeholders in how best to implement IP laws and to establish a status quo of intellectual property in Seychelles and the way forward.

Accompanied by teachers and parents, 18 students of the National Conservatoire of Performing Arts (NACF) attended a 10-day dance workshop at Pineapple Studios, London in August, giving the students an opportunity to gain more dance experience as well as to have the opportunity to meet with other dancers. The workshop also served as an opportunity for the teachers to broaden their knowledge of new dance techniques and skills and get also accustomed to the latest dance trends.