According to the World Economic Outlook published by the International Monetary Fund in October 2019, the global economy is expected to grow by 3.0% in 2019, at its lowest level since the period 2008-2009 and a reduced pace compared to a rate of 3.6% in 2018.

Against this backdrop, inflationary risks have remained weak. According to the IMF, “core inflation has slid further below target across advanced economies and below historical averages in many emerging market and developing economies”. This is with the exception of economies that experienced “large currency depreciations”, the effect of which has filtered through to domestic prices. The other exceptions were countries with acute shortages of essential goods such as Venezuela and Zimbabwe.

In view of Seychelles’ heavy reliance on the rest of the world, a slowdown in global output can adversely impact on the performance of the domestic economy, characterised as small and open and susceptible to external shocks. Nonetheless, during 2019, economic sentiment has remained broadly unchanged compared to the previous year. The main challenges expressed by the business community continued to include high operating costs, challenges to recruit local workers as well as stiff competition from imported substitutes. This is in addition to a call for improved ease of doing business. From a consumer perspective, although indicators such as a high demand for credit by individuals and households and a growth in imports of consumer goods suggest a high level of consumer spending, the main concern expressed has been “high cost of living”.

Based on latest forecasts, the Seychelles economy is expected to achieve another positive annual growth in output in 2019. Real GDP is projected to grow by 3.9% in 2019, slightly lower than the rate of 4.1% recorded in 2018. Such outcome is anticipated to reflect a positive performance of the services sector, particularly the value-added contributions from the tourism and communication sectors.

Latest available statistics suggest a further growth in the performance of the tourism sector in 2019 compared to 2018 and this is in terms of both the number of visitors to the country as well and the level of income generated. As at December 15, 2019, a total of 359,165 visitors have disembarked in Seychelles, which is a growth of 5.6 per cent compared to the cumulative 340,039 visitors recorded for the same period in 2018.

By continent, Europe remained the key market after supplying a total of 247,324 visitors or equivalent to 69 per cent of the aggregate figure. In terms of the main European countries, the top three markets were Germany followed by France and United Kingdom & Northern Ireland which respectively contributed 19 percent, 12 percent and 8.0 percent of the aggregate number of visitors for the afore-mentioned period. To note, the contributions from the European continent grew by 10 percent whilst that from Asia, a key emerging market, fell by 4.1 percent, with the latter primarily due to a decline of 35 percent in the number of Chinese tourists and drop of 22 percent in visitors originating from the Indian Sub-Continent.

In terms of the direct foreign exchange earnings generated by the tourism sector, statistics based on inflows into the Seychelles economy for the first nine month of the year 2019 aggregated to US $433 million which is a growth of 6.0 per cent compared to the same period last year. However, taking into consideration provisional data for October and November, tourism earnings would grow at a reduced annual rate of less than 6.0 percent compared to 2018.

Notwithstanding the above, statistics reported by authorised dealers show a growth in inflows of foreign exchange into the domestic economy. As at the end of November 2019, the aggregate amount of inflows converted into domestic currency has increased by 2.9 percent compared to November 2018 whilst over the same period, the total value of foreign currency deposits held by residents in domestic banks amounted to US $559 million compared to US $487 million in November 2018. As regards to the total demand for foreign exchange that were met by authorised dealers following conversion from the rupee, these have declined by 7.5 percent.

In terms of exchange rate movements, this continued to reflect changes in domestic demand and supply conditions as well as fluctuations in international cross rates, particularly the euro/US dollar rate. Such development was consistent with the adopted floating regime. Statistics as at end of November 2019 show that on average, the local currency has traded at R14.03 against the US dollar which is a slight depreciation of the rupee by 13 cents or 0.9 per cent compared to the average of R13.90 for the same period of 2018. From January to November 2019, the rupee has traded at an average of R15.76 against the euro, which was an appreciation of the domestic currency by 75 cents or 4.5 per cent compared to R16.51 in 2018, an outcome that mirrored how the euro was performing internationally.

1 Authorised dealers are licensed to but and sell foreign exchanges i.e. banks and bureau de change

Due to the strong correlation between exchange rate movements and domestic prices, the overall stability in the external value of the rupee has contributed to an easing of inflationary conditions. According to the Consumer Price Index (CPI) published by National Bureau of Statistics (NBS), the overall increase in consumer prices of goods and services has moderated during the year with measures of inflation showing a lower level compared to the previous year. In November 2019, prices were on average 1.7% higher than in the same month of the previous year, which is a marked reduction in inflation compared to a rate of 3.7% recorded in November 2018. In addition to the stable domestic currency, the low inflationary environment has been supported by relatively weak international commodity prices, including that of fuel.

Against the above backdrop, and in consideration that the increase in consumer prices is projected to remain modest in the short to medium term, the Central Bank of Seychelles (CBS) revised its monetary policy from a tight to a loose stance effective October 2019. In its press communiqué issued on September 23, 2019, the Bank stated that its decision was “to support domestic economic activity, given the expectation of modest inflationary pressures in the short to medium term”. Consistently, its Monetary Policy Rate (MPR) – introduced in January 2019 as part of revisions undertaken to move to an interest rate-based monetary policy framework and away from monetary targeting – was reduced from 5.5% to 5.0%. The MPR serves as the key policy rate that signals the monetary policy stance and is complemented by an interest rate corridor that is adjusted according to changes in the MPR. With the revision in MPR in the fourth quarter of 2019, the Standing Deposit Facility and the Standing Credit Facility, which form the floor and ceiling of the interest rate corridor were both reduced by 50 basis points to 2.0% and 8.0%, respectively. The reduction in the MPR is expected to translate into an overall fall in interest rates in the economy.

Chart 03: Average Lending Rates (in per cent per annum)

In terms of demand for credit, this remained strong during 2019. At the end of November 2019, the total stock of outstanding credit disbursed to the private sector has grown by R1,671 million or 19 percent on a year-on-year basis. The majority of these loans were to the categories “tourism facilities”, “mortgages” and “private individuals & households” with the latter accounting for 21 percent of total outstanding credit disbursed to the private sector.

Given Seychelles’ high reliance on imports, an increase in the demand for loans imply higher goods as well as services demanded from the rest of the world where the latter tend to be in the form of overseas travel. Provisional forecasted balance of payments statistics for 2019 show an increase in the current account deficit, implying increased net international payments by Seychelles compared to the previous year.

Despite such development, a further improvement in the country’s ability to withstand external shocks has been experienced in 2019. This is denoted by a growth in international reserves from US $549 million at the end of 2018 to US $586 million on December 23, 2019. Over that same period, the increase in net international reserves was from US $408 million to US $433 million.

As regards to the situation in the labour market, the quarterly unemployment statistics published by NBS show a national unemployment rate of 3.5% for the second quarter of 2019.

The unemployment rate stood at 4.2% for the male population and 2.8% for female whilst the overall labour participation rate was 69%. The number of employed persons stood at 53,226 which was an increase of 7.8 per cent compared to the second quarter of 2018. Over the same period, earnings of employees have grown by 15 percent to an average of R14,429 per month.

Skills miss-match and consequently, the inability of businesses to fill all vacancies from the existing pool of local labour, continued to be one of the labour-market concerns expressed during 2019. Taking into consideration of this fact, there were further evidence of growing participation in the economy by foreign workers during the year. Such increased reliance on foreign labour – arguably critical in some sectors of the economy – also implies a growth in outflows of foreign exchange transferred abroad as workers remittances to the rest of the world.

In terms of fiscal policy, the government remained committed to its strategy of reducing public debt to below 50 per cent of GDP by 2021 and therefore, targets a primary surplus of 2.5 percent of GDP. Based on latest projection, total public debt is expected to end the year 2019 at 61 percent of GDP, of which 29 percent accounts for external debt.

In terms of outlook, WEO expects global activity to pick up in 2020 with growth in real GDP projected at 3.4%. Such outcome would primarily be supported by an improved performance in “a number of emerging markets in Latin America, the Middle East, and emerging and developing Europe that are under macroeconomic strain”. In view that the Seychelles economy is not anticipated to undergo major structural change in the short-term, an improved global environment should have a positive impact on the economy in view that it is expected to remain dependent on the rest of the world. Domestic economic activity will continue to be driven by activity in the tourism sector, underpinned by the performance of the services sector which is expected to remain positive. For the year 2020, real GDP is forecasted to grow by 3.5%.

Contributed by the Central Bank of Seychelles 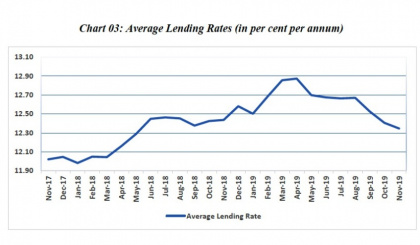 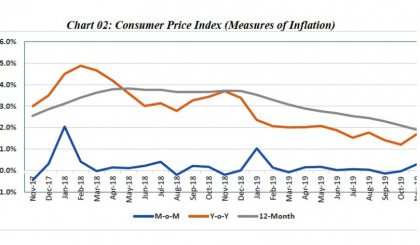 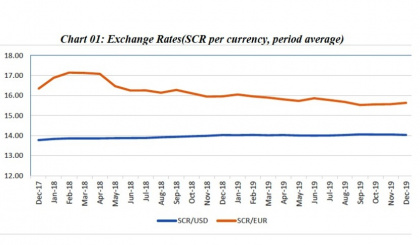