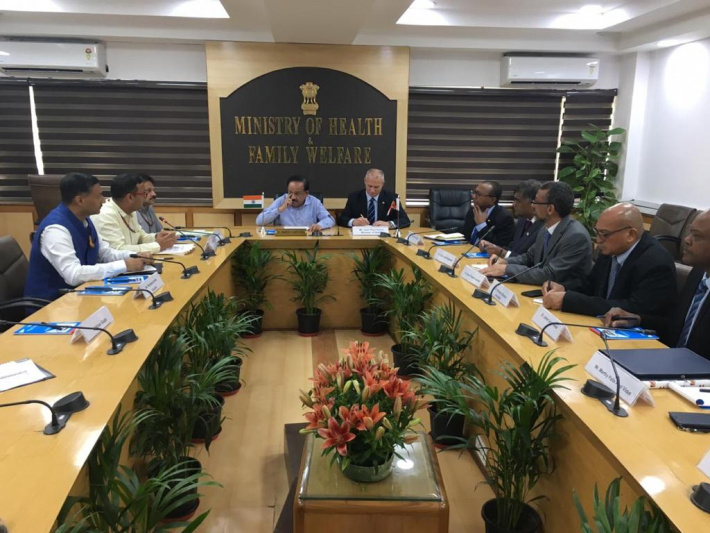 Minister Adam on overseas mission in India and China

The year 2019 was a tremendously busy year for health diplomacy and the politics of health while the release of two publications – the Health Sector Performance Report for 2018 and the National Health Accounts Report for 2016-2017 – jolted the management of the Ministry of Health, compelling it to pose fundamental questions about current public health policies.

Pushing health diplomacy to the hilt

Health Minister Jean-Paul Adam was ubiquitous throughout 2019 as he relentlessly sought to advocate, both nationally and internationally, for the health sector and its workforce, amid a mighty torrent of challenges but also a sea of great opportunities.

The year 2019 was a tremendously busy year for health diplomacy and the politics of health. On several occasions, the minister ventured out to the National Assembly, of his own accord or the National Assembly called upon him, to explicate the soundness of the ministry’s strategies to address non-communicable diseases such as cancers, and diabetes and communicable diseases such as HIV, Aids, and Hepatitis C, among others.

Internationally, Minister Adam led Team Seychelles to the 72nd World Health Assembly in Geneva, to the Seventh Meeting of Health Ministers of Small Islands Developing States and to the second Africa Health Forum (both of the latter two meetings took place in Cabo Verde).

The minister also negotiated for the health sector in countries as far apart as Sweden, Morocco, China and India. These negotiations focussed on a bevy of matters from collaboration in the treatment of Alzheimer’s disease to training and exchange of medical doctors and other health personnel and overseas treatment.

With the Czech Republic, the minister signed, for the very first time, a bilateral agreement for the health sector. In Ethiopia, he was one of the conveners of a ground breaking African meeting on pooled procurement.

The relay baton for prevention and early detection passes naturally from the Ministry of Health to the non-governmental organisations, almost. In 2019, organisations like Cancer Concern, Seychelles Patients Association, Lions Club, HIV and Aids Support Organisation, Soroptimist, Doctors for Doctors, Stroke Foundation and many others, consistently, joined hands with the Ministry of Health in a concerted effort to promote health and well-being wherever people live, work and play.

“The combined effect of their contributions reaches very far,” says the principal secretary of the ministry, Dr Bernard Valentin. “They are all invaluable partners!”

With the support of WHO and others, the Ministry of Health launched the National Strategic Plan for HIV/Aids, and its companion monitoring and evaluation framework in May. In the presence of the Head of State, Danny Faure, the Minister for Health, Jean-Paul Adam invited everyone to recommit to a Seychelles with no new HIV cases, where everyone knows their status, where there is no stigma or discrimination, and where there is HIV treatment available to all.

The outbreak of the measles epidemic in several countries and the growing reluctance of ill-advised parents worldwide to have their children take child-protecting vaccines spurred the Public Health Authority to recommend a national vaccination programme for the entire population not adequately covered by the vaccine. The vaccination programme started with health workers. Subsequently it will include others.

On other fronts, the Public Health Authority, with the support of WHO, updated and adopted the third generation of integrated disease surveillance and response guidelines (the first country in Africa to do so) and managed to advocate successfully for a horde of new measures in tobacco control, alcohol control and food control.

The jewel in the crown of the National Institute of Health and Social Studies, this year, was the graduation of 21 nurses at Bachelor’s level and 12 nurses at Masters’ Level in collaboration with the Chamberlain College of Nursing. This adds to the batch of graduates in Biomedical Sciences, Nursing Sciences, Environmental Health Sciences and Social Work that the school produced for this year. The NIHSS acquired full accreditation from the Seychelles Qualification Authority towards the end of 2019.

Matching Seychelles with the best in the business

The Health Sector Performance Report for 2018 published in the first quarter of 2019, showed marginal but disquieting increases in infant mortality, in mother to child transmission of HIV, in maternal mortality and in life expectancy for that year. The National Health Accounts Report for 2016-2017, which the ministry also published in 2019, showed major increases in out-of-pocket expenses for health, compared to previous years.

Statisticians at the Ministry of Health were quick to explain that the ministry cannot draw too many inferences from the statistics of one year alone and that the sector needs to watch carefully whether trends appear.

“Now more than ever before we need to address patient safety and quality of care,” directed the health minister on several occasions.

The need for actions to improve the patient experience was compelling.

New dynamism reigns and a flurry of innovative activity now prevails in primary health care all over the country.

In October, the ministry summoned all senior health leaders in the country for a high-level dialogue on quality of care. It was evident from the discussions that the country remained a trailblazer, far ahead of the pack, in the African region. However, it still falls short when measured against the more advanced countries.

“This calls for a paradigm shift in the way the local health sector matches itself with the rest of the world,” agreed most senior health officials.

“We now need to set standards used by the developed countries and measure ourselves against these standards. That’s the only way we can improve!”

The determination to do precisely that is now evident.

“The prescription fee introduced in June 2019 is a very, very good thing,” insisted one patient on social media. “Most people now have enough cash in their hands to make the contribution of R25 for their own health care.”

However, most people however are not paying. The list of exemptions includes children less than eighteen years, students above eighteen who can show that they are in full time education, persons over eighteen years and persons with a chronic condition and pregnant women. The ministry forecasts that 90% of all prescriptions will benefit from the exemptions and estimates that the money government will collect because of the fee will be around R1.5 million. In his budget address for 2019, the Minister for Finance, Trade, Investment and Economic Planning had already indicated that the main purpose of the fee was not to raise revenue for the state coffers. Rather, it was to raise awareness on the continually rising health care costs and the fact that all and sundry should, more and more, take greater care for their own health.

The population takes greater responsibility for self-care by participating in prevention and by willingly coming forward for early detection and treatment.

The work-place wellbeing programme of the Ministry of Health, which falls within the ambit of the never old “my health, my responsibility” campaign aims to keep the workforce healthy and engaged with the health sector.

Already several organisations such as the Seychelles Civil Aviation Authority, Seychelles Public Transport Corporation and Seychelles Trading Company are on it.

Moving on to physical challenges, infrastructure development was the ‘Achilles heel’ of the Health Care Agency as it wrestled with the complicated structures and processes of the Procurement Oversight Unit and National Tender Board to get its projects off the ground.

In the end, the Female Medical Ward got a much-awaited renovation, English River Health Centre acquired a new extension and a major facelift and the Intensive Care Unit got a new roof and ceiling. Most of the other infrastructure development projects of the Health Care Agency stalled, much to the frustration of the management.

However, the Agency was undeterred as it continued to improve the patient experience with new interventions and processes. It adopted the Seychelles Package of Essential Non-Communicable Diseases Intervention (SEY-PEN) with a launch at Anse Aux Pins and Beau Vallon. SEY-PEN refocuses and strengthens the capacity of the Health Care Agency to respond effectively to the challenge of NCDs.

The Health Care Agency also ramped up efforts to address adolescent sexual and reproductive health issues following a review of such programmes.

Come the end of 2019, the chief executive of the Health Care Agency, Dr Danny Louange, finally put his signature on the contract to begin the installation of the long-overdue electronic health information system.

“This will completely change the health care paradigm,” he said.

Seychelles is certainly paving the way for the health sector to begin comparing itself with only the very best in the business.

“We are now a high income country,” said a renowned local healthcare leader, “we need to behave like one!” 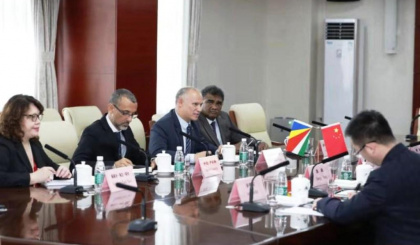