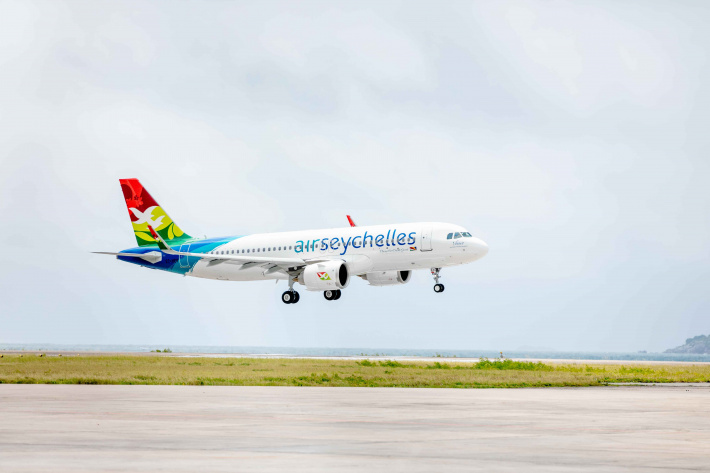 Greater visibility for Seychelles on the international and local scenes

Accentuating its marketing efforts, across the globe, the Seychelles Tourism Board (STB) through its offices and representation worldwide, strove to place Seychelles in the limelight on the international and local scenes. This is in line with the tourism board’s mandate to market the country.

Maintaining its presence at the various international tourism rendez-vous, the STB alongside its trade partners capitalised on their presence at several important trade fairs, to increase visibility for the island destination. The paradise archipelago made the headlines during the first quarter as it was present in Germany for the (InternationaleTourismus-Börse Berlin) - ITB 2019, for a five-day event in the German Capital.

As part of the major events, the destination was also represented in Dubai in April for the Arabian Travel Market-ATM, in Paris’ Expo Porte de Versailles in October for the IFTM Top Resa and finally, the Seychelles islands sparkled through its strong delegation at the 40th edition of the World Travel Market (WTM) London in November at ExCel in London.

As part of its marketing efforts, STB increased visibility for Seychelles also through its participation in various trade fairs and other STB organised roadshows, including the Matka trade show in the Nordic Region; the ‘Le Salon de Vacances’ in the Belgian capital Brussels; theFerien-Messe Wien- Austria; the Bit-International Tourism Exchange (Bit) in Italy; the Spotlight Africa Workshop held in Lusaka, Zambia and the Antor Travel Carnival 2019 on the eastern side of the Pearl River estuary in southern China. Other successful marketing missions were conducted in various corners of the world.

As part of increasing Seychelles’ visibility worldwide, numerous projects were undertaken by the STB through its various offices. A memorable event remains the beauty of the destination, which has been celebrated in a book titled ‘Seychelles travel book – A Young Ornithologist’s Travel Journal’ written by an 11-year-old aspiring Italian ornithologist from Acquapendente, Francesco Barberini, in his third book. The book came out on December 17, 2018 just a few months after a trip organised for the young author by the STB office in Italy. The book was presented to the Italian press and public on January 25 and 26, 2019 in Rome at the prestigious Sala Margana, in the heart of the ancient city near Piazza Venezia during which a creole buffet was also offered to the guests for the occasion. At the request of the author, part of the book’s profits will be donated to the birdlife conservation projects on Denisand Cousine islands in the Seychelles.

Making the destination known and enticing more visitors to enjoy the destination is the aim behind the collaboration between the STB and the Miss Reunion Committee. Seychelles was this year’s first choice made by the organising committee to host the official photoshoot of the Miss Reunion competition in preparation of the candidates for their Grand finale, which was held in August.

Aside from the 12 beauty icons from Reunion, the delegation saw the presence of Miss Réunion 2018, Morgane Soucramanien, also crowned third Princess at the Miss France 2018. The delegation was composed of 25 people including Antenne Réunion television crew – official broadcaster for Miss Reunion, photographers of Miss Réunion, make-up artists and designers, headed by the President of Miss Réunion committee, Aziz Patel and the director for the Miss Réunion pageant, Amida Hussein. The STB representative in Reunion, Bernadette Honore, who collaborated with the Miss Reunion committee to make the project a success, was also present on the flight.

Seychelles was bestowed with high honours as the destination was represented at the Tourism Panel at the Destination Wedding Planners (DWP) Congress from March 27 to 29, 2019, held in Dubai’s iconic five-star hotel and luxury resort, Atlantis the Palm. The Seychelles delegation at the DWP event comprised STB’s chief executive Sherin Francis and STB representative in Dubai, Ahmed Fathallah.

The STB chief executive, who was present at the event as a destination speaker, was represented on the Tourism Panel, which was moderated by Conde Nast Traveller Editor-in-Chief in UAE Rhea Saran. The panel also comprised Carlotta Ferrari, director at the Destination Florence Convention and Visitors Bureau; Srisuda Wanapinyosak, Deputy Governor for the Tourism Authority in Thailand and Assistant Vice-President for Dubai Tourism, Steen Jakobsen.

The discussions focused on the role of tourism boards in promoting destination weddings, collaboration with local suppliers and partners as well as the enhancement of the wedding industry in every destination. During her intervention, Mrs Francis reflected on the tourism board’s standpoint of the destination and its marketing in relations to Seychelles as a wedding and honeymoon destination. Presenting the archipelago as an ideal location to create perfect memories for occasions like weddings, honeymoons, anniversaries or impromptu romantic breaks.

Remaining in the spotlight, the beauty of Seychelles is once again at the centre of a media buzz as India’s distinguished Sabyasachi Mukherjee publicised photos of the recent photoshoot conducted in the exotic destination for his first-ever destination wedding collection.

The project initiated by the prestigious magazine Condé Nast Traveller, India for their April issue cover photoshoot, was executed in partnership with the STB.

Seychelles appeared grandiose in an enchanting white wedding setup featuring Miss World 2017, Manushi Chhillar, her handsome groom and the bride’s tribe all dressed and styled by Sabyasachi. The photoshoot was conducted on gorgeous untouched beaches of the luxurious Four Seasons Resort Seychelles at Private Resort of Desroches Island, collaborating alongside STB for the event.

Seychelles crowns itself as an ideal wedding destination with its captivating beaches and sumptuous natural beauty providing breathtaking venue options for celebrations of all special occasions including luxurious destination wedding that would evoke all kinds of Instagram goals similar to this photoshoot.

The destination, not only provided a perfect backdrop to the auspicious event but it was also an opportunity for local talent to be exposed to the international fashion scene.

Initiating new business opportunities and ensuring that current partners and collaborators are trained and well informed is another area the STB has strengthened its efforts this year. The Seychelles multi-coloured flag was flown high in various countries around the world as high continuous roadshows and training events were organised on the various markets including the regions such as Northern and Southern America, Scandinavia, on the Asian Market and in the Middle East.

The STB has seized the opportunity to engage with the significant trade partners on the different markets to evaluate the performance of the destination and establish future collaborative plans with the partners.

It is furthermore in the aim of maintaining its relationships with its collaborating partners that the STB renewed its joint marketing agreement with various airline partners including Air Seychelles, Emirates Airlines and British Airways.

In an attempt to provide the best for the industry, the STB through its digital marketing team instigated the first ‘Digital Fair’ for tourism stakeholders. The fair, which was held on Tuesday March 26, 2019 at Eden Bleu on Mahé and Thursday March 28, 2019 at Pirogue Restaurant & Bar on Praslin aimed at creating a platform for local service providers to interact with their clients. The first digital marketing fair was an opportunity given to the public, especially tourism service providers to meet various exhibitors in a central location to discuss the available digital services and experience new digital trends available on the local market.

In February this year, Kenya Airways introduced additional flights to its services to Seychelles. The airline, which was operating five times per week from Kenya’s capital city Nairobi to the island destination, started operating on a daily basis linking Kenya and Seychelles – making Seychelles more accessible to the outside world as the African carrier, branded the Pride of Africa, follows the launch of its non-stop flight from Nairobi and New York in October 2018.

Closer to home, the destination witnessed the acquisition of the New Airbus A320neo by national carrier Air Seychelles in August 2019. The aircraft, named ‘Veuve’ after the endangered bird commonly known as the Seychelles Paradise Flycatcher, is a symbol of hope and prosperity for the Seychelles. On Monday August 12, 2019, the Air Seychelles’ brand new Airbus A320neo aircraft operated its official flight between Seychelles and the capital of Gauteng, Johannesburg, opening once again the doors to our destination.

Fourteen years after its last flight to Mahé, Air Mauritius (MK), landed back at the Seychelles International Airport on Tuesday 2, July 2019. The airline returned for a twice-weekly flight between the two neighbouring countries and connecting Seychelles to other parts of the world making connectivity easier for potential holidaymakers.

The blue, white and red colours of the Air France Airbus A330-200 was welcomed by ceremonial canon-water at Seychelles International Airport, a few minutes before 6am on October 30, 2019, after a 23-year absence. Air France was previously operated through its subsidiary, JOON, and is now flying its national colours once more.

The return of Air France creates a direct link between Seychelles and France, a significant market for the country. The island paradise is popular in the French market for its tropical environment and familiar French language, which is one of the country’s official languages. As a leading member of the Skyteam Alliance group and having operated flights to 195 destinations, Air France will significantly contribute to the Seychelles tourism industry.

Shining through the podiums, the paradise destination has received several recognitions this year. The destination was the proud recipient of the ‘Favourite Beach Island Destination’ Award at the 32nd Edition of the Conde Nast Traveller Readers’ Choice Awards, in a ceremony organised at the JW Marriott Marquis Hotel in Dubai on Wednesday February 27, 2019.

It was once again crowned as ‘The Most Beautiful Island’ in the world after walking away with the title at the GQ Travel Award, a ceremony that took place in March at the Metropol Hotel, in Moscow Russia. The GQ Travel Awards Ceremony recognises the leading companies, hotels and destinations from the elite travel industry. The winners in the 17 different categories including Seychelles were chosen by GQ readers who voted online on the magazine’s website.

In May, it was in Madrid that Seychelles made the headlines as Grandvoyage.com travel agency delivered their awards to the best tourist destinations of 2019, which featured Seychelles nominated as best honeymoon destination.

In July, Seychelles was rated in the top spot in this category by Travel + Leisure. Seychelles was named ‘Top Island Destination in Africa & the Middle East’.  The destination’s nomination results from the annual survey conducted by Travel + Leisure, which allows readers of the New York-based travel magazine to rate their travel experiences around the globe. Readers get to share their opinions on top hotels, islands, cities, airlines, cruise lines, spas, among others. The best islands by region are rated on a number of characteristics including the destination’s natural attractions, beaches, activities & sights, restaurants, food, people & friendliness and value. The destination’s romantic appeal also features as an optional criterion. For each characteristic, respondents are asked to give a rating based on a five-point scale of excellence. 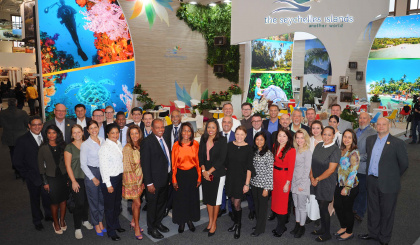 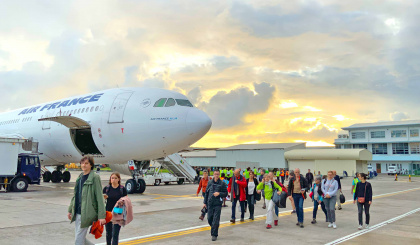 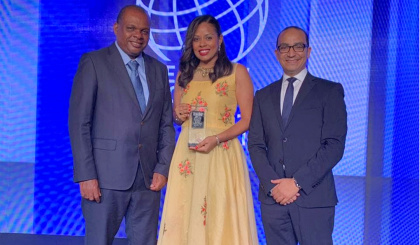 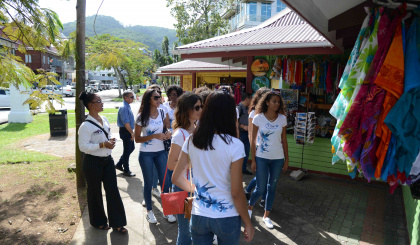 Miss Reunion contestants in Seychelles for their photo shoot 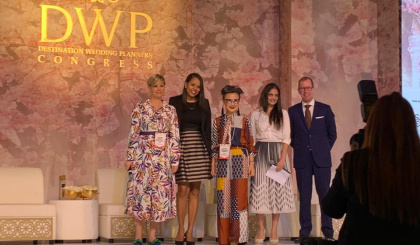 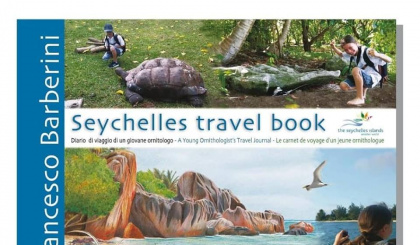 The beauty of the destination has been celebrated in a book titled ‘Seychelles travel book – A Young Ornithologist’s Travel Journal’ written by an 11-year-old aspiring Italian ornithologist from Acquapendente, Francesco Barberini 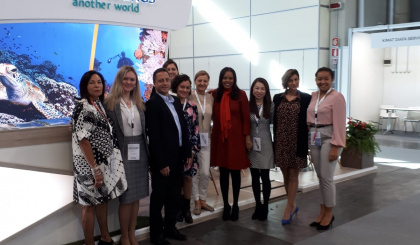