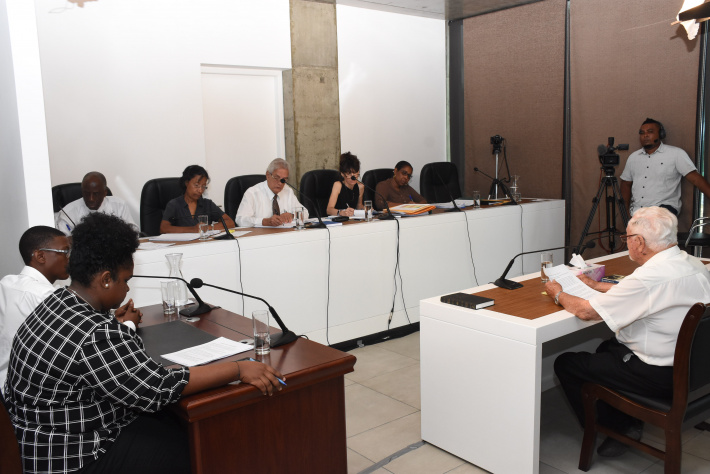 The Commission during one of its hearing sessions

On August 9, 2019 the Truth, Reconciliation and National Unity Commission (TRNUC) started its mandate to investigate cases related to numerous alleged human rights violations committed during the 1977 coup and the following years in which Seychelles was a one-party state.

The aim of setting up the commission is to bring closure to this past episode, through forgiveness and amnesty for the perpetrators. This allows people with grievances linked to the June 5, 1977 coup d’etat and other subsequent events to present their cases before the commission in a bid to seek redress to events that happened to them, members of their families and friends over the past 40 years under the leadership of former President France Albert Rene.

The events were linked to killings, disappearances, imprisonment, forced exile and land acquisitions among other forms of victimisation that happened during and after the coup in the one party state.

Seven commissioners were sworn in to investigate these past events and five members – Australian chairperson Gabrielle McIntyre, vice-chairperson Michael Green, Dr Marie-Thérèse Purvis, Jacques Koui Gbilimou and Mauritian Pierre Rosario Domingue took their oath of allegiance before President Danny Faure at State House on May 9, 2019. It was followed on June 27, 2019 with the swearing in before the president of the two other members – Bishop James Wong Yin Song and Marie-May Léon.

It is to be noted that the National Assembly on December 11 approved the TRNUC Amendment Bill 2019 to replace Mauritian Pierre Rosario Domingue with a Seychellois rather than with another foreigner thus maintaining the seven members on the commission.

Prior to starting the hearing on August 9, the commission, through chairperson McIntyre, was presented with 10 classified files containing 315 classified grievance forms from the different complainants that were in the possession of the Committee on Truth, Reconciliation and National Unity of the National Assembly led by its chairperson and also leader of the opposition Wavel Ramkalawan. The files’ presentation took place during a symbolic ceremony held at the National Assembly on August 9, 2019.

Broadcasting live on Seychelles Broadcasting Corporation (SBC) radio and television from the start of the first session on September 9, 2019, the commission has heard fifty-one (51) cases among which featured nine (9) repeated cases as some cases continued in the following months including that same for some witnesses and suspects. There were seventy-six (76) witnesses and twelve (12) suspects who gave their testimonies and replied to allegations towards them. The last four witnesses were heard on November 26, 2019 with two cases held behind closed doors and the other two live via Skype.

Among the cases featured two key witnesses, former President James Michel and former minister Dr Maxime Ferrari, who had close links with the organisation of the coup and running of the one party state among other coup participants.

Dr Maxime Ferrari, as a coup participant and an ex-minister in the one party state, was the first person to appear before the commission as a witness in its first session at the National House, to provide the commission with evidence in the shooting of Davidson Chang-Him on June 5, 1977, and circumstances surrounding the coup.

Dr Ferrari declared his “genuine and profound regret” at having been at the source of much pain for other Seychellois. He was also questioned about the National Youth Service (NYS), the militia and its functions and roles as well as his personal involvement in land acquisition during his position as the Minister for Lands and Development.

Dr Ferrari noted that he was not part of masterminding the coup and that the topic of the one party state was never on the table until it was introduced eighteen months after the coup.

“I am the first person, directly involved with the coup, to have spoken about my involvement publicly and to have written on paper, for all to read, my account of what happened on that fateful day and during the years that followed,” he said, noting that it was the introduction of the one-party state that brought all this suffering to Seychelles.

On the shooting of Mr Chang Him, Dr Ferrari said that though he was present that day at the Central Police station, he did not see who shot Mr Chang Him other than hearing the shot being fired. He claimed he was in a room together with the leader of the coup France Albert Rene and high ranking police officer James Pillay.

Dr Maxime Ferrari said that he only knew that Mr Chang Him had been shot through a voice that had shouted “here D’Offay (Philippe) had shot Chang Him”, a voice, which until today, he does not know to whom it belongs.

Former President James Michel was among key witnesses to appear before the commission on events he knew surrounding the coup d’etat of 1977. Mr Michel, who is in Abu Dhabi due to personal commitments, said in his testimony via video link that “the coup was necessary to bring about fundamental changes in the country at a time when there was no social justice, where the majority of land was owned by some 50 privileged land owners while the majority of the population was living in abject poverty, the class system was still evident because the coalition government was not bringing the necessary changes. I am proud of my involvement in the process”.

Mr Michel said that he was not involved in any incident or a witness at first hand of any incident at the Police Mobile Unit (PMU) on the night of the coup as he, accompanied by a driver, was parked at the then The People’s printing house situated next to the cemetery at Mont Fleuri, waiting to be called to the PMU which was situated a short distance away (at the former Police Forensic building) when he heard gun shots being fired. He noted that he had a Walkie Talkie with him and his role was to report his observations directly to the leadership, namely former President France Albert Rene and Dr Maxime Ferrari, both of whom were at the latter’s residence at Val Riche.

“At no point did I have a gun on that night. Pictures showing me with a gun were taken later as I explain in my book ‘Distant Horizons’ which was published in 2010 and is in public domain. In fact I explain in great length everything I know and my involvement in the coup,” Mr Michel said.

On his knowledge on the death of Davidson Chang Him, Mr Michel explained that he was not present at the incident and was not privy to the circumstances surrounding his demise and he also was not even aware of any search mounted to find him earlier during the day but he was subsequently informed when he returned to the headquarters at the Central Police Station that Mr Chang Him, whom he knew affectionately as ‘Son’, had been killed at the Central Police Station.

Mr Michel said the death of Davidson Chang Him, Berard Jeannie as well as all the other lives lost were unfortunate and regrettable and they should not have happened and that he was deeply saddened by all the deaths.

With regard to alleged disappearances of persons, Mr Michel told the commission that he has never participated in any such actions and it was never discussed with him.

Mr Michel said he has no excuse to make to the people of Seychelles with regards to events that happened during and after the coup because the changes that happened were necessary but he regretted those events that have hurt and aggrieved some people. Mr Michel has said he is ready to come before the commission again if necessary.

The TRNUC was temporarily based at the Bel Air Complex, behind ‘Hot Bread’ bakery situated at the junction of the St Louis – Bel Air road before it was moved to its new premises at Ile Persévérance.

Apart from the shooting of Davidson Chang Him on the afternoon of June 5, 1977 at the Central Police Station other pertinent cases before the commission were the killing of police officer Berard Jeannie in the early hours of the coup on June 5, 19977 at the Police Mobile Unit, the disappearance of Hassan Ibrahim (Hassanali) who went missing on August 13, 1977 at St Louis, the death of Simon Desnousse and South African bomb expert Mike Asher on October 19, 1982 which the state had alleged they were killed in a subsequent explosion at Anse Forbans after they had intended to plant a bomb and it exploded in their car thus killing them both, the disappearance of soldier Andrew Pouponeau who went missing on August 18, 1982, the death of Michael Hoffman and Sony Elizabeth that occurred on July 21, 1983 at Sans Souci, soldier Wilset Camille who died under the army supervision on September 1, 1985 and the assassination of Gerard Hoareau in London on November 1985 and the disappearance of Gilbert Morgan way before the coup, imprisonment, land acquisitions among other forms of atrocities and victimisations.

Another person who appeared a few times before the commission was former high ranking officer, Robert Esnesta who gave testimonies in relation to human rights abuse at the Grand police prison and the role of the army in the one party state.

The commission is urging persons with information related to the cases before the commission to come forward and provide true evidence.

Though open to the public, few have attended the sessions apart from family members affiliated with the cases and the complainants and witnesses themselves.

According to Mrs McIntyre, the Commission is satisfied with the way its first inquiry session proceeded under its mandate. The most pertinent issue for the Commission is the fact that through its proceedings, people have the opportunity to be heard and to express their grievances. The one concern that the Commission has is the use of social media to undermine the integrity of the Commission's work and to humiliate and criticise people coming before the Commission.

She further said that the Commission urges all persons to recognise that the process of the Commission is about reconciliation and nation building and to support its objectives and exercise respectful restraint when using social media.

As per its mandate, the Commission is not a court to judge and pass sentences but a reconciliation body to seek the truth so that victims can put behind them events in the past that have hurt them thus allowing them to move forward.