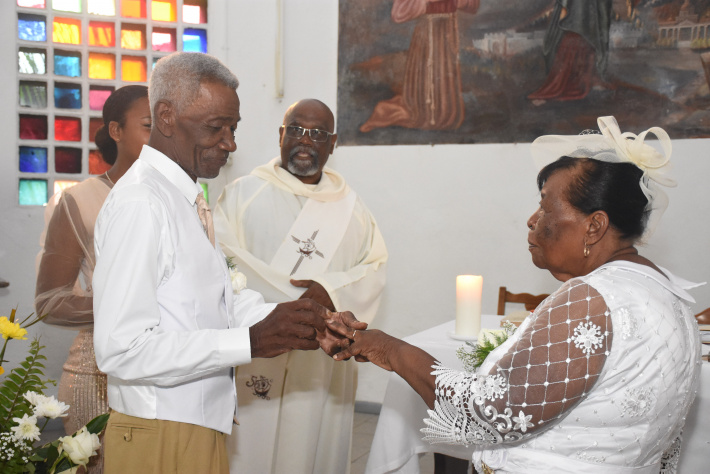 As another year reaches its end Seychelles NATION takes a look back at the different initiatives and continued effort undertaken throughout the year by the Ministry of Family Affairs, the Church and concerned non-governmental organisations to continue to uphold good social values and life skills among members of our families, different groups namely couples and young people with the aim of fostering healthy relationships and good living values so as to help them become good and compassionate citizens in society.

During 2019 a couple celebrated its Diamond Wedding Anniversary while over half a dozen other couples celebrated their Golden Wedding jubilee, a sign that families built on the foundation of true love, strong spiritual guidance are still thriving in our society and should be used as role models.

Marie-Antoinette and Augustin Samedi of Ma Joie celebrated their Diamond Wedding jubilee on November 30 following their original ceremony in 1959 when both of them were aged only 23 years.

In spite of various difficulties and all sorts of challenges that befell them, all of the couples I spoke to highlighted that true love for one another, compassion, understanding, making God part of their life and giving Him a place in their homes has helped them overcome the challenges that every two persons of differing backgrounds and way of living face when they commit and engage themselves to spend the rest of their lives living together.

“Married life has not been easy as both of us are different. We argue often but we ensure we make peace before going to sleep and we talk a lot and always try to find an understanding and compromise on an issue. It is important to decide together on matters concerning the family. Never decide without discussing it thoroughly and mutually agreeing,” Mrs Samedi points out.

She notes that at first it is not easy but you get use to it. She says the biggest problem in marriage nowadays is that there is no or little dialogue and communication and each wants to have his or her own way.

“Married life is about sharing everything and being committed to ensuring each other’s happiness and joy,” she highlights, pointing out that the Seychellois way of life has changed so drastically over the years that we tend to have lost all the good living values that made us the people and families we used to be.

Flocie and Michel Boniface who were married on June 22, 1969 this year celebrated their Golden Wedding Jubilee surrounded by their eight children, grandchildren, family members and friends.

Mr Boniface, now retired, devoted his time and energy to different actions and movements in the Catholic Church. A former police officer, he was only 23 and his beloved Flocie only 18 when they tied the knot for life.

“Age has not much to do with it even though you have to be mature and responsible but for a marriage to be successful in the first place you yourself have to believe in it. Since very young, my dream was to get married and have my own family and I firmly believe that marriage is for life where children are raised in a strong protective setting by their two parents. I grew up dreaming about and preparing for my future,” notes Mr Boniface, who has always been a person who let himself be guided and led by God. He notes that all human beings need a form of spiritual guidance which they can derive from different religious or spiritual teachings and beliefs which are available in large numbers in the country nowadays.

“This is something very important if we decide to and want to live a good, well organised life where good values are the norms and where the sense of responsibility and compassion for others are inculcated in the children starting at a very young age. In the family the parents should have good principles and both parents should be committed and fully engaged in the upbringing of the children,” Mr Boniface points out.

For her part Mrs Boniface, a former teacher turned housewife soon after she married, also firmly believes that good communication is key to a good and happy relationship in married and family life.

“It is important that people talk and continue to talk about everything like how they are going to organise their life,” she stresses.

“Our married life was not always rosy and the road we travelled on was not paved with roses but had its fair share of bumps and ups and downs. In all relationships you have two different people from two different families with different upbringing trying to adapt to each other’s ways, habits, manners, social skills and many other aspects. But my husband tried to understand and support me and we support each other which is very important when children start to come,” says Julita Agathine.

Julita and Michel Agathine were married on October 26, 1969 and this year they also celebrated their Golden Wedding, a celebration hosted entirely by their four grownup children. Like all longtime married couples, Mrs Agathine firmly believes that a strong spiritual foundation regardless of your belief is essential to serve as the basis and guidance for a good life full of love, compassion, sensitivity, tolerance of each other and the ability to seek each other’s happiness.

“My husband has always been a serious and great family man and his family is his priority. He is so attentive and caring and he would always help me with the children,” Mrs Agathine recounts.

She explains that her husband was the one who always did the shopping and the cooking.

Today aged 75 years, Mrs Agathine says her husband’s health is not too good and she is the one taking great care of him.

But what has made the couple so steadfast in their relationship?

“Our strong spirituality, a fundamental and essential aspect in our family life and the basis on which we raised our children. This is something which is sadly absent and missing in many families nowadays. It is important that a family does things together, collaborates, cooperates and shares in family chores and activities, joy as well as pain,” she says.

“For couples married or not who are struggling to keep your relationships and families together, don’t give up but seek the support and blessing of God or the creator and any other force that you firmly believe in to help you improve your life because as an individual you will never be able to change another person but only God or any other divine and spiritual force can help you improve your situation. Remember that you once felt something for each other and that bonded you together so if that bond is still there, see what the other problems pulling you down are and seek advice from the wiser and try to act in a mature manner handling things wisely.

“As much as possible stick to your vows and unmarried couples seek spiritual guidance to formalise your situation,” Mrs Agathine stresses.

Initiatives carried out by the Ministry of Family Affairs

2019 has been a very busy one for the Ministry of Family Affairs which has continued to strive to be more active and visible through its public activities during which it has reached out to many families through its psychosocial support services in the homes and at community level.

The different agencies falling under its umbrella have also stepped up their effort to ensure effective and successful outputs to the ministry’s Strategic Plan (2018 to 2022).

“But the main challenges have remained a lack of human and financial resources and also where resources are available, being able to attract the right candidates committed to social work challenges to fill in available vacant posts,” Minister Mitcy Larue says.

“In 2020 the Ministry of Family Affairs will continue to provide current services and will seek innovative ways to serve the Seychellois public. It will undertake further outreach programmes in its effort to educate the general public on current social development issues and what is being done to redress and mitigate social ills affecting our nation,” the minister adds.

During 2020 the ministry will also remain focused on staff development with the support of international partners and will review existing policies and legislation for amendments to better address emerging and changing needs in the social landscape.

During 2019 the ministry also recorded some remarkable achievements in its drive to fight violence in the homes. In August the cabinet of ministers approved for the enactment of the Domestic Violence Bill and this was followed by the gazetting of the piece of legislation. Local stakeholders involved in the fight against gender violence also followed training supported and led by the US State Department.

A report on the Economic Cost of Domestic Violence was launched in June by the Commonwealth Secretary General Patricia Scotland while here for Independence Day celebrations.

Meanwhile work is ongoing to produce a strategic policy guidance documentation including: revision of the population policy and implementation plan of action, development of a National Gender Plan of Action based on the National Gender Policy.

In collaboration with partners namely the National Bureau of Statistics, a national Multidimensional Poverty Indicators document is being finalised. Furthermore a Social Impact Assessment Indicators and Guideline is in final stages of development.

Working to fight against the abuse of the elderly and to develop standards by which to regulate provision of services for the elderly are some of the critical outputs since a Council for the Elderly came into being in December 2018.

On April 28 a new movement bringing together women and mothers in the diocese aimed at empowering them to better take care of their social and spiritual life called ‘Regard de Jésus sur la femme seychelloise’ was launched.

“The movement has enabled the women to enhance their family life. A few groups have been created around Mahé and La Digue,” Bishop Denis Wiehe of the Catholic Diocese says.

Meanwhile Caritas Seychelles has also done remarkable work this year. It has reactivated all its parish groups and they are attending to the needy and vulnerable. They have provided clothes and certain household items to victims of house fires.

In May the Association for the promotion of Solid and Humane Families (APSHF) organised a conference and mass for the family on the occasion of the Family Day on May 15. This was in collaboration with the Ministry of Family Affairs.

Paster Lannwit celebrated its 4th anniversary in June. Its night mission for the vulnerable and homeless on the street every week-end is ongoing.

Pastoral Zanfan and Kids for Christ hosted a Diocesan gathering for their young members on June 2 at Anse Royale. Bishop Wiehe presided a mass for them and this was followed by a fun afternoon of activities and thanksgiving prayers.

Foi et Lumière (service for the disabled) hosted a conference for their members and families in August, to share friendship, prayers and to celebrate life.

On October 27 for Cancer Month, La Digue parish organised a mass for cancer patients and their families.

Apostolat de la Mer movement which provides support for seamen and their families, celebrated their day at the end of September.

On December 1, Aids Day, the Perseverance Parish organised a mass and activities to educate people on HIV/Aids.

Les Li Viv movement (which provides services for young mothers and unborn children) organised a gathering on December 22 for children and their parents who have benefitted from their services.

The Centre d’Accueil de La Rosière (CAR) has provided day care and rehabilitation services for drugs and alcohol addicts throughout the year. CAR organised a lunch for addicts and the homeless on Christmas Day.

SIFCO has been doing a number of programmes to promote social values.

It is important to note that the presence of priests and an increasing number of lay persons constantly active in society is promoting unity and respect for all.

In 2020 the Catholic Diocese will continue in its effort and actions to help boost national initiatives to uphold social and family values in our society. 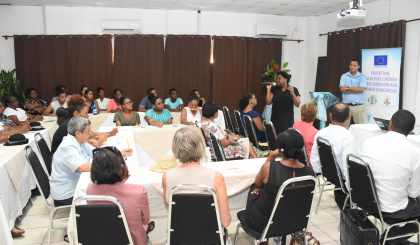 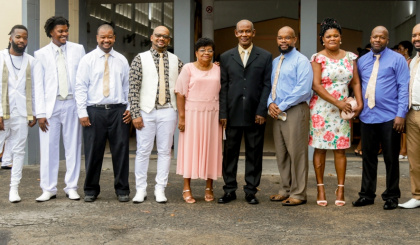 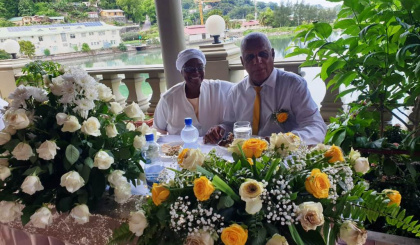