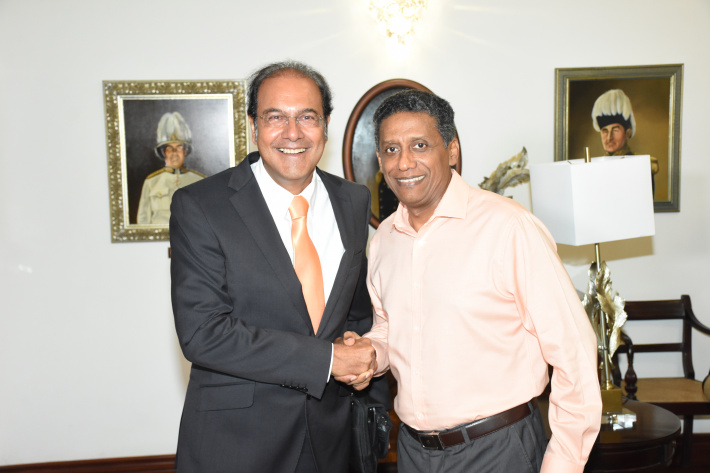 Newly appointed Minister for Housing and Land Use in Mauritius, Steven Obeegadoo, called on President Danny Faure at State House yesterday morning, for a brief visit in which they discussed the relations between the two nations and avenues for future collaborations, among other topics.

Minister Obeegadoo, a minister from the newly elected government under the leadership of the new Prime Minister Pravind Jugnauth, from the L’Alliance Mauricien political party, which was elected during the last elections held last month, is currently on holiday in Seychelles and is set to depart today (December 31).

“I am actually not on an official visit but I decided to pay a visit to President Faure, who was at the same time as me the Minister for Education towards the end of 2005, when I left my position. At the time, we worked closely together and it is with immense pleasure that I was able to see him today, to catch up and discuss the progress we have both made since then,” said Minister Obeegadoo.

“The visit was also an opportunity to pass on Prime Minister Jugnauth’s best wishes to President Faure and to express not only his wishes, but the determination to work closely together in future, as we have many things in our future in common, especially relating to our seas,” Minister Obeegadoo noted.

On his part President Faure said: “Your visit to Seychelles is another chance for our two countries to reinforce the long-standing friendship and further develop cooperation in the coming future. I would like to take this opportunity to thank the Republic of Mauritius for the excellent cooperation and partnership with Seychelles throughout this year. We look forward to another year of fruitful engagements across different areas for the mutual benefits of our people.”

Among the other points discussed by the two are the blue economy and climate change as well as the challenges that the Indian Ocean region is faced with.