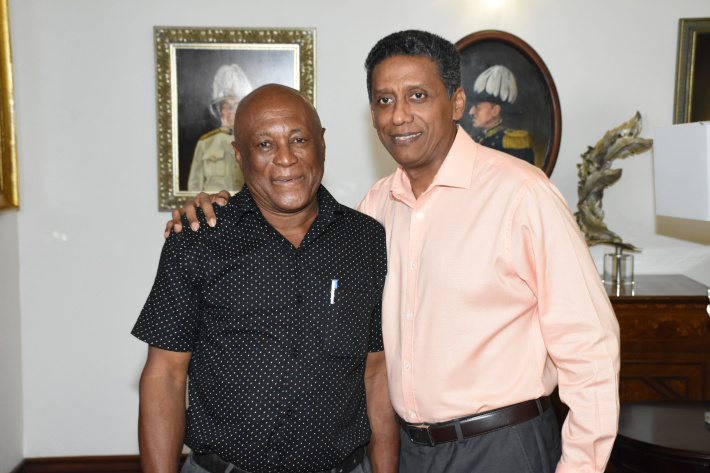 Celebrated local singer John Wirtz was yesterday congratulated and honoured by President Danny Faure at State House for his continuous contributions to the local entertainment and music scene during his long career as a musician, spanning back over 40 years.

Following a brief discussion with the President, Mr Wirtz performed one of his best-known New Year hits ‘Bonn Ane’ for the President, before posing for a souvenir photograph alongside Ambassador for Culture Patrick Victor, who was also present for the meet.

“The President said he really appreciates my songs, which are still making the rounds on the radio waves. In particular he commended me on the song ‘Bonn Anne’ which I released 51 years ago and is still one of the most loved New Year songs to this day,” Mr Wirtz said.

Mr Wirtz who started singing shortly after he completed his studies in 1966, is to be presented with a trophy by President Faure in the near future, as a token of appreciation for his tireless musical contributions.

“I am very happy to be recognised in my own country. I have been recognised in France and was presented with a trophy there too so I am happy that now my own country is recognising my musical contributions. The highlights of my career, when there were the Top 10 charts, I would make the local charts almost every week. I was also invited to play at numerous weddings over the years and that was always something I enjoyed as the couples would always enjoy the music and show their appreciation,” added Mr Wirtz.

“One of my other highlights was a performance in St Denis, France which was greatly appreciated by the Haitian population there. I also performed two shows in Western London and it was packed beyond my expectations and I later learned that some people travelled quite far from France just to see my performance and that made me happy,” Mr Wirtz concluded.