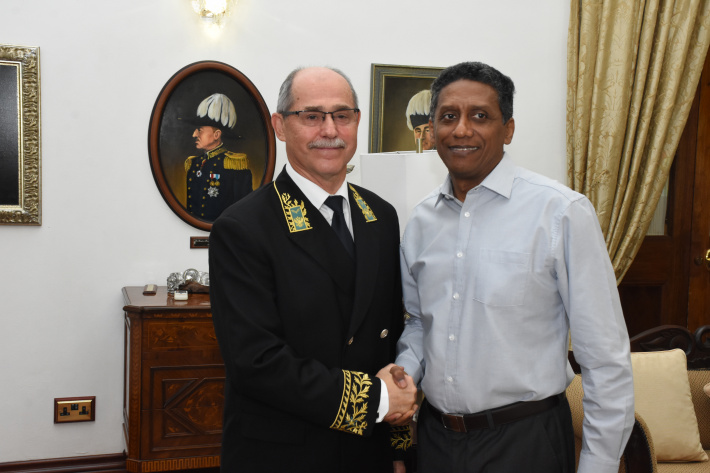 After six years as the residing ambassador of the Russian Federation to the Republic of Seychelles, Vladimir Belous is bidding farewell to our country.

On Tuesday morning at State House, he made a farewell call on the head of state, President Danny Faure.

Following his visit to President Faure, Ambassador Belous said that they discussed the continued bilateral relations between the two countries which he said are based on mutual respect and human interest.

Ambassador Belous said that one of his best achievements is to have been able to help Seychelles, through the signing of the bilateral agreement for visa free travel by Seychellois to the Russian Federation and also in getting Seychelles to attend the first-ever Russia-Africa Summit and Economic Forum, held in Sochi, Russia, last October 23-24, 2019. President Faure attended the summit.

He noted that apart from developing immensely the people to people context between the two countries, the visa free travel had also allowed the pillar of our economy, tourism, to strengthen further.

He said that through his successor, the Russian Federation will continue to work with Seychelles to further strengthen the bilateral relations.

Ambassador Belous, who is expected to leave at the end of January 2020, said that he will miss the country and the many friends he has made during his stay but hopes to come back for visits with his family.

“I’d like to, on the eve of new year, wish that 2020 be a very successful and peaceful year for Seychelles, filled with joyful and bright events and that good health, happiness, prosperity and luck be in every Seychellois families,” said Ambassador Belous who was also instrumental in the first Seychelles-Russia Business Forum in November 2014, held at Eden Blue Hotel, Eden Island.

Ambassador Belous, presented his credentials to former President James Michel on November 19, 2013 and during his time he was also the dean of the diplomatic corps in Seychelles. Seychelles and Russia established diplomatic relations in June 1976.