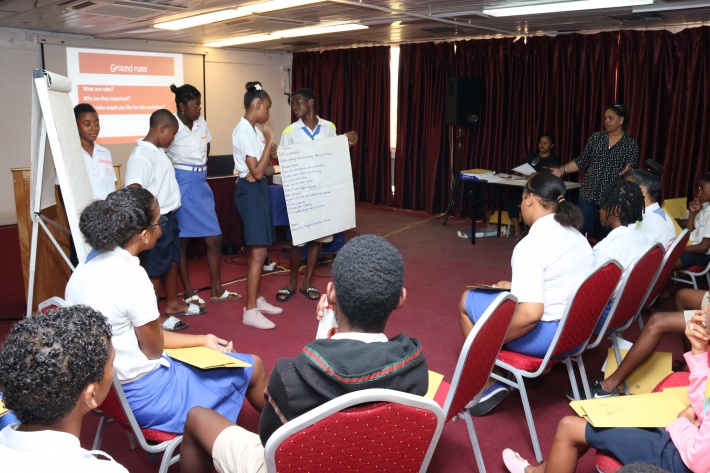 The session in full swing

‘Stand up Step up Seychelles’, in collaboration with the Ministry of Education and Human Resource Development, is organising a three-day anti-bullying workshop for peer education students from secondary and primary schools on Mahé and Praslin.

The workshop’s theme, ‘Students of Today, Leaders of Tomorrow,’ is a follow up from last year’s workshop for another group of students which was launched at the Seychelles Institute for Teacher Education (Site). The aim of this programme is to empower young secondary schools peer education students in leadership skills and campaigning skills with the idea that they go back into their schools and develop campaigns around anti-bullying.

Present at the launch of the second workshop yesterday was the principal secretary for Youth and Sports, Fabien Palmyre. He told the young peer educators that as soldiers in the battle against bullying, they should stand strong to what they think they are doing is right.

Stand up Step up Seychelles’ main focus is to empower young people to empower one another in the fight against bullying.

Its chairman, Trevor Louise, said that since the anti-bullying NGO has taken the stands to advocate and sensitise against bullying, people are more conscious and more aware of the subject.

He noted that bullying in schools is on the decrease due to targeted anti-bullying programmes in schools and also from backlash from the public.

“There are certain improvements with regard to bullying in the country in general but there are still more work to be done, by all stakeholders, to further reduce this malpractice.”

The three day anti-bullying capacity building training for new peer education students from S2 to S4, which started yesterday morning at the International Conference Centre (ICCS), is being run by facilitators Craig Francourt and Patricia Francourt from CTF Consultancy.

After the three-day training the students are expected to go back to their schools and implement projects to do with anti-bullying to try and raise awareness and make a difference in terms of the bullying problems in their schools.

Mr Louise said that even though there is big talk on anti-bullying, the association as a helping partner still lacks support from stakeholders to tackle the issue.

He however thanked those who have given the association a helping hand.

He noted it was a pity that the La Digue secondary school could not make it for the second time in a row due to unforseen circumstances announced by the school.

“We would have appreciated if we could have had more support from the Ministry of Education in getting students to attend our training. We need more support from this side and funding is also one of our main challenges to running of our programme. Everything is expensive and we have to cater for students coming from the outer islands,” said Mr Louise.

In their testimonies, two students from the Mont Fleuri secondary school who were on the first programme said bullying at their school has decrease considerably due to their intervention campaigns and also from the anti-bullying policy put in place by the Ministry of Education.

“So far we have oragnised counselling classes and empowerment sessions for both bullies and victims on the subject of bullying and also visits to the Montagne Posée prison where through talking to prisoners they got an insight of the consequences of unacceptable behaviour such as bullying.

For students being bullied, they have had the opportunity to attend self defence classes, not to seek fights but to able to contain the effect of bullying on them,” said Maris Anacoura, S4 peer educator.

As for Misael Bristol, S5 headboy, he said that in 2017 there were 56 cases of bullying in the compound of Mont Fleuri secondary school, with some cases of violence, compared to only three for 2018. He noted that no cases have been recorded in the school compound till now. 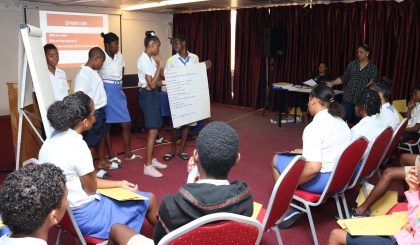 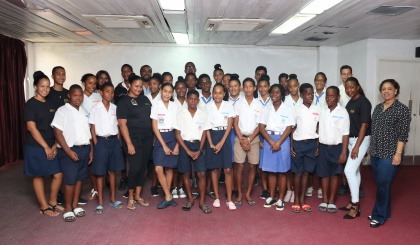 Students and facilitators in a souvenir photograph