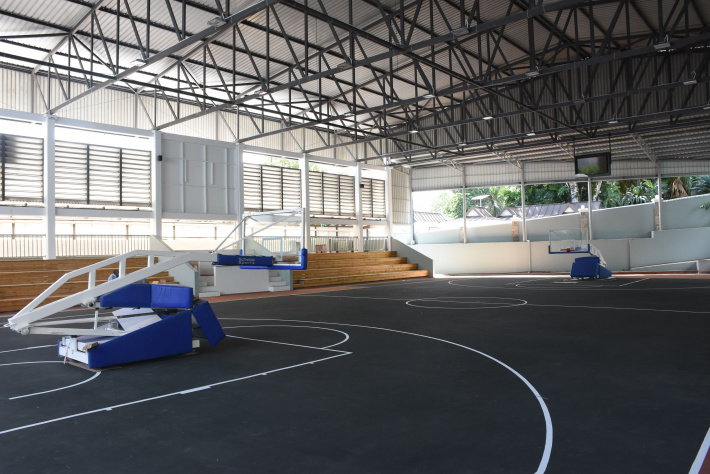 After a delay of over two years, the renovation works on the iconic Victoria Gymnasium have completed and the venue, including the sports facilities, administrative blocks, toilets, showers and lockers have already been handed over to the sporting federations who will use them.

The maintenance works on the facility started in October 2017 and according to the initial plan, the process was supposed to last four months.

According to the project manager at the National Sports Council (NSC) at that time Percy Vidot, other than new roofing and sitting arrangements, the project was to also include two practice courts behind the office block, while the players were to enjoy playing on new timber flooring, which should greatly improve the aesthetics of the arena.

Louvered sides to the whole gymnasium, making it look like an indoor facility was also part of the four-month project with SLB Building as the initial contractor.

Having bitten more than it could chew, the contractor had to abandon the project, halting the renovation works for more than a year, thus putting local basketball hostage.

In the meantime, basketball had to share the Palais des Sports with handball and volleyball.

The re-launch of the renovation project

Upon joining the NSC as the new project officer in November 2018, Denis Cesar took over as the person overseeing the project which had just been re-launched with Atom Engineering as the new consultant and Vijay Construction (Pty) Ltd as the new contractor.

Mr Cesar said that after joining the NSC, he went through the project files and noticed several back and forth between different authorities, including the NSC regarding the project, especially in identifying a competent candidate for the job, following the failure of the previous contractor.

As the project officer, Mr Cesar made it his priority to follow closely, ensuring that the work went as planned, until the facility was handed over to the SBF and SBA in early November last year.

Based on his experience in the field, Mr Cesar explained that the failure to assess the scope of the work and the load it carries have been the main causes of failure on the part of the previous contractors.

Initially a car park, the gymnasium was not properly designed to discharge such functions, therefore maintenance work to standardise it up to the required level carried a big load.

Mr Cesar noted that the layers of surface added over the years helped to lower the standard of the basketball court.

He explained that being 25m by 15m was not up to required standard; therefore it has been extended to become 28m by 15m as required by the Fédération Internationale de Basketball (Fiba).

As for the height – distance from court to roof – which is 7m per the Fiba requirement, digging work had to be done to remove the excess layers on the floor.

A Roman Blind system is also on trial to try and contain water during the rainy season, since the venue was not initially designated as a sporting ground.

Roman Blind is thin cording threaded through individually sewn rings found in sections of the blind fabric and it's this that allows for pleats to be created in the material as the cord is steadily pulled, enabling the blind to form and re-adjust when required in your chosen window space.

New sitting arrangements are also in place, targeting approximately 500 spectators at one time.

Mr Cesar noted that all seats will be numbered and spectators will sit according to their ticket numbers to maintain order at the venue at all times.

The Victoria Gymnasium is also equipped with new Philips high-bay lights (a powerful light source that can brighten up a large area).

A new feature in place at the newly renovated gymnasium is the crowd-control methods. A new ticket booth has been built, while gates have been installed to regulate movements, in and out of the venue.

Commenting on the timber flooring which was the highlight of the initial renovation plan, Mr Cesar said any chosen surface should suit the environment, taking into account issues such as weather and humidity.

Being an open venue, Victoria Gymnasium is not suitable to have timber flooring.

Mr Cesar further explained that, even if the Roman blind can, to some extent, prevent rain from reaching the playing court, it is still no guarantee that timber flooring will survive the local climate with the venue being an open one.

The playing court is now surfaced with a special outdoor coating which other than being suitable for the local weather is also water resistant.

Other than the playing court, the basketball players will also benefit from two new changing rooms, equipped with shower facilities and safe lockers.

Based at the Victoria Gymnasium for so many years, the boxers will also benefit from the project, notably with a new training facility, along with new showers and technical rooms for coaches and officials.

In terms of buildings and infrastructures, two public toilets have been built, along with various offices.

Sports officers for basketball and boxing will have their own offices, while the warden or caretaker of the facility will also have his own office.

A conference room is also in place, along with toilet facilities for VIPs during official events.

Who will benefit from the new basketball facility?

After so much hassle, the much-awaited basketball facility is finally ready, but the big question remains, who will benefit from it?

With basketball frozen since last year, pending investigation of the SBF regarding debts and fraudulent accounts, it is clear that the new facility will not be in use, at least for serious competition any time soon.

According to the director for sports federations and management within the NSC, Terrence Barbé, the venue will be mostly occupied by various youth development programmes.

Mr Barbé explained that the various local academies will be the main beneficiaries, while the NSC will soon introduce two junior leagues, precisely under-14 and under-16.

He further explained that the leagues will be run by the NSC, while the SBF will not be involved with the running of basketball until it sorts out its legal issues.

Built in 1970s and renovated for the 1993 and 2011 Indian Ocean Island Games which Seychelles hosted, the facility is covered completely but open spaces at two ends allow rain to flood the playing court, especially near the two ring posts, making the surface slippery and dangerous at times.

The accompanying photos taken by Thomas Meriton show the different facilities at the revamped Victoria Gymnasium. 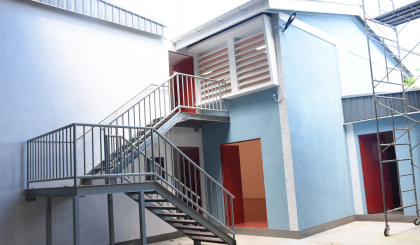