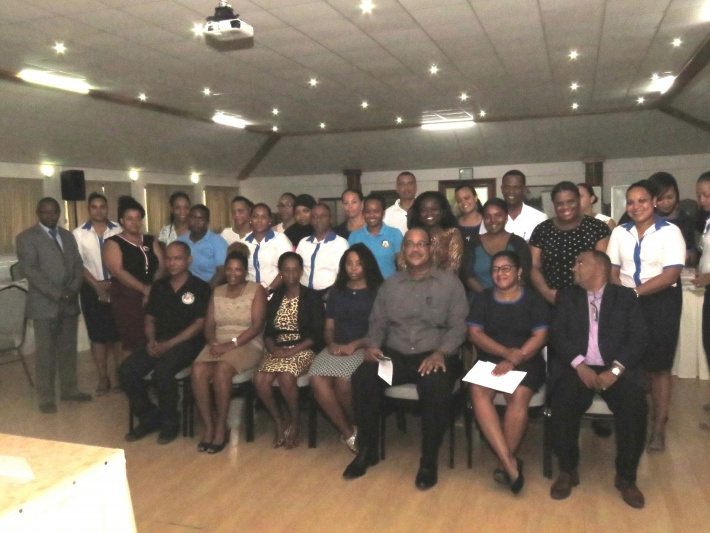 The Drug Advisory Programme (DAP) of the Colombo Plan and the Office of the Secretary of State for Prevention of Drug Abuse and Rehabilitation launched a 10-day workshop on the Universal Treatment Curriculum (UTC) on Monday at the STC conference room.

The workshop, attended by participants from various organisations such as Family Affairs, Ministry of Health, NIHSS, UniSey and Apdar, was launched by Dr Patrick Herminie.

Seychelles is the 22nd country that benefits from such a programme financed by the International Narcotic and Law Enforcement Agency, under the US government.

The aim of this workshop is to gear towards addiction practitioners concentrating on the basic levels for UTC, which consists of eight courses that cover the broad spectrum of addiction treatment.

Dr Herminie stated in his opening speech that “although the Colombo plan is an organisation whose primary objective is for the strengthening of economic and social development of countries in the Asia-Pacific region, they have answered the call of an African island state for help in our protracted war on drugs”.

Dr Herminie said that the drug epidemic has not only become a “huge public health problem but was becoming an existential threat to the country. The country was definitely ill-equipped to deal with the problem. Resources at all levels were scarce and the response had been limited to marches, workshops and a media campaign with little impact on the evolution of the epidemic. Apdar had to come with evidence-based demand reduction programme”.

Since then, Apdar has introduced a low-threshold methadone programme for 2000 youth including 150 prisoners. Apdar, in collaboration with the Ministry of Education, will also soon propose the establishment of a school-based prevention framework, whose main objective will be the introduction of comprehensive and targeted programmes to prevent drug use or abuse in schools.

In collaboration with the Ministry of Health, Apdar is also developing a programme for the management and treatment of pregnant women who abuse drugs.

“But Apdar is still faced with other major challenges, first and foremost that of ensuring the availability of adequately trained staff to provide psychosocial support. I need to reiterate that psychosocial support is key to relapse prevention. It is for this reason that we welcome this workshop which is being organised by Apdar and the Colombo Plan. This workshop will be instrumental in providing participants not just with comprehensive insight in addiction treatment but also will equip them with the necessary skills that will allow them to disseminate valuable information to others,” noted Dr Herminie.

Yvana Theresine, director of the Prevention and Education Division at Apdar, added that “the first series of workshop will focus on Physiology and Pharmacology and it will be done in several stages starting this week, followed by sessions in September, December and March 2020. Once the training is completed the nominees will sit an exam and if he/she is successful they can become a certified National Trainer for UTC”.

The workshop is being facilitated by George Murimi, Mahmoud Mussa and Yvonne Olando.

Facts about the drug situation in Seychelles

In 2017, Apdar was created by an act of parliament. Subsequent to that, an Integrated Biological and Behavioural Surveillance Survey (IBBS) was undertaken. The Respondent-driven Survey established that

- An estimated 5000 youths were addicted to heroin, a number that represents 5% of our population or 10% of our workforce.

- People who injected drugs represented 3.5% of the population and was responsible for 50% of new HIV infections and 99% of new Hepatitis C infections.

- The vast majority of persons abusing substances were between the ages of 15 and 35, 27% being women.

- 45% of all respondents have been abused between the ages of 8 to 14 yrs, showing trauma that is an important cause of addiction.

- Most of the young substance abusers were either unemployed or indulging in criminal activities to secure their next fix.

- An earlier survey conducted among secondary school children established the shocking fact that 9% of them had used marijuana in the previous month and 14% had experimented with other drugs like cocaine and heroin.

- Another IBBS was conducted in the Seychelles Prison last year which revealed that 92% of inmates were found to be using drugs, mainly heroin. 25.5% were HIV positive and 41% tested positive for Hepatitis C.