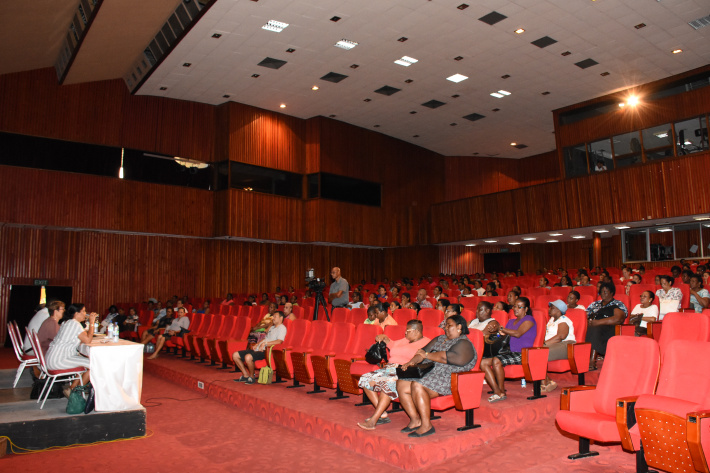 The meeting with the home carers on Thursday (Photo: Louis Toussaint)

The Ministry of Family and Social Affairs, headed by Minister Mitcy Larue, on Thursday held the last of a series of consultative meetings with home carers as it progresses in its efforts to draft a policy to address the challenges that they are faced with and improve the quality of care given to elderly and disabled persons for whom they care.

Over 300 home carers from the Anse au Pins, Cascade, Pointe Larue and Les Mamelles districts attended the meet held at the International Conference Centre (ICCS), chaired by Minister Larue, chief executive of the Agency for Social Protection (ASP) Marcus Simeon, representative of the Ministry of Health Bella Henderson and chief executive of the National Council for the Elderly (NEC) Marie-France Pereira.

To commence the meet, Minister Larue explained the objectives of the reform in the home carer system emphasising the need to establish a system for home carers, in line with the criteria established by the World Health Organisation (WHO) in its latest publication, released 2019.

Minister Larue made reference to mandatory training and development sessions to be introduced under the policy, in a bid to improve the level of care given to elderly and disabled patients and to eliminate abuses in the system including absenteeism and abuse of patients.

Furthermore, she noted the need to formalise the profession to allow home carers to also benefit from initiatives such as salary increases, long-service allowances and gratuity payments at the end of their employment that other public servants benefit from.

“For the time being, carers are employed with the family of the patient for which they are caring and ASP is only responsible for paying carers to an amount of R70 million annually. While you benefit from 21 days annual leave and your 13th month salary, unlike other public servants, you do not benefit from other initiatives which make it difficult to access loans. Moreover, carers don’t have a job description, making it hard to know their rights, responsibilities and duties and that is the reason we want your input, so we can draft a policy that takes your needs into account,” Minister Larue said, addressing all the carers present.

Other proposed provisions to be included in the policy include recruitment of staff for monitoring and evaluation of the level of care being carried out by carers, mandatory registration for all home-carers with the NCE, as well as meetings with the families of individuals requiring home-care to determine the needs of specific patients and ensure the level of care they are given meets such needs.

While some of the carers were onboard with the idea of mandatory training for all home carers, a requirement which could also work to their advantage in future should they wish to pursue a career as nursing assistants, others noted that they have been working as carers for over three or four decades and therefore feel as though they are either too old or knowledgeable enough to not have to follow the training courses.

Noting all the propositions and recommendations put forth by the carers, Minister Larue thanked and commended them on their hard work, stating that it takes someone exceptional to become a carer on account of the demanding nature of the job, promising them that nobody will be left behind, but that their input will be included in the policy that is to be drafted this year, and which is expected to be implemented in 2021.