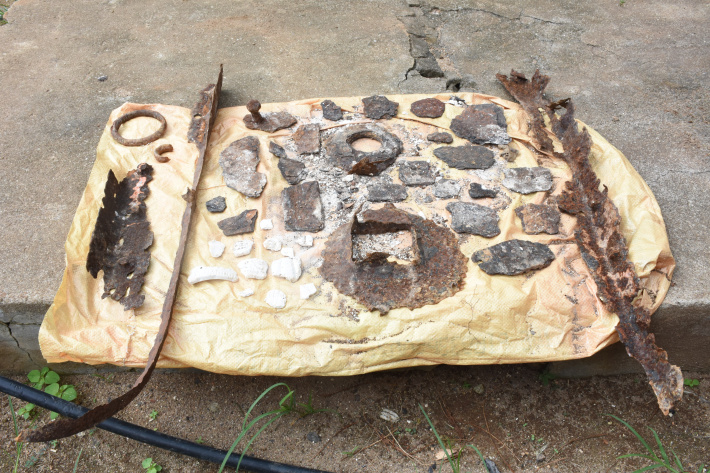 Some of the remnants unearthed (Photo: Thomas Meriton)

Two residents and the McQueen family of Fairyland, Anse Royale have been left baffled and bemused upon discovering a mysterious hole dug on their property, it would appear during the dead of night, on January 2.

The hole, on the property located adjacent to the little island off Fairyland beach, Ile de Souris, was first discovered by Jean Claude Hoareau, a security guard by night, who is currently renting the property from Maryse McQueen who resides in Scotland.

According to Helm Sounadin, a relative of the owner of the property, he received a phone call from Mr Hoareau early on the morning of January 3, where he was instructed by Mr Hoareau to come over to the property to see something peculiar.

Upon arriving on the property and descending to the far end which borders the main road (leading to Anse Royale), he too saw the fairly large hole, along with some other remnants next to it, including two empty cigarette packets, what appears to be rusted metal and fragments of broken porcelain.

“The night of January 2, I saw a yacht stationed next to the little island, Ile de Souris. Usually the yachts park closer to the bay but this was a luxury yacht so I thought nothing of it and that the passengers were just enjoying a New Year’s cruise or snorkelling or such. The next day I received a phone call from Mr Hoareau asking me whether I had been on the property during the evening or night while he was at work and I said no, and he told me to come and see.”

“The position of the hole is not far from the main road and it would seem as though they came in through the bushes, took whatever was here and left. Close to the hole were two empty cigarette packets, one of the brand Milano and the other Dunhill, both of which appear to be duty-free and therefore not indicative of a specific sale country. Funny enough, there are no cigarette butts on the scene at all and that is to me very confusing. I would assume if they smoked the cigarettes as they were digging the hole, there would be cigarette butts visible on the floor but there weren’t any,” Mr Sounadin stated.

Asides from the empty cigarette packages, some old and indistinctive coins also appeared to have been left behind either by those who dug the hole, or from whatever was removed from the scene. Bizarrely, another small plot located behind the rock thought to be a marker had also been cordoned off by nylon string and sticks, although it remains to be dug.

“I have since been trying to find any links and whether there was any pirate activity in the region. I know at Bel Ombre they say the La Buse treasure at Bel Ombre but we want to know if this was maybe a treasure, to which some people had a map but if that was the case, that means they are foreigners and where did they get the map?” a confused Mr Sounadin questioned yesterday as he showed Seychelles NATION the mysterious hole.

While he is yet to solve the mystery, Mr Sounadin is certain that no family members of his would have buried anything on the said part of the property, which he recalls was covered with thick vegetation. His theory is geared more towards the possibility of a pirate treasure having been buried during the days when pirates ravaged the seas of the Indian Ocean, considering that the property is located not far from the beach.

“The whole property belonged to Alexandre Deltel and as far as I know, the only thing here was an old garage belonging to my father when he owned a motorcycle back in the 1920s as he was among the first people to own one and he would keep it here but that is it. When I was younger, this whole area was overgrown and I had never even necessarily noticed the rock, but the more I look at the rock now, the more I think it is a marker,” Mr Sounadin added.

Despite having called the police on the morning of January 3 after the discovery, the mystery of the unexplained hole remains unsolved. 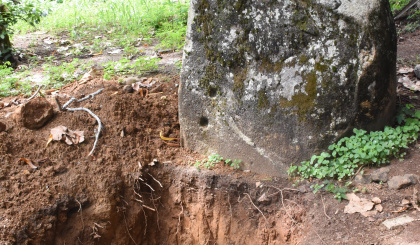