Together we can protect and restore our ocean | 12 June 2019 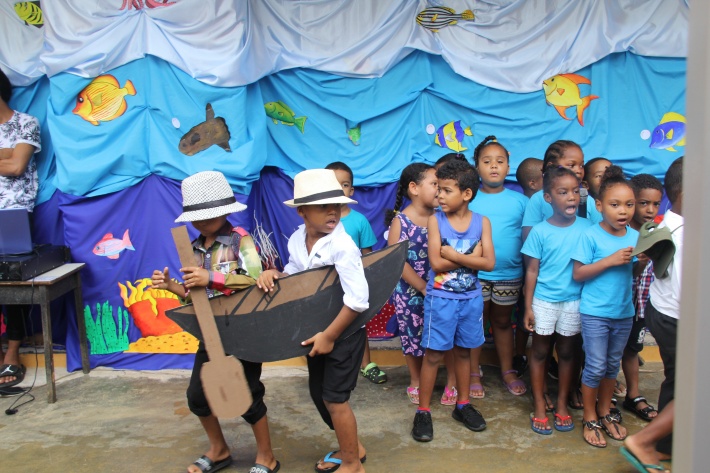 One of the sketches

Just as scientists are starting to make sense of the mysteries of the oceans’ depths, the world’s waters are under serious threat.

Rising temperatures caused by human activities are melting ice caps and pushing sea levels up globally, but there’s more. From shorelines to thousands of feet below the ocean surface, trash is finding its way into the seas and into the bellies of marine animals. Dolphins, turtles, whales, and fish are all ingesting our plastics.

On Saturday June 8, Seychelles celebrated World Oceans Day with the rest of the world and throughout the week various activities were organised to mark this day.

Yesterday, the Youth Advisory Council and the Sids Youth AIMS HUB (SYAH) with the collaboration of the Beau Vallon primary organised a special assembly to commemorate this day. The assembly featured presentations from organisations such as the James Michel Foundation, while the Ocean Project Seychelles organised various sketches, songs and poems from students.

“Having an exclusive economic zone which is greater than the country’s land mass, it is only fitting that we as a small nation take the time to celebrate the beautiful ocean that surrounds us,” said deputy head teacher Sheryl Kilindo in her opening speech.

Ms Kilindo added that we must not forget to protect our oceans to make sure that the next generation will also get a chance to enjoy them.

“As this year’s theme rightfully says together we can protect and restore our oceans,” the deputy head teacher concluded.

“The assembly marks the end of a three-month programme that we have conducted with Beau Vallon school since March where the students were taught about plastic pollution and the importance of marine conservation as well as the value of the oceans to Seychelles,” said Shantana Barbé, member of the World Ocean Day advisory council.

Ms Barbé added that education about the ocean and marine life starts at a young age and the children will then hopefully grow up with a sense of appreciation for the ocean where they will spread the message throughout the community.

Noah Rose, Ella Alvis and Joseph Julie were among the dozens of children who attended the assembly and they believe that the ocean plays a pivotal role in the economy.

“We need to start treating the ocean better and clean our trash when we go to the beach so as to not add to the damages plastic pollution has done throughout the year,” said Ella Alvis.

The assembly ended with a pledge where the students swore to protect and care for the ocean. 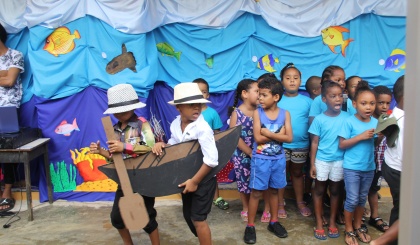 One of the sketches 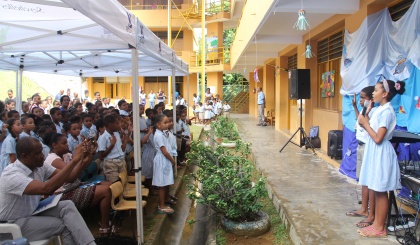 The students pledging to protect and care for the ocean