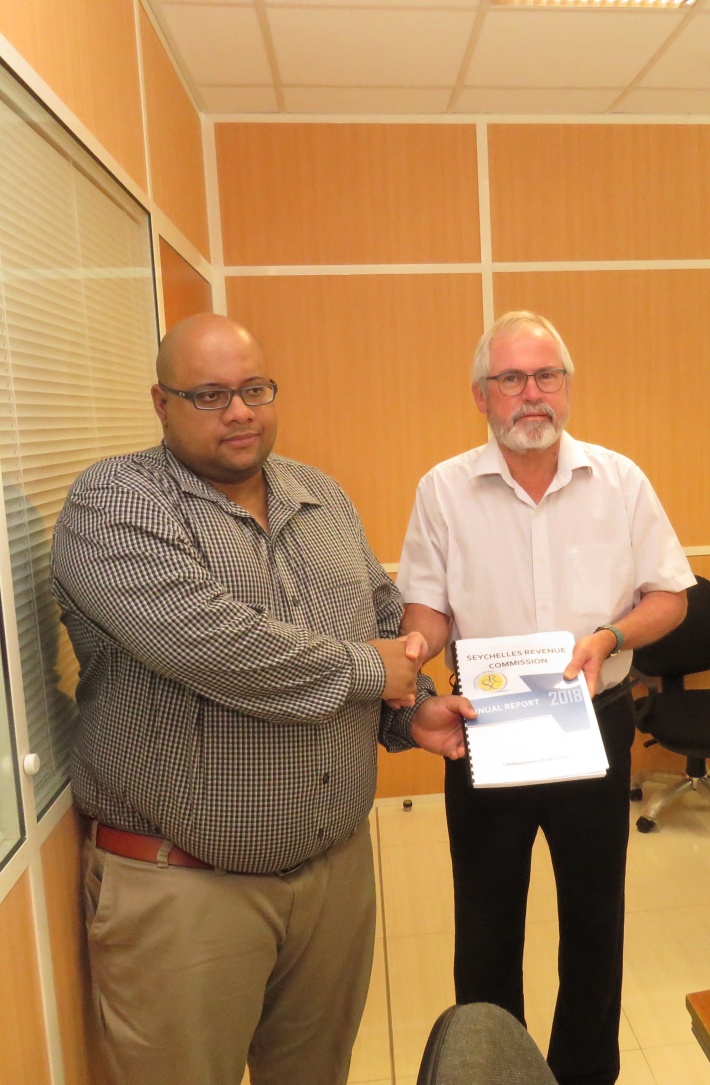 Mr Morel hands over the report to Minister Loustau-Lalanne

Acting Commissioner General of SRC, Fred Morel, officially handed over the report to Minister Loustau-Lalanne during SRC’s 12th special session of its governing board.

The annual report provides details for financial year starting from January 2018 to December 2018.

During this period, SRC recorded a total tax revenue of R7.2 billion which is 9% above the forecast for 2018 and which exceeds the R6.5 billion collected in 2017.

Value Added Tax (VAT) remained the main driver of revenue with 38% of total receipts followed by business tax at 20%, excise tax at 19% and income tax at 14%.

Although he had yet to fully read the report, Minister Loustau-Lalanne said that he is happy on the fact that SRC has been able to not only achieve its targets but surpass them.

“This [report] has been submitted to me this morning by law and I will then study the document, and the report will be submitted to the National Assembly as required because it will become a public document,” the minister noted.

The special board session also saw the introduction of two newly appointed board members: Zenabe Daman and James Elisabeth who replaces Robert Grandcourt and Steve Jardine.

Both former members resigned from the Commission due to various reasons.

In relation to this, Minister Loustau-Lalanne noted that members have a liberty to resign at any time, as prescribed by the law, and that their decisions to do are not normally questioned.

“We have appointed two new members who have the experience, the knowledge and the professionalism to take an active part in the work of the SRC and I am sure they will fulfil their mandate properly.”

The session also involved discussions on ways the SRC and the Ministry of Finance, Trade, Investment and Economic Planning can improve on their communications.

SRC is expected to provide a more detailed analysis of their annual report at a later date.