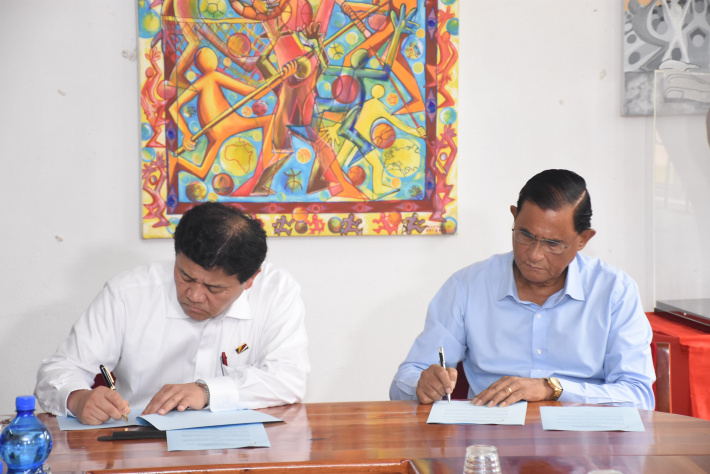 The signing of the agreement (Photo: Thomas Meriton)

Seychelles and the town of Aya in Japan will from now on be involved in exchange programmes in the field of sports following the signing of an agreement between the Japanese town and the Seychelles Olympic and Commonwealth Games Association.

The memorandum of understanding (MoU) was signed yesterday by Seychelles Olympic and Commonwealth Games Association (Socga) president, Antonio Gopal, and the Mayor of Aya Town, Manabu Momita, at the association’s head office at Stad Linite, in the presence of the Japanese ambassador to Seychelles, Makoto Tominaga, Socga’s executive committee members and members of the delegation from Aya Town.

Yesterday’s signing was part of the series of visits which brought the Japanese delegation to the department of environment, the office of the Designated Minister and the National Sports Council.

After the signing, Mr Gopal noted that even if Japan is hosting the next Olympics Games later this year, the MoU goes beyond that.

He added that the agreement will open doors for future exchanges which will help boost the development of sports in Seychelles, while it will also boost bilateral cooperation between the two countries.

Other than inviting the Seychelles delegation at the Olympic Games to Aya Town, Mr Momita said the agreement is only the beginning of a new chapter between the two parties.

Aya Town, almost in the centre of Miyazaki Prefecture, is located about 20km west of Miyazaki City, the prefecture transportation hub, bordering with Nishimera to the north, Kunitomi to the east, Miyazaki City to the south and Kobayashi to the west.

Although the town has a flat land in the east sandwiched by the Ayaminami River and the Ayakita River, both of which are part of the Oyodo water system, a vast forest spreads in the north-western part of the town. The annual average temperature is 17 degrees, and it has a warm and wet climate with an annual rainfall of 2,639mm.

Aya Town, which has the largest laurel forest in Japan that stretches as far as the Ayakawa Valley, promotes urban development in harmony with nature. It was registered as a Unesco Eco-Park in 2012. The ‘Aya Teruha Suspension Bridge’, which is 142m high and 250m long, is situated in the laurel forest zone. Walking on the bridge is like walking in the air and offers a view full of greenery and a panoramic sky.

For eight consecutive years it has won second place in the souvenir facility provider award category.