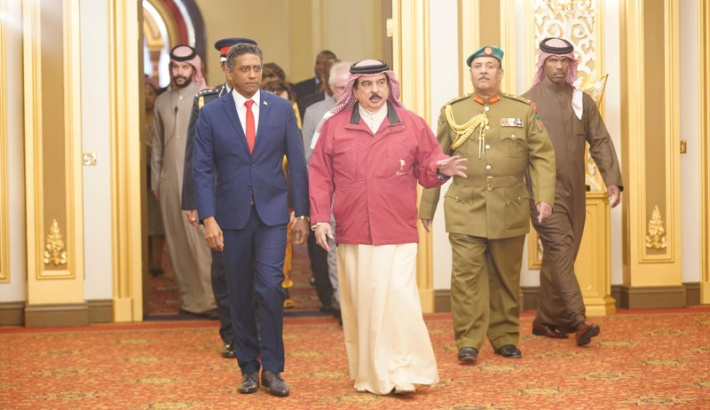 The president conveyed the warm greetings of the people and government of Seychelles to His Majesty, while King Hamad Bin Isa al-Khalifa recounted fond memories of his first visit to Seychelles.

“This is the first state visit by a President of Seychelles. Today is a historical day for my country and a turning point in the relationship shared between our two nations. Thirty-six years since we established diplomatic relations, I am here to further cement the warm ties between Seychelles and the Kingdom of Bahrain,” said President Faure.

During discussions, the president and His Majesty acknowledged the extent of development which the two island nations have accomplished during the past decade in the common pursuit for prosperity of its peoples.

“I am certain that this visit will yield more possibilities for cooperation between Seychelles and Bahrain and I look forward to the results,” added President Faure.

Also yesterday afternoon, Seychelles and the Kingdom of Bahrain further cemented relations between the two island nations through the signing of a series of agreements.

President Faure is accompanied on his visit to Bahrain by a high-level delegation, comprising the Minister for Finance, Trade, Investment and Economic Planning Maurice Loustau-Lalanne, principal secretaries and other top-ranking officials in government.

Bahrain and Seychelles established diplomatic relations on May 4, 1983.